Phoenix outpaced by USF in season-opener 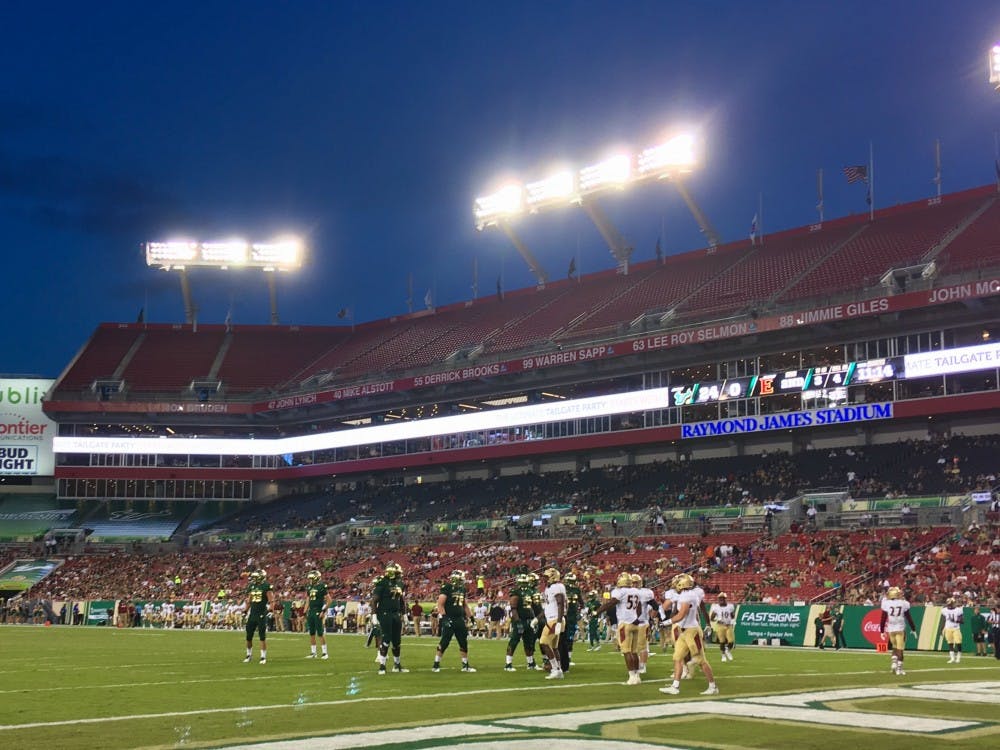 TAMPA, Fla. – The Elon University football team found itself outmuscled and outmatched in Raymond James Stadium Saturday night. The University of South Florida rolled to a 34-14 victory behind a pace that proved a handful for the FCS visitors.

Elon returned most of their best players on both sides of the ball, but the experience and confidence they gained during last fall’s landmark season wasn’t enough to push them past an FBS opponent on the road.

The Phoenix offense never truly had time to shine in the face of a hard-nosed defensive effort from South Florida. Saturday’s performance, though, gave plenty of hints that Elon’s ground game could be a threat as the season rolls on.

Senior running back Malcolm Summers was in his first game back after a hamstring tear on Oct. 7 last year sidelined him for the remainder of the season. He was brimming with excitement during his first series on the field, jumping up and down after muscling his way to a first down.

Summers put up ludicrous yardage stats before his season was cut short in 2017, and it looked like Curt Cignetti might be trying to position him for similar numbers this year. He took 11 handoffs for 49 yards in the first quarter alone before letting backups take over the latter part of the lopsided affair.

As the night went on, there were some chances to glimpse Elon’s depth in the back position. Sophomore running back Brelynd Cyphers got his fair share of carries, including a touchdown from point blank range. True freshman running back Jaylan Thomas showed some flashes of brilliance from when he was called to action in the second half. The eighteen-year-old looked confident on the big stage, averaging 9.7 yards per carry on nine attempts.

“With a freshman coming in the first game and playing as well as he did, that’s got to be a good feeling for him," said sophomore quarterback Davis Cheek. "Just to know that he can do this on that level.”

Fittingly, Elon's first points of the year came on the ground, even though they were scored by a quarterback. Sophomore second-stringer Jalen Greene swept around to the right side of the line and was home free for six points in the third quarter. Both of Elon’s touchdowns came from backups during a second half in which most of both teams' starters were benched.

The passing game sagged against a relentless USF backfield. Elon’s two quarterbacks combined for an uninspiring six completions and 42 total yards on the night. The only Phoenix receiver with double-digit receiving yards was sophomore Kortez Weeks, who pulled in a team-leading two catches for 24 yards.

“We proved we can move the ball,” Cheek said. “We just didn’t do it enough. And a lot of that is on me.”

USF’s corners and safeties were completely locked down, and their physicality forced the Phoenix into errors. Cheek was intercepted twice. The first pick popped out of a receiver’s hands when junior Cole Taylor was rocked by a defender and lost control of the ball. The second also touched an Elon wideout before finding its way to a green USF jersey. The pair of turnovers was much more the fault of high-pressure defense than inaccuracy on the part of Cheek.

Where Elon’s offense faltered, USF’s exploded. Before the game, there were a few questions about how the Bulls would make up for a long list of offensive losses, but they may have found an answer against the Phoenix.

Quarterback Blake Barnett has spent most of the past four years at big schools, hungry for play time. After stints at Alabama and Arizona State, he came to South Florida as a grad transfer. He got the nod to start this week and put up numbers that should help lock him in as the Bulls’ starter. Barnett racked up 305 yards while going 24-34, scoring three touchdowns along the way.

As is often the case when an FCS team takes on an FBS opponent, it was sheer physicality that provided the biggest advantage. Nowhere was that more visible than the occasions where USF receivers motored past Elon corners to get wide open. Barnett was lofting bombs downfield and had no trouble hitting his targets. One of his favorites, Randall St. Felix, looked particularly sharp. He opened the game’s scoring in the first quarter, absolutely scorching junior defensive back Zavier Williams for a 40-yard touchdown.

“We made a couple adjustments and then we ended up playing the deep ball much better," said Cignetti. "I think that's going to be great experience for our corners to have to defend those kinds of guys deep. We probably don’t challenge them enough in practice.”

The results of those adjustments will be on display in only a week as the Phoenix returns home for a showdown with Furman University. The Paladins were a regular foe during Elon’s Southern Conference days and more recently knocked the Phoenix out of the FCS playoffs last November.