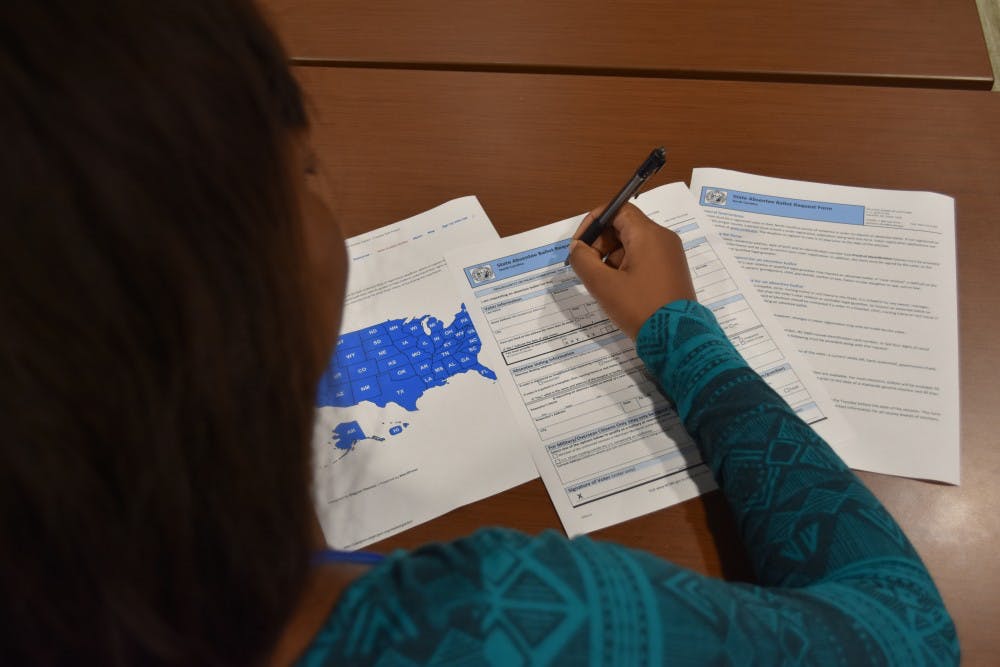 Senior Caroline Redd did not have an interest in politics until she arrived at Elon University. She saw the outcomes of elections around her and realized the importance of voting and its effect on her home community in Georgia. Because of this, Redd decided to vote via absentee ballot in order to make her voice heard in her home state.

“Originally I thought, 'That’s just another thing I’m going to have to do,'" Redd said. "But it’s not as complicated as I thought it was going to be. It’s just so exciting to see all these things you wish would happen for your state actually becoming a reality.”

Upperclassmen like Redd will participate in their second federal election as the midterm elections get closer. Freshmen and sophomore students will have their first opportunity to vote in a federal election with the midterms on Nov. 6, 2018. These are held every four years to elect new members to Congress. This will help determine which political party will control the House and Senate for the next four years.

The Elon student body is 82 percent out of state. Elon University's organization Elon Votes provides a resource on campus to help students either register in North Carolina or register for absentee ballots. Ellie Snyder, Elon Votes coordinator, says the organization has spent the first weeks of the year ensuring as many students as possible are registered and prepared to cast their ballot in the upcoming midterms.

“We deserve to be represented,” Snyder said. “And we deserve to have our voice heard, and voting is the best way to do that.”

Elon Votes will have a booth set up at every College Coffee in the month of September, and Snyder says they hope people will want to volunteer at these booths as well as join the organization.

Besides helping with absentee ballots, Snyder said the organization also helps with providing information and resources on North Carolina voter registration access, voting in Alamance County and even giving overviews of the candidates in upcoming elections so students can form valid opinions and understand what their votes mean.

Freshman Jack Corby came to Elon as a student registered in Virginia and received help from Elon Votes regarding midterm elections.

“Elon Votes helped me pick which option was right for me and made the process very easy," Corby said. "The best thing about Elon Votes is how simple and straightforward it is.”

U.S. citizens have the ability to register around the age of 18 within their state of residency, but Elon students come from diverse geographic backgrounds. Choosing to register in North Carolina is an option, but one has to have lived in the state for at least one year before being able to claim residency, according to the North Carolina State Board of Elections website. In that case, absentee ballots are a viable option for college students voting outside of the state they are registered in without actually having to attend the polling site of their home state.

Elon Votes is housed in the Kernodle Center for Service Learning and Community Engagement in Moseley 230. Absentee ballot applications must be delivered by 5 p.m. the Tuesday before Election Day.