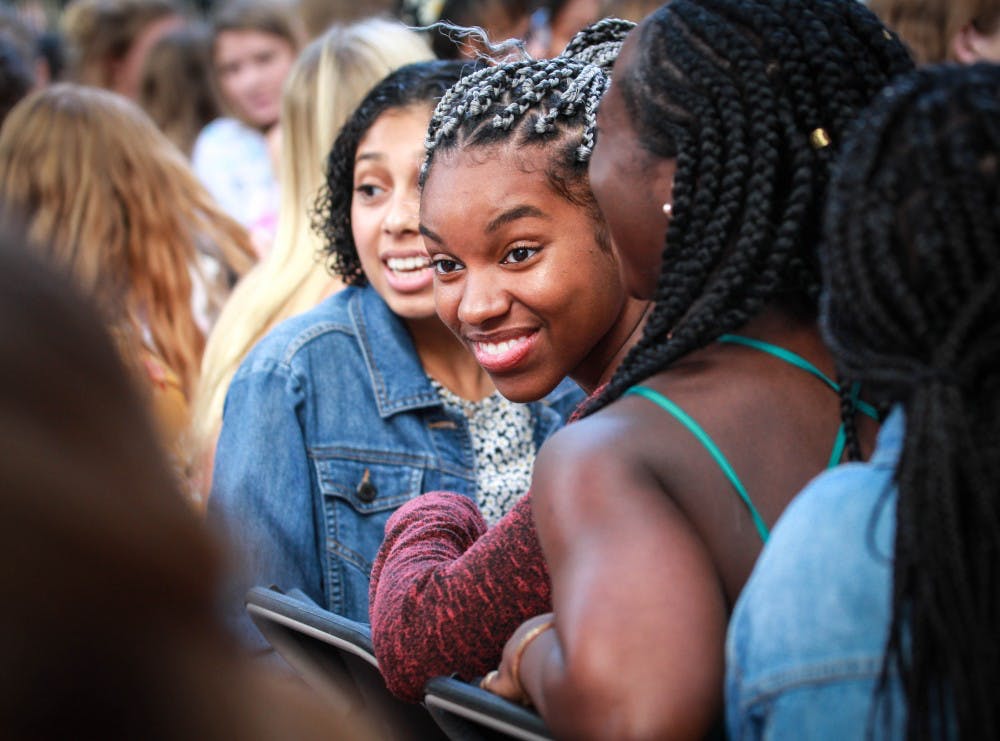 Freshman Paige Wilson smiles during the "know your neighbor" exercise during New Student Convocation outside of West Hall on Saturday, August 25. [Abby Gibbs].

This morning, 1,747 new students were officially welcomed to Elon University "Under the Oaks" at New Student Convocation.

The event began with remarks from Jan Fuller, university chaplain. Fuller explained the meaning of the university’s motto “Numen Lumen” – intellectual and spiritual light – which set the tone for the rest of the event.

SGA Executive President Kenneth Brown Jr. spoke about the conflicting emotions of starting college. He stressed to new students the importance of focusing on the current moment instead of the future. Brown challenged students to “learn how to leave” and escape their comfort zones. At the end of his speech, he urged students to let other people in and to help one another during their transition.

Jon Dooley, vice president for student life, and Randy Williams, associate vice president for campus engagement, introduced the class of 2022. Dooley said new students come from 42 states and 29 countries, and 130 are first-generation students. He talked about the importance of community and mentorship, as well as Elon’s commitment to global citizenship.

Williams then mentioned three standout students in the class of 2022, including Kali Clougherty, a graduate of Marjory Stoneman Douglas High School who performed with her classmates at the Tony Awards.

Steven House, provost and executive vice president,  then introduced the faculty, speaking to their commitment to engaged and experiential learning.

Then, President Connie Book took the stage for her first speech at New Student Convocation. In a lighthearted opening, Book called college an "everyday miracle," saying it “is the most formative educational journey of your life.”

She also talked about balancing mind, body and spirit, reflective of her new health and wellness initiative.

Towards the end of her speech, Book spoke extensively about intolerance, specifically racism, sexism and religious intolerance. She spoke at length about sexual violence and the place it will not have at Elon, she said. Quoting the university honor code, Book preached the values of honesty, integrity, responsibility and respect.

To end her speech, Book requested new students to proudly say, “I’m in.”