Phoenix fly high on the field and in the classroom 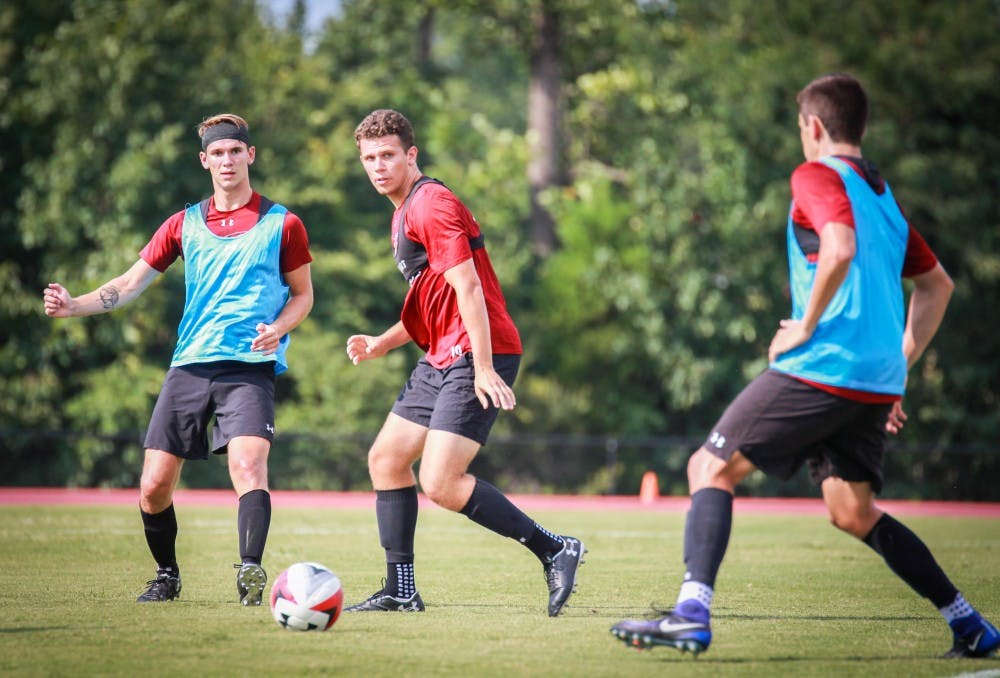 To even play at the Division I level, many athletes have already beaten the odds. Per the NCAA, male high school basketball players have exactly a one percent chance to play in the top collegiate division, and women have a slightly better chance at 1.2 percent. The odds don’t get much better, no matter what sport you play.

From there, the chances to make it to a professional league get even slimmer. Approximately 5,552 draft-eligible men’s soccer players across the NCAA will compete for just 88 draft spots in Major League Soccer.

With these metrics, it is up to schools to make sure they are preparing student-athletes beyond the fields of play and into their fields of study. That is where schools like Elon shine.

Elon time and time again is recognized for its academic excellence, with its student-athletes being honored annually on multiple platforms.

Elon’s men’s and women’s basketball, men’s cross country, lacrosse and volleyball were all recognized with the public recognition awards for the most recent multi-year Academic Progress Rate (APR) achievement. This was the fourth time in five years that Elon had at least five teams earn the honor and the eleventh year in a row the men’s basketball team scored a perfect 1,000.

Director of Athletics Dave Blank said in a statement, “This achievement demonstrates the commitment Elon student-athletes, coaches and administration consistently have towards strong academic performance."

Certainly, any school would be proud of this achievement, but Elon should be particularly proud of showing that they can strike a key balance between work and play. Elon can showcase a women’s basketball team that has dominated on the hardwood, winning their conference and making NCAA tournament appearances in back-to-back years, and that has achieved in the classroom. And this statistic doesn’t even touch on individual academic awards.

Elon has not compromised its academic expectations for athletic excellence. Elon has been able to find a way to put student-athletes in a position to succeed in life and on the field, which is something that should be celebrated. In an age where schools have created fake classes to prop up student-athlete GPAs to keep them playing and collegiate players are forgoing a traditional four-year experience to peruse athletic domination, schools like Elon have been able to offer the best of both worlds to mid-level athletic talent and high-level academic talent, making sure to note the order in which “student-athlete” is written.

In 2014, Elon left the Southern Conference and moved into the Colonial Athletic Conference. This shift saw Elon’s athletics take on a more national spotlight. The CAA allows for exposure to most of the eastern seaboard, ranging from as far north as Boston and to as far south as Charleston. The CAA has allowed Elon to travel like a major program, and that has been something they can offer to recruits.

It may be daunting having to go far away from home, but Elon can now offer student-athletes the ability to compete against schools from up north, travel to familiar territory, and afford families the ability to not have to travel lengthy distances to watch their child compete. With Massachusetts, New Jersey, New York, Connecticut, Maryland and Pennsylvania making up a combined 51 percent of the student body, the CAA made it a lot easier to coax students out of the Northeast to come down south and play in Alamance County.

With some teams struggling to find their footing in the new conference and the always competitive nature of athletics dictating that you do what you must do to win, it was probably tempting to the school to attempt to recruit student-athletes who may not cut it in the classroom but would make up for it on the field.

While that strategy may have been enticing, all the evidence has shown that Elon has stuck to its guns and recruited student-athletes who can perform academically and athletically. And with Elon continually climbing its way up the ranks academically, the Phoenix still shows the value of academics.

Now the value of the student-athletes is starting to show. Football had a strong 8-4 season, advancing to their second ever playoff appearance; lacrosse earned an at-large bid to the NCAA Tournament in 2017; women’s basketball made back-to-back trips to the NCAA Tournament in 2016-17 and 2017-18 after winning the conference both seasons; and baseball had a bounce-back year, winning 36 games and seeing two players drafted in the 2018 MLB Draft.

Elon has begun to demonstrate at the individual and team level they can perform at a high level. And the student-athletes that they choose to recruit reflect the school's priorities. Elon student-athletes are demanded to mind the order in which that title is written: “student” before “athlete." And while some schools may find it a challenge to attract the right fit to find that balance, Elon has begun to prove that it can find students that thrive academically and athletically.