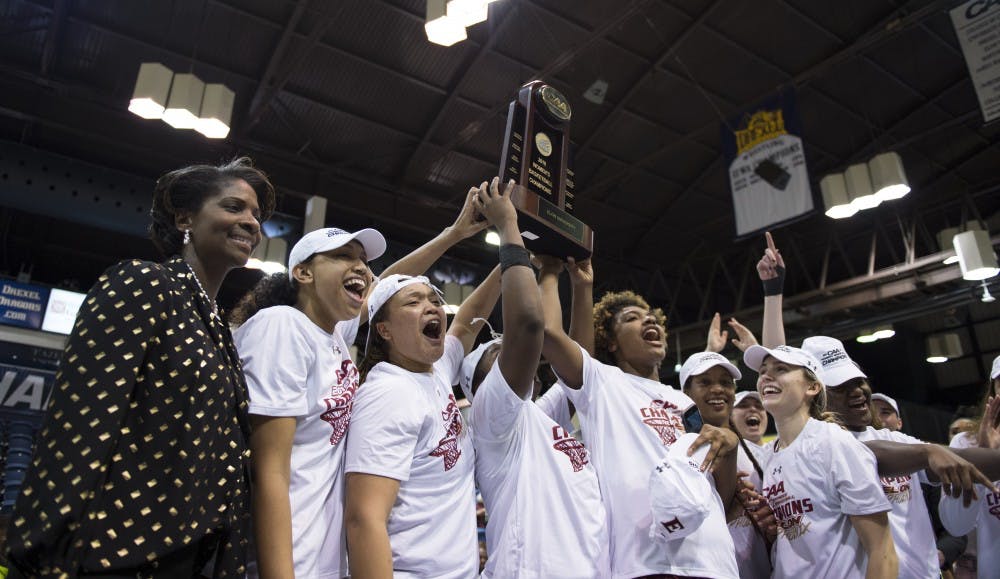 
Elon holds up the 2018 CAA Women’s Basketball Championship trophy as they celebrate their win against Drexel University March 10.

Kayla Liles is a five-foot, 10-inch guard from the McDonogh School. She is a two-time All-Metro and Interscholastic Athletic Association of Maryland “A” Conference Team honoree. The Owings Mills native had a strong senior year, leading her conference in points, rebounds, and steals per game, all while shooting a staggering .544. Her junior year of high school was just as, if not more, impressive when she recorded a double-double in over 80 percent of the games. She doesn’t let her athletics get in the way of her academics either, as Liles was named to her school’s honor roll for six-straight terms.

Eighth-year head coach Charlotte Smith called Liles a “very smooth, experienced wing player.” In a statement, adding that she believes Liles, “has the ability to be an elite defender in the CAA."

Another DMV-area guard will be joining Liles when Brie Perpignan steps on to campus this upcoming fall. The five-foot seven-inch Bishop O’Connell standout joined the 1,000 point club during her junior campaign. She was a member of the Washington Catholic Athletic Conference First-team as both a junior and a senior for the Knights. The McDonald’s All-American nominee also added All-Arlington and All-Arlington Gazette honors all four years of high school.

Coach Smith had lots to say about Perpignan’s demeanor on the court, saying she is “calm, cool and collected at the point guard position. She stays even keel as the director and coach on the floor. She's not rattled by pressure and she uses her offensive weapons to take advantage of her defender's mistakes.”

Micaela Ryan hails from Clarence Center, New York. The six-foot, one-inch guard played both basketball and volleyball all four years she was at the Buffalo Academy of the Sacred Heart. She is a two-time state champion, snatching the title in both her sophomore and senior years. She was a team captain, named a top-10 forward in the state, a first-team All-Catholic honoree, and a First Team All-Western New York honoree, among other accolades, as a senior. Ryan had 15 games with 20-or-more points, 82 threes, and eight double-doubles in her final year of high school. Ryan walked away from Buffalo Academy of the Sacred Heart with the second-most points ever with 1,526, and 230 three-pointers.

Coach Smith said in a statement that “Micaela can flat out shoot the ball.” Smith also said that Ryan uses her height well and, “has a knack for rebounding out of her area.”

Coach Smith said in a statement that Tasman’s time in Turkey, “has helped her develop a mind for the game.” Adding “Duru brings great energy and passion to the court, she's vocal on both ends and is the consummate teammate. Her strength and offensive skillset to the arc will make things tough for her defender."

Rounding out the recruiting class is Tyja Traore, a six-foot, three-inch forward from Atlanta, Georgia. Traore was a First-Team All-Region selection as a senior. She was also honored as Lakeside High School’s Team MVP her sophomore, junior, and senior years. Traore was named to the All-County Top 20 in her final campaign and led DeKalb County in blocked shots her sophomore, junior, and senior seasons. Traore also lead her club team, Peak Team Engram National to a title at the Basketball on the Bayou tournament.

“Tyja's length, timing and toughness will make her an instant impact on the defensive end. Offensively, she has nice touch around the rim, can knock down the midrange jumper and is not shy about mixing it up for offensive rebounds.” Coach Smith said in a statement about Traore.

These five will be joining a Phoenix squad that has won 52 games in the past two seasons and has made back-to-back NCAA Tournament appearances. While it may seem daunting to try and slot into a program that has had this recent success, Coach Smith feels that “this group will come in and contribute quickly alongside our returners.”

Elon is no stranger to youth either. This year’s squad will be put in a unique situation where they will have no seniors on the team. Junior guards Jada Graves and Lexi Mercer will be the eldest on the team as the only two juniors.