A look at the Love Graham Arts Festival 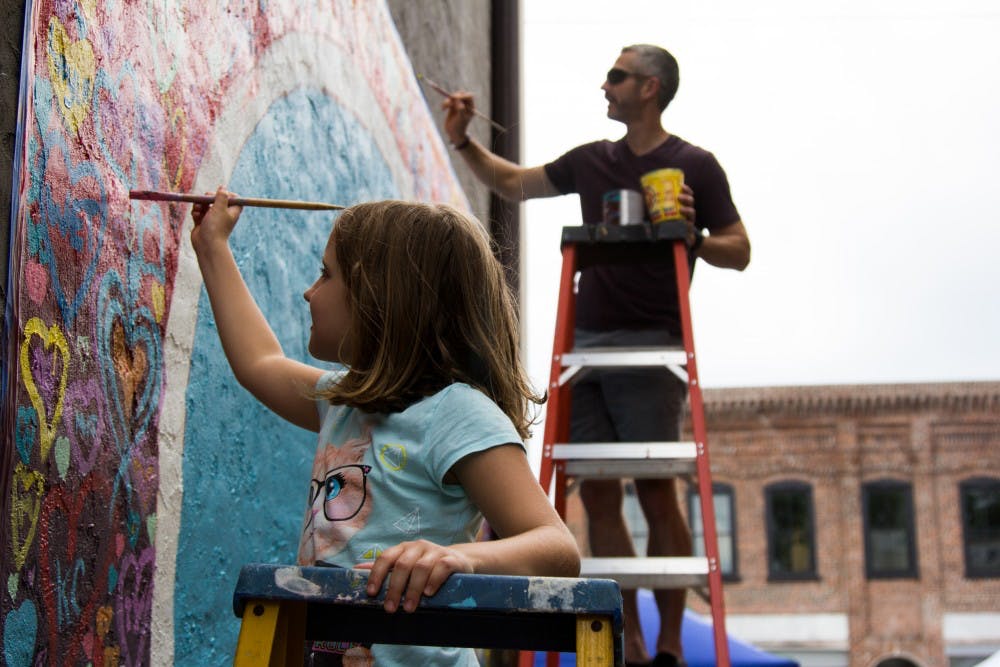 Peter Elder and his 7-year-old daughter Norah, simultaneously paint hearts onto the "Love, Graham Arts Festival" mural. This is meant to represent them giving their hearts to the Graham community, May 20.

GRAHAM — Dancers, painters and puppies filled the heart of the city of Graham during the first "Love Graham Arts Festival."

The event was planned and organized by the Co|Operative and the Independent Artist Movement. Together the two non-governmental organizations brought together 20 artists and six musicians from Alamance County to showcase their art from May 19 to May 20.

One of the main attractions of the festival was the creation of a mural being painted on the side of a building on North Main Street.

Festivalgoers had the chance to paint hearts onto the mural to represent giving their hearts to the community of Graham.

Pete Elder and his two kids, Norah and Crosby, helped the mural inch toward completion by each painting a heart on the mural.

Norah and Crosby's art teacher, Molly Feudale, was one of the artists who helped design the mural.

"The original concept of the mural was to make something that is positive and colorful and just shows the love we have for our community," Feudale said.

Seeing her own students participate in the festival was a special moment for the elementary school art teacher.

"I had quite a few of my students show up and it's so cool to see them being creative and making art in the community," Feudale said. "It is just amazing."

But Feudale's students weren't the only ones that painted a heart on the mural.

Elon University freshmen Juan Rios and Lily Sandifer-Stech passed by the festival on their way back to Durham after watching Elon's 128th Commencement Ceremony.

The first thing they did at the festival was add their own hearts to the mural.

"I really enjoyed being a part of the mural and painting my own heart because it will be there for such a long time, it might be there longer than me," Rios said. "I'd like to come back one day and visit the mural with my family and show them the heart I painted with my initials."

Immediately after adding the finishing touches to their hearts, Rios' and Sandifer-Stech's attentions were drawn to the music booming down the street.

On the sidewalk of North Main Street, the dancing crew "Endo Fx" were showcasing their skills to the community.

One of the dancers, Joshua Lanning, also known as "Link," had specific hopes for his dance crew at the festival.

"We want to invoke some positivity in Graham and in the community," Lanning said.

The dancing was Sandifer-Stech's favorite aspect of the festival.

"I've never really seen break dancing in person and that was something really new to me," Sandifer-Stech said. "To see those guys take the initiative to perform in front of everybody was pretty amazing."

But Lanning wanted his crew's dancing to do more than just invoke positivity and amaze onlookers.

"We also want to inspire that one kid who is overcome with being told which sport he should do," Lanning said. "I want to have that one kid know he doesn't have to follow the sports way and that he can excel in skateboarding, or art, or dance."

Lanning and the other members of Endo Fx had no luck convincing Rios and Sandifer-Stech to dance with them, but the second day of the festival wasn't the same when it came to crowd participation.

Three-year-old Marques Breton, a resident of Graham, may have come to the festival being pushed in a stroller by his mom, but after seeing what Lanning and the Endo Fx were doing, he didn't stay in his stroller for long.

Breton ran from his stroller to the dance floor and did his best to follow along. Watching the 3 year old dance was Lanning's favorite moment of the festival.

"When I saw him dance it really touched my soul as a dancer and as a human being," Lanning said. "Knowing in my mind and in my heart that I inspired a kid is the greatest feeling that I can get in dance."

After dancing with the members of Endo Fx, Breton is now more than confident about his dancing abilities.

After more than 20 minutes of dancing with Lanning and the Endo Fx, Breton got back in his stroller and was pushed toward the Smitty's Homemade Ice Cream stand for what his mom felt was a well-deserved treat.

Breton's dancing brought on several onlookers, and according to his mom, he "absolutely loved" the attention.

But Breton wasn't the only festivalgoer attracting a crowd.

Bentley, a miniature schnauzer, was the most famous dog at the festival, with more than ten thousand followers on his instagram page "bentley_badass."

Nicole Younger, one of Bentley's owners and a resident of Graham, was thrilled the arts festival was being hosted in the city.

For Younger, it was the perfect opportunity to add to Bentley's almost 700 photos on instagram.

"We love taking photos of Bentley at events and we also like having more things downtown because then there is more to do in the area so you don't need to travel as much," Younger said.

Going to the festival also allowed Younger to promote Bentley's Instagram page by participating in the festival's "chalk walk art."

Festivalgoers were encouraged to use provided chalk to create their own artwork on the streets of Graham.

It wasn't just the chalk walk art Bentley was able to participate in: as one of the most famous dogs in Graham, he was allowed to try on some of the Love Graham merchandise for his instagram.

While more than 300 of Bentley's followers liked the photo on Instagram, Younger chose not to buy the hat because it was too small for her husband's head and too big for Bentley's.

But even without Bentley's business, the Co|Operative was able to sell most of its merchandise to festivalgoers during both days of the festival.

Williamson works as the communications coordinator at the Co|Operative and played a key role in organizing the festival.

Although she was unable to attend the event because of an internship, Williamson was excited to hear about the event's success and is looking forward to seeing the logo she helped develop being worn around the city.

"I just took my love for telling the story of Graham and tried to wrap it up in a brand," Williamson said. "And I am so excited to see people wearing the Love Graham logo after the festival."

One of the attendees most eager to buy merchandise was Annette Maynard, a resident of Graham who spent almost $70 on Love Graham merchandise for her son named Graham.

"Oh, he is going to love this," Maynard said.

Chelsea Dickey, director of community development at the Co|Operative, helped plan the festival and was also in charge of selling merchandise.

According to Dickey, all of the funds raised by the merchandise would be going toward paying for event expenses. No extra income was made for the event planners or the Co|Operative.

But while merchandise sales went smoothly, not everything did. One of the main complications Dickey encountered during the actual festival was the weather.

Like Elon's commencement, the Love Graham Arts Festival suffered from the rain; because of the weather, half of the artists were unable to make it on the first day.

This is what Dickey attributed to the crowd turnout, which was less than originally expected.

"Everything at the festival went really well. The rain was just a bummer," Dickey said. "We had less people show up the first day because of the weather and we had sort of planned for the second day to be less attended."

Before the rain, Dickey had other main concerns when it came to the planning stages of the festival because of the controversy that came with its date.

Last year Alamance County Taking Back Alamance County (ACTBAC), a listed neo-Confederate hate group, hosted a rally on May 20, the 156th anniversary of North Carolina seceding from the Union at the onset of the Civil War.

The rally caused national controversy, and when the Co|Operative booked the festival for the same date, community members were worried it would cause backlash with ACTBAC.

But the self-proclaimed "Southern pride" organization moved their Confederate Memorial Day event to May 10. The day Jefferson Davis, the president of the Confederate States, was captured by the Union in 1865.

After Dickey received approval from the Graham City Council for the festival, she was able to work with members of the Graham Police Department to block the roads and assure all festivalgoers safety.

Drawing people together to have a good time is exactly what Dickey believes the festival accomplished.

According to Dickey, despite the weather and the controversy, the festival was such a success that plans are already being made for next year.

A second and even larger "Love Graham Arts Festival" is something many of the festivalgoers this year will be looking forward to for next summer.

"People are already talking about next year," Dickey said. "This year we planned it in five weeks, next year we will have a full 12 months to make it happen and hopefully we will make it a lot bigger."

Updated at 12:02 p.m. on May 22, 2018 to include more information about the amount of artists and musicians at the Love Graham Arts Festival.