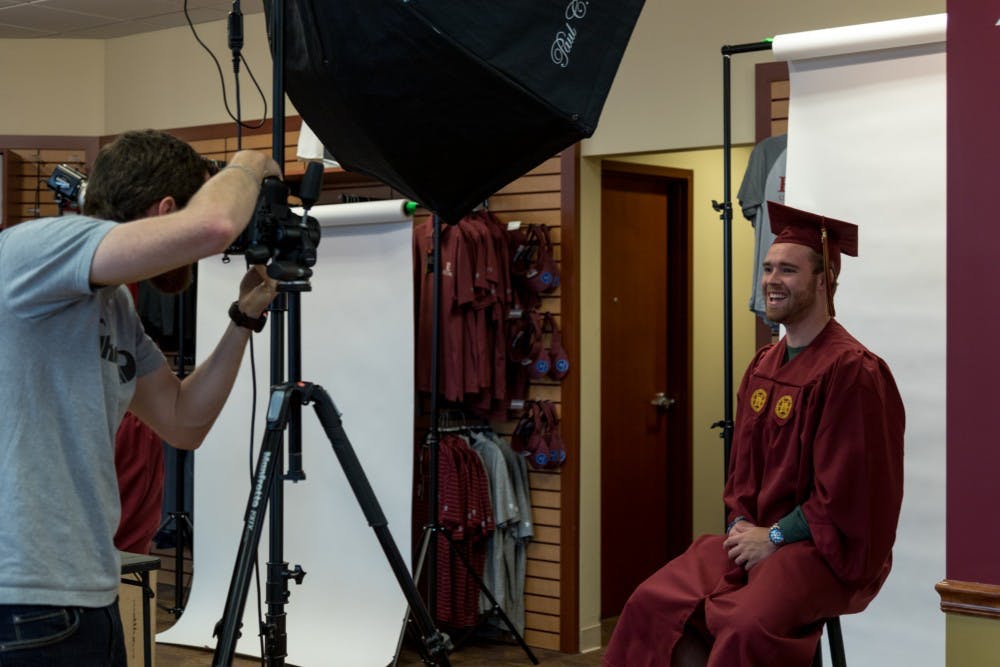 It’s no secret that Barnes & Noble College at Elon University sees an influx of students toward the end of the year not only to return rental books, but also to grab their caps and gowns in time
for graduation.

A lesser-known fact is that for the past seven years, Elon’s caps and gowns have been made entirely of recycled plastic bottles.

“Recycled plastic bottles are processed to remove impurities such as labels and caps. The bottles are then chopped into fragments called ‘flakes,’” Oak Hall’s website says. “Flakes are melted and then solidified into uniform pellets called ‘chips.’ Chips are melted again and extruded into continuous lament yarn.”

After that, the post-consumer plastic yarn is woven, dyed and fixed into
commencement-ready form.

The bookstore distributes the caps and gowns at no upfront cost to the student, thanks to
the university.

“Not everybody walks, so it changes year-to-year how much we actually hand out,” said Carly Mayer, the store manager of Barnes & Noble College at Elon.

But according to the 2018 Spring Registrar’s Report, approximately 2,000 undergraduates will be graduating on May 19.

In other words, upward of 50,000 plastic bottles were recycled to create enough caps and gowns for Elon’s graduating class this year.

But as it happens, these plastic caps and gowns can be further
recycled.

Mayer says recycling the caps and gowns is an option, but not many students have done so directly after graduation because of accessibility and the physical nature of having graduation under the oaks. She speculates that students might not remember the attire is recyclable after graduating.

“I think the thought is that it’s one more thing in the way during graduation,” Mayer said in regards to having recycling bins for the caps and gowns right after the ceremony. “It’s something I’m working on for when we graduate in Schar Center. Then there’s definite outlets whereas here, [under the oaks], everybody scatters. … That’s definitely something I’d like to do because otherwise, what do you need them for?”

In addition to Elon, approximately 350 schools around the country use GreenWeaver gowns, including neighboring schools Duke University and the University of North Carolina at Chapel Hill.

“Elon University went with GreenWeaver in 2011 and was one of the first in the country,” said Mike Merritt, the Oak Hall representative for this area.

And according to Oak Hall, more than 4 million students have worn the GreenWeaver attire for their graduations.

This just one of the ways in which Elon’s sustainability efforts persist. For more information about these efforts, visit the Office of Sustainability’s website.