The seven-year-old market, only 10 minutes from Elon, announced that its last day will be on May 27 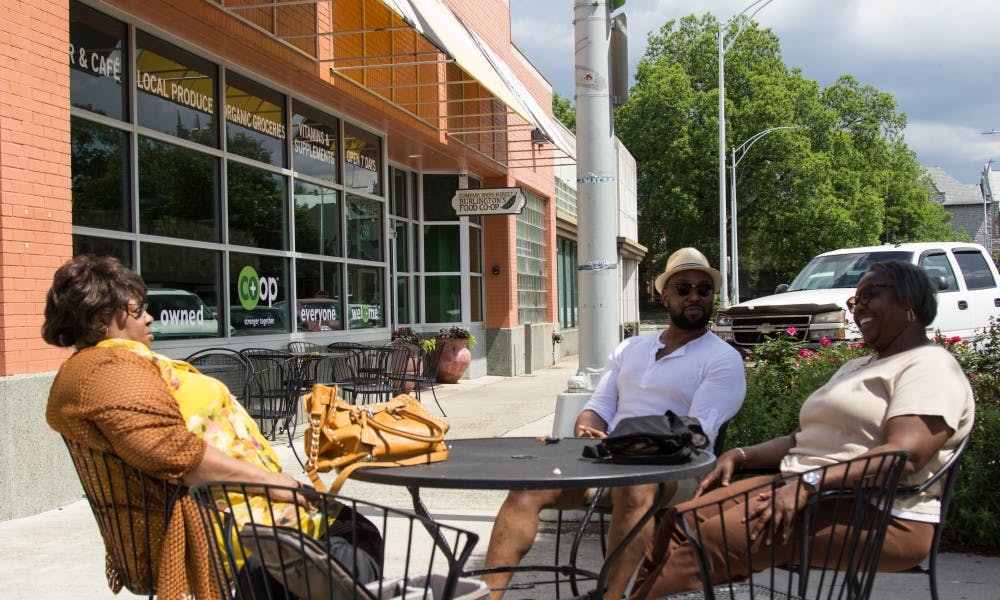 From left, Linda Shanks, Greg Sellars and Ralphine Noble sit outside of the Burlington Food Co-Op after walking through the store, which on May 27 will be officially closing, May 23.

BURLINGTON — After seven years in operation, the Company Shops Market: Burlington's Food Co-Op has announced this week that it will officially close on Sunday, May 27.

According to an official statement released on May 24, the Co-Op's closing is due to two main reasons, less people in Burlington and competing grocery stores.

"Though there are many new businesses in Downtown Burlington and plans for more in the future, the number of people working daily there is much lower than it was when we first opened our doors," said the official statement.

The increase and improvement of competing grocery stores was the second reason for the Co-Op to close.

"The owners of competing grocery stores have renovated their stores and some news stores have opened, as well. Nationwide, this trend towards chain stores with 'local' and 'organic' offerings severely hurt and closed many other grocery co-ops, just like ours," said the official statement. "Over time, low sales have left us with limited resources to stock our shelves, which in turn has led to even lower sales."

The closing comes as a blow to longtime patrons such as Elon senior Greta Anne Worden, who found herself going to the Co-Op weekly to buy kombucha tea.

"Whenever I went to the Co-Op it felt like there were more people who were into what I am into," Worden said. "I like the community, the food and honestly, everything there."

For Worden, the Co-Op was the perfect place to do her groceries.

"I really believe in eating organic and there is not a lot of that offered at other grocery stores, and when it is, it's not as local as the Co-Op," Worden said. "So, the fact the Co-Op is closing kind of shows the community doesn't seem to care that much about organic food and that makes me really sad."

According to the Co-Op's website, many of their products came from over 40 local and organic farms and suppliers.

But despite the Co-Op's organic focus, which was many patron's favorite aspect of the market, some weren't surprised when they heard about the closing.

"It's hard to make businesses like that last in downtown Burlington," said Greg Sellars, a Guilford county resident, who visits the market regularly. "I’ve been hearing rumors that it was going to close, so I'm really not that surprised."

Sellar’s attributes the market’s closing to the store's pricing.

“The Co-Op is very expensive, there is only a certain segment of the population that can come here," Sellars said. "A lot of people from nearby neighborhoods can’t afford to shop here. Honestly, it lasted longer than I thought it would.”

Linda Shanks, a resident from Graham was with Sellars on what she believes will be her last time at the market. But according to Shanks, the market's closing was caused by more than just high food prices.

“Right across the street from the Co-Op use to be a LabCorp office," Shanks said. "I’m sure a lot of them use to eat here and when they moved, I bet it was bad for business."

Shanks is referring to the moving of five LabCorp offices from downtown Burlington to Guildford Country. This relocation moved almost 1,000 workers out of Burlington.

“If you are going to have one company downtown and that one company moves, it’ll take all your business with it,” Shanks said.

Co-Op representatives at the market refused to comment on the store’s closing. Representatives pointed all questions towards the official closing statement, which is embedded below.

Updated at 2:41 p.m. on May 24, 2018 to include information from Burlington's Food Co-Op's official statement on the market's closing. As well as, to correct the misspelling of the word "company" in an earlier version of this article.