Brnovich's sophomore campaign off to a hot start 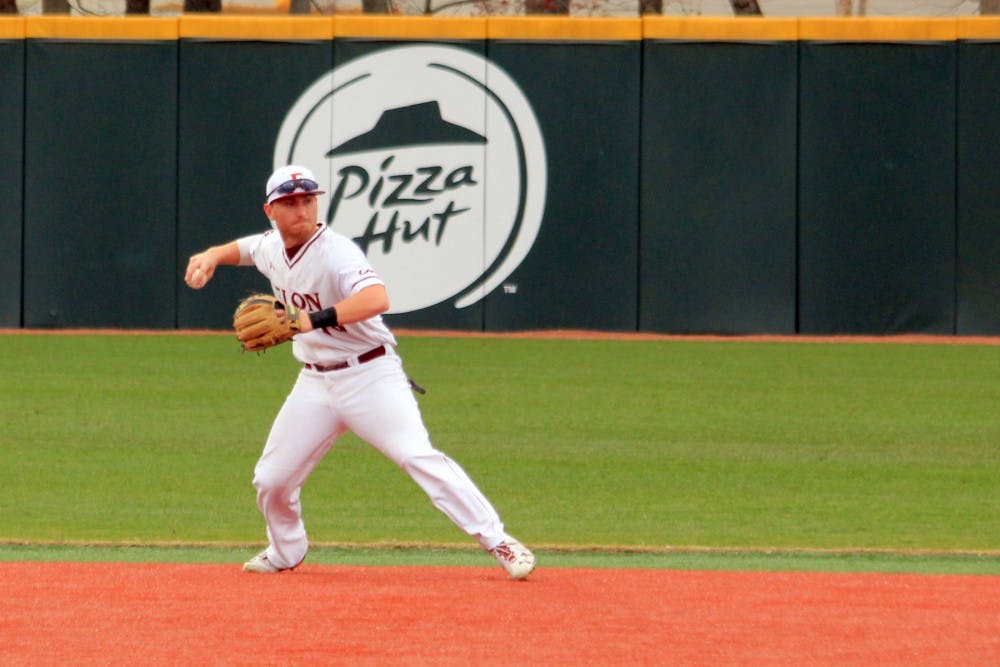 For sophomore right hander Kyle Brnovich, strikeouts are everything. He entered his seventh start of the season against the College of Charleston Cougars on Friday, March 30 with 61 Ks, good enough for fifth in Division I Baseball. Seven and a third innings later he had picked up another 14 fanned batters to bring his total to 75 on the season, propelling him into the number one spot one the Division I strikeout list.

“I was pitching with some attitude tonight.” Brnovich said, reflecting on his performance. “I was trying to send a message to Charleston, they are ranked now so I wanted to show that no matter who we play we are very capable of beating them.”

Though Kennedy calls it a curve ball, it is something unlike what almost any other pitcher throws, which makes it difficult for hitters to pick up while at the plate.

“I grew up calling it the knuckle change but the guys on the team have adopted the name ‘The Alien’ for it.” Brnovich said, of his unorthodox breaking ball.

As far as Brnovich is concerned, he is the first guy in quite a while to throw this pitch at a high level. “There’s one guy who has thrown it in the big leagues before me and that’s Burt Hooton back in the 70s.”

Hooton was a pitcher from 1970 to 1985 for the Cubs, Blue Jays, Dodgers, and Rangers in the big leagues.

“I throw it like a fastball and just let it do its work.” Brnovich said.

Brnovich has been key in the starting rotation for the Phoenix. He is undefeated on the season, with a 4-0 record and an earned run average of 1.53, the best amongst the team’s starters. His great start to his Sophomore campaign has already put him on track to eclipse most of his freshman year statistics.

“Maturing,” Brnovich said, when asked what he attributes this year’s success to. “I had a good amount of strikeouts last year but that was the beginning process; so now I feel more comfortable on the mount and more settled in, I’m not thinking about it as much.”

Brnovich does not shy away from big spots either, he is a competitor, he wants the ball in his hand. “He’s in the dugout tugging on my jacket telling me ‘I’m going back out there, you’re keeping me in,’” Kennedy said. “He hates when you even think of pulling him out. Guys like those are fun to coach, but you’ve got to be smart about what you’re doing and be realistic.”

As for the rest of Elon baseball, they came into a weekend series, beginning this past Friday, against Colonial Athletic Association rival the #30 College of Charleston Cougars with a 14-11 record. After taking two of three games in their opening series of conference play against the Dukes of James Madison University, and a statement win over in-state rivals and Southeastern Conference foe, the Demon Deacons of Wake Forest University, Elon looks to kick their season into high gear.

“I think we’re playing good baseball,” Kennedy said. “Our offense has done a really good job of extending starting pitching and making guys earn outs. We’re in a really good place offensively but all it takes is one guy out on that mound to put a halt to that so we just have to keep to the grind and keep plugging away.”