Senior leadership propels Elon into semifinals of the CAA Tournament 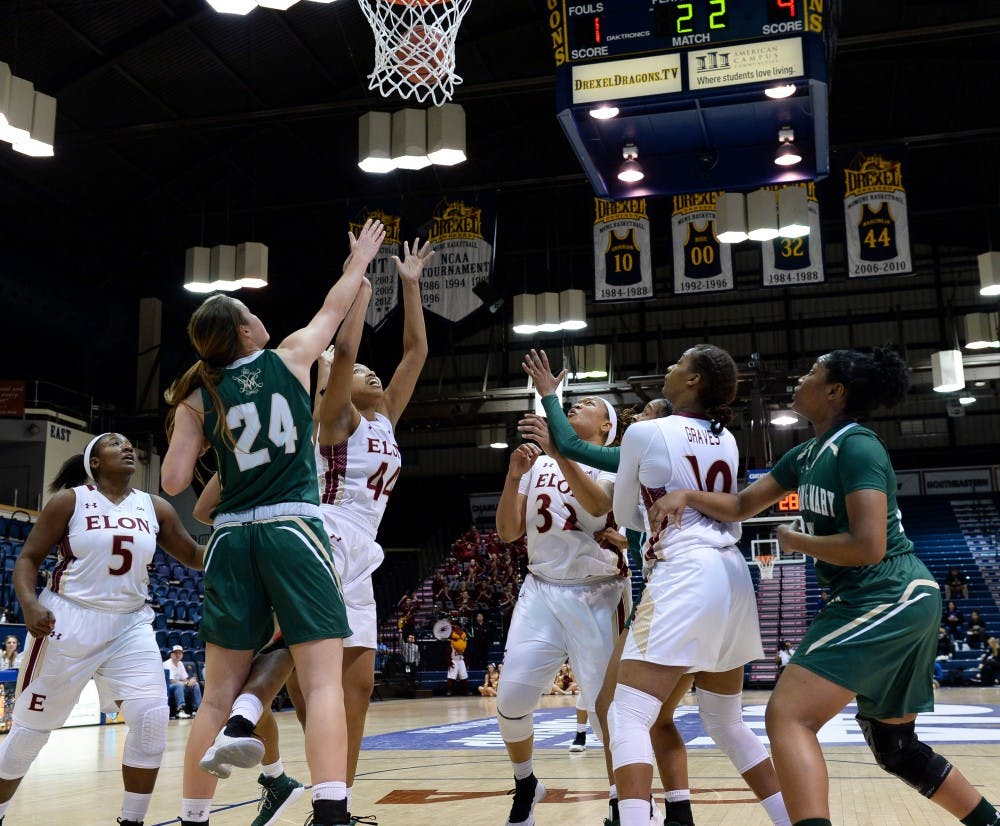 The Elon University women’s basketball team, ranked No. 3 in the tournament, made easy work of the College of William & Mary, defeating the No. 6 Tribe 67-50.

“We definitely are excited to have gotten the win,” head coach Charlotte Smith said. It was not a pretty win, but we’ll take it.”

Having to wait all day until the 7:30 p.m. start, jitters ran high on the court for the Phoenix squad, evident in it's first quarter performance. Elon shot 3-13 from the field, including 0-5 from behind the arc.

“It was a long wait,” Johnson said. “Did a little bit of homework, took a nap. For me, it was kind of just getting locked in. Then I realized I’ve done this so many times and I just felt like I had to be the leader like I’m supposed to be and they asked me to be.”

“It’s kind of hard just waiting, anticipating,” said senior forward Meme Garner. “I took a nap and I woke up and I was jittery. I was so nervous.”

Settling down in the second quarter, the Phoenix took an 11-point lead, which it would maintain into the half and through the third quarter.

“We just talked about the shots falling because we got some good looks, some really good looks,” Smith said. “I felt like we had a lot of nerves in the first quarter. Just shaking that off and focus on playing Elon basketball.”

“You’re not going to win many games shooting 26 percent from the floor,” said William & Mary head coach Ed Swanson. “I do think the people in the other locker room had something to do with it. I thought that Elon played a terrific game defensively. They’ve been good all year.”

A late-game run by the Tribe saw the lead shrink to nine at one point in the fourth quarter, but there wasn’t much the Tribe could do to calm the Phoenix offense.

“I thought we were a two-minute run away from making it really close,” Swanson said.

Up next, Elon heads to a semifinal matchup against James Madison University. A rematch of last year’s title game, the defending champion Phoenix looks to silence the Dukes once again. Smith said the quarterfinals game was helpful in achieving that.

“The key for us is to go out and play the way we’ve played the past couple of weeks,” she said. “I think with us having gotten one game under our belts that will eliminate a lot of the nerves that we had today. We have to do a better job of taking care of the basketball. I felt like we’ve had too many unforced errors.”

Besides Johnson, both Garner and senior guard Shay Burnett were one board short of completing their own double-doubles. Garner finished the night with 12 points and nine rebounds, whereas Burnett tacked on 10 and matched Garner’s nine rebounds. For the Tribe, senior center Abby Rendle finished her final game with her own double-double, posting 19 points and 10 boards.

Tip off against JMU is scheduled for 5:30 p.m. tomorrow, March 9 at the Daskalakis Athletic Center.

“We’ll come tomorrow and we’ll shoot the basketball during warm-ups to make sure that we’re confident,” Smith said. “Just excited to get the win and we’re excited to be able to move forward.”