Jessica Carew is now finishing her fourth year at Elon and has made a name for herself inside and outside the classroom. 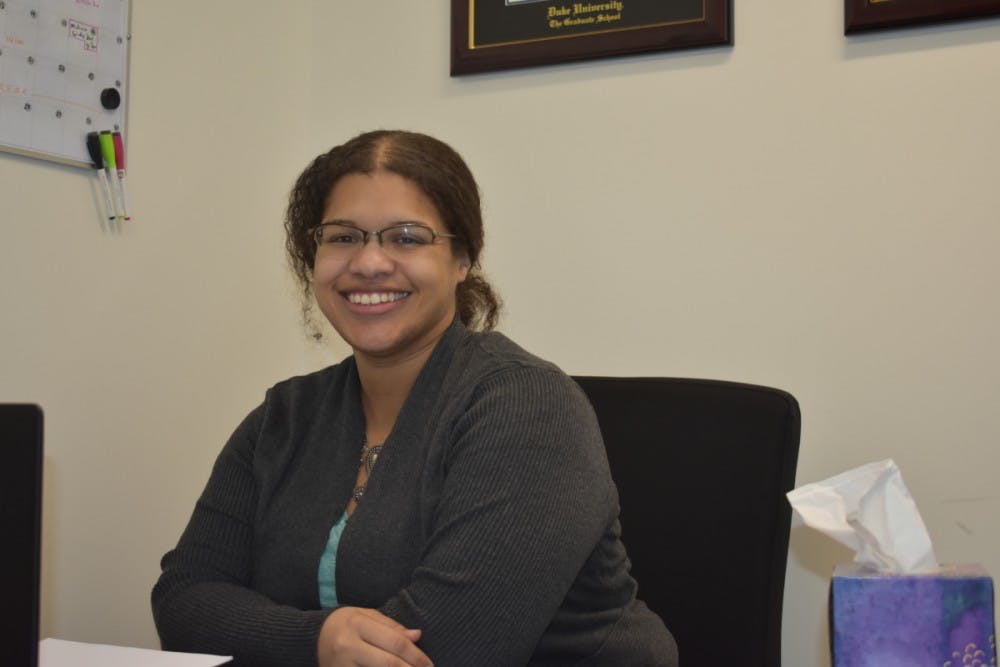 
Jessica Carew is now finishing her fourth year at Elon and has made a name for herself inside and outside the classroom.

It is difficult to identify people based on a single characteristic. For many, identity rests at an intersection between multiple factors such as race, gender, age and location. As a black girl growing up in the rural outskirts of Richmond, Virginia, during the 1980s, Jessica Carew was constantly aware of aspects of her identity such as race and gender.

Today Carew is an assistant professor of political science at Elon University. Her experience juggling multiple aspects of her identity while growing up was a motivating factor in her choice to study the influence of intersectional identity on perceptions of political candidates.

From an early age, Carew learned that people were more likely to perceive her differently based on her race and gender. As such, Carew constantly worked to avoid being stereotyped based on aspects of her identity.

On the straight and narrow

Growing up in the shadow of the former capital of the Confederacy in a rural area of Henrico County, Carew encountered aspects of race relations that forced her to behave in a certain way.

In a region where Confederate flags and symbols were a common sighting, people were less likely to be open-minded regarding matters of race. Aware of this, Carew’s parents made sure that she realized how society may view her.

“On the race side, there were a variety of things that we were told growing up, one having to do with this idea that we couldn’t do everything that we always saw our friends doing, partially because we would be seen in a different way,” Carew said. “So things that seem rambunctious for some kids are written as very bad for other kids.”

The same rules applied for gender. Carew learned the importance of behaving as a collected and respectful young lady. This impacted the way in which Carew spoke and conducted herself.

Carew’s older sister, Nichelle Billips, explained the different expectations and behaviors associated with members of her race and gender.

“At my church growing up, they had sessions about what to do if you encounter the police,” Billips said. “And that was in part due to the fact that our church was majority black and there might be different ways that you need to behave yourself that perhaps other people didn’t need to do. The same goes for being a woman. That was just another layer on.”

Although it could not be helped that people perceived Carew in a certain way based on gender and race, Carew was taught to do her best to exemplify behavior that contradicted negative stereotypes associated with these identity dimensions. Carew learned to recognize how society viewed her and to avoid using that lens for the rest of society.

“It was very clear that we had to be on the straight and narrow on both of these sides,” Carew said. “Another thing that we were always told was that race didn’t matter. It didn’t matter what race someone was. What mattered was the character of the person – what they do, how they behave, how they act, and that’s how we should see things. However, we also had to be aware of society was thinking and that we needed to work twice as hard to get half as far.”

Despite working from a disadvantaged position, Carew was taught by her parents that excuses related to gender and race were unacceptable. Carew learned the importance of hard work and education from a young age.

Despite living in the western part of Henrico County, Carew attended elementary school in a more affluent area on the eastern side of the county. With more resources in the schools, there was more opportunity for advancement within gifted programs. This early foundation set Carew up to handle advanced classes in middle school and be accepted to the Maggie L. Walker Governor’s School for Government and International Studies for high school.

Carew cites her older sister as an academic role model, explaining that Billips inspired her to excel in her classes.

“My parents very much were about education and hard work and all of those things,” Billips said. “None of those things should be an excuse for you not achieving or not doing as well as you could possibly do just because of what someone else was doing.”

While in school, Carew noticed disparities of race and socioeconomic status surrounding her. According to Carew, she was usually the only black student in her advanced classes. Additionally, out of approximately 20 students that attended the Maggie L. Walker Governor’s School for Government and International Studies, only four came from the less affluent side of Henrico County where Carew lived.

Recognizing that certain students were not being tracked into advanced classes laid the foundation for the insight that some institutions are built to have different outcomes for different people.

Along with being exposed to matters of race and gender perceptions while growing up, Carew’s experience at her high school sparked an interest in the inner workings of politics.

Although she was passionate about politics, Carew did not realize her desire to become a professor until she joined the Ralph Bunche Summer Institute as a rising senior at Yale University in 2003. Hosted at Duke University, the summer program is designed to encourage rising college seniors from groups underrepresented within political science to obtain a Ph.D. in the discipline.

Around the same time that Carew was considering joining the summer program, students were engaged in various forms of protest on Yale’s campus regarding race-related incidents. Students questioned the administration as to why there were not more faculty of color who could push administrative change.

Coupled with a desire to see more professors who looked like her, Carew realized her ambition to become a producer of knowledge rather than merely a consumer. The Ralph Bunche Summer Institute was the natural first step in beginning such a process.

“It was that there were questions I had about how things work that I wanted to then be able to explore, and those questions were often not necessarily being asked and explored,” Carew said. “So I was able to find a program that actually did support the asking of those questions and then try to work through it.”

Carew began attending Duke’s graduate program in political science in 2005 and started working for the Ralph Bunche Summer Institute the following summer as a teaching assistant. Along with advising students on research projects, Carew currently gives guest lectures on elections, participation and concepts of race and identity at the institute.

Carew obtained her Ph.D. in political science from Duke University. Outside of teaching American politics, Carew conducts research regarding the influence of intersectional identity on the perception of political candidates.

Motivated in part by childhood experiences concerning race and gender, Carew began researching perceptions of intersectionality about 10 years ago. Carew recognized a hole in the literature surrounding this topic and a need to examine identity as something more than one identity dimension at a time.

Assistant professor of political science, Carrie Eaves, who is a colleague and close friend of Carew's, explained the importance of Carew’s research.

“I think it’s critical,” Eaves said. “I think we’ve seen an increasing interest in race and ethnicity and this identity politics and I think her research is critical to that field. I’m glad we have it to sort of flesh out our department.”

Billips added that the discussion surrounding Carew’s research is a timely one.

“I think it’s fair to say it’s a pretty hot topic now,” Billips said. “I think that in some ways the fact that it’s a hot topic more broadly is news to people who don’t experience intersectionality. I think that it’s important to have the recognition and maybe the acknowledgement that there are multiple forces at play in the world around us, some of which we may have not been aware of.”

Carew is married with two children and is currently wrapping up her fourth year at Elon. Moving forward, Carew wishes to examine Latinas in politics and how they are perceived as compared to African-American women.

“We all sit somewhere on all of these different dimensions of identity,” Carew said. “When we put them all together, what does that look like in terms of what those stereotypes are?”