Elon women’s basketball falls in first round of NCAA tournament 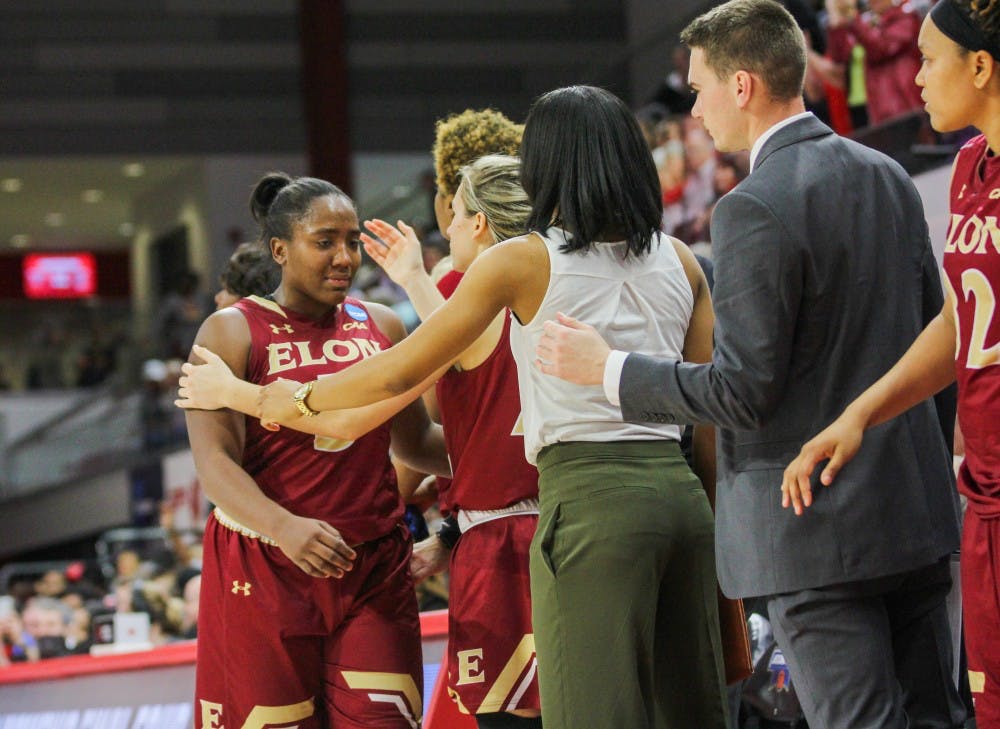 It was an ugly day of shooting for both teams. Elon, who was riding a 13-game winning streak, finished the game with 12 total field goals, shooting a tick over 23 percent. The Wolfpack shot better than their season average, connecting on 22-52 shots from the field, good enough for 42 percent and a 27 point margin of victory.

Head coach Charlotte Smith, having just completed her seventh season, praised the fight and determination of her team.

“I’m just really disappointed we had to go out this way because we did not play our best basketball today,” she said. “We got into foul trouble early in the game and that took us out of our rhythm and our momentum offensively.”

Senior guard Shay Burnett made sure she went out with a bang for the Phoenix. She was a rare bright spot in the offense, scoring 12 points and adding four assists.  She set a season-high with 3 three-pointers and was the only Elon player with more than five points.

Burnett was visibly emotional after the game.

“My team at Elon, or [Johnson and my] time at Elon, has been very special,” she said before breaking down into tears.

It was a poor time for Elon to have its worst game of the year. Elon was held to less than half of their average points per game this year. This is also the fewest amount of field goals they have hit all season and the first time Elon has been held to five or fewer points in a quarter since the second quarter against the University of Wisconsin at Green Bay  in November 2017.

“I feel like we just didn’t have the energy that we had in the conference tournament,” Smith said. “We were a little flat from start to finish and so we didn’t shoot the ball well. Then we didn’t get those second-chance opportunities either and that was just from a lack of crashing the boards.”

Elon was the Colonial Athletic Association (CAA) champion, held a 13-game winning streak into the tournament and reached the field of 64 for just the second time in program. While the Phoenix certainly has a lot to hang its collective hat on, they were looking for more out of this season.

“We talked about not being content with what we did in our conference and, you know, not just coming into the tournament and being participants, but looking to advance and we fell short of that today,” Johnson said.

Elon has a bright future ahead of them. Though they will graduate three seniors this year in guard Shay Burnett, forward Meme Garner and center Malaya Johnson, Elon has the sixth youngest roster in the country, including six freshmen and three sophomores.