Elon men bow out in first round of CAA Tournament 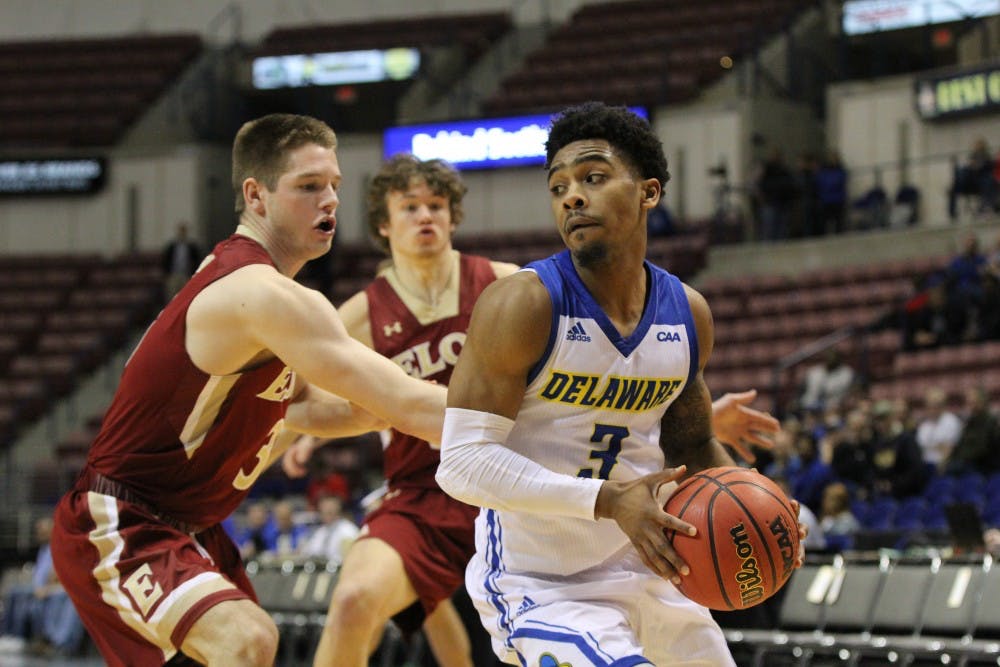 NORTH CHARLESTON, S.C. – The Elon University men’s basketball team’s season concluded Saturday night, March 3, when the Phoenix fell to the University of Delaware 86-79 in the first round of the Colonial Athletic Association (CAA) Tournament.

The No. 10-ranked Elon team was unable to stop a hot-handed No. 7 Blue Hen team who finished the game shooting just over 57 percent from the field. Sophomore guard Ryan Daly and junior forward Eric Carter finished with 23 and 20 points, respectively.

Elon started the game strong, jumping out to a 10-2 lead with four different Elon players finding the bottom of the net. But Delaware took the lead at the 10:44 mark of the first half and never looked back.

Senior guard Dmitri Thompson didn’t go down without a fight in his final game in the maroon and gold. He finished the night with a career-high 27 points, adding eight rebounds and three assists.

“I left it all out on the court, but it’s supposed to be like that every game,” Thompson said. “I try to go out there every game and play as hard as I can, and it just so happens that this is the last one I’ll play in an Elon jersey.”

Thompson was a man on a mission in the second half, dropping 12 points in the first five minutes of play. It was a march to the free throw line for the last three minutes and change where Delaware was able to hit enough shots from the charity stripe to secure a win, ending Elon’s postseason after just one game.

“A variety of things happened — our biggest issue throughout the game was our inability to get stops regardless of the defense we played,” head coach Matt Matheny said. “We couldn’t get two or three stops in a row to start a run. I thought our players were very good with their execution to start the second half. We made a run offensively, but we didn’t get enough stops and for them to shoot 57 percent is a glaring number.”

This final loss seems to be a fitting end to the Elon season. After beginning conference play  4-2, Elon fell out of rhythm. The Phoenix dropped its final 11 of 13 games, including the last seven straight.

“Down the stretch we have lost some confidence, and [our players] really try to get confidence back and it’s so hard to do once it’s gone,” Matheny said.

This is the third straight year in which the Phoenix has lost its first game of the conference tournament.  With the loss, Elon loses a senior class of forwards Brian Dawkins, Jack Anton and Jack George and guards Dmitri Thompson and Collin Luther.

“I’ll remember our seniors and everything they have done for us, this year and all the years I have been here at Elon,” junior forward Tyler Seibring said. “I’m going to appreciate the people who have been around us all season. Whether it’s winning or losing it’s the people that are around you.”

When looking ahead to next season, Seibring is focused on learning from this season.