Struggles down the stretch lead to short-lived postseason 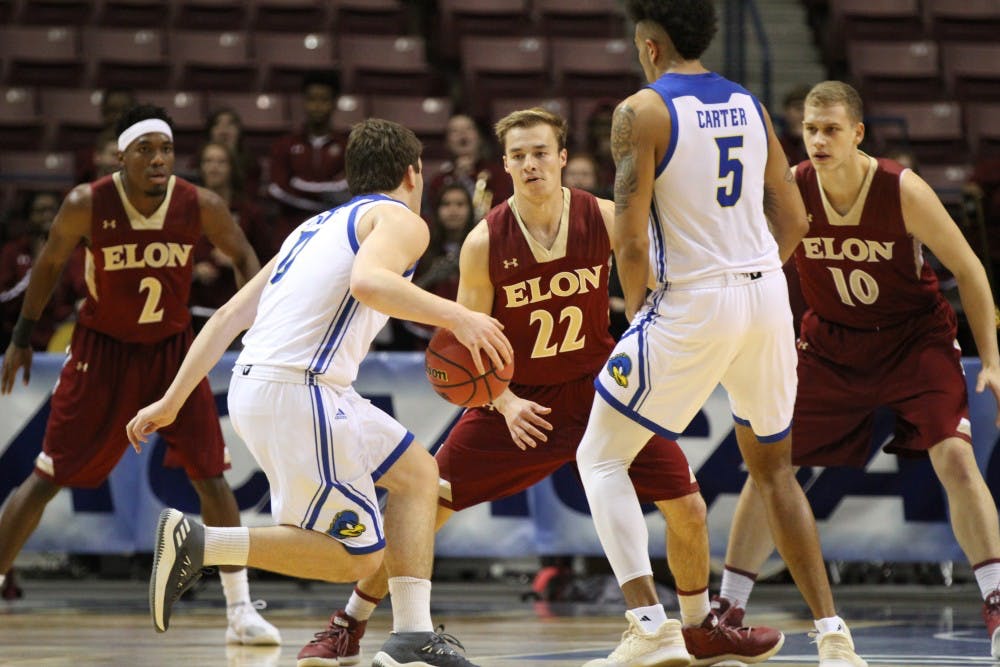 Elon University men’s basketball had an up and – mostly – down year. After being picked to finish third in the Colonial Athletic Conference (CAA), the team went out in quiet fashion, losing in the first round of the CAA tournament in North Charleston, South Carolina.

Before the season, Matheny was quick to set the expectations for his team.

“We have the potential with this team to be as good of a team as we’ve had in a long time,” he said in November. “I believe that. Now, we’re not there yet, but we have a chance. We have potential … because of the talent we have and the experience that we have.”

The season opened 40 miles east of campus to play Duke University, a team coming off a national championship appearance, at famed Cameron Indoor. Though the Phoenix lost the game 97-68, it was good exposure for the team to play a traditional powerhouse on the road and post a respectable score.

Elon got its first win of the season when it beat William Peace University in the final home opener for Alumni Gym. That game saw four Elon players in double digits for scoring, led by senior forward Brian Dawkins who had a double-double with 10 points and 10 rebounds.

The Phoenix then went to Milwaukee for the Black and Gold Shootout Tournament. Elon put on a strong showing in the Midwest, but it fell short in the finale to the host team, the University of Wisconsin at Milwaukee. The Panthers in that game overcame a 19-point deficit and beat Elon with a last second jumper.

Elon rebounded and rattled off five wins in the next seven games to boost their record to 8-5 before beginning conference play. This run encompassed a homestand sweep of Radford University, the University of South Florida and St. Peter’s University.

Elon showed why it was so highly regarded in the preseason rankings at the beginning of conference play. It started 4-2 in CAA action, with key wins over Hofstra University and top-ranked College of Charleston.

But, the team hit a snag when it went to Harrisonburg to visit the Dukes of James Madison University. After leading by 10 points with 1:10 remaining in the game, JMU was able to force overtime after an Elon collapse, going on to win the game 85-74.

That loss seemed to take a toll on the confidence of the team. Elon would win just two games from there on in, seeing its last victory come exactly one month before the season came to a close, when the Phoenix beat the University of Delaware, the team that would end the 2017-2018 campaign for them, at home 89-76.

Things took an even worse turn for the team when they lost redshirt senior forward Brian Dawkins to a hand injury in the week leading up to their second meeting of the season with the Hofstra Pride. Dawkins was out for games against Hofstra, University of North Carolina at Wilmington, Delaware and College of Charleston, all of which Elon lost. Dawkins was able to make a return just in time for senior night against Northeastern University, but his presence back on the court did little to stop the Huskies from spoiling the night, throttling the Phoenix 81-59.

Elon had a chance to close out Alumni Gym in style, looking to get back on track and win going into the postseason against JMU once again, but were unable to send off the historic court in winning fashion, losing 90-84.

Injury played a factor once again in that game, as Swoope came out with a blackened left-eye. He apparently suffered the injury at the bottom of a scrum against Northeastern. Though Swoope was a game-time decision, and he practiced in shootaround by covering his injured eye to test out playing with only half of his vision, he was in the starting lineup. He contributed just seven points on 3-of-10 shooting and added four assists.

Swoope struggled in the second half of the season. The player that once was the leading scorer on the team saw his production dwindle down the stretch. In the six games lost consecutively to end the regular season for the Phoenix, Swoope shot a measly 24 percent (13-54) from the field.

This put a lot of pressure on other players, such as junior forward Tyler Seibring, and senior guard Dmitri Thompson to step up. And while both of them certainly did, without the support of Swoope it was tough for the team to get over the hump.

After the losing streak, the team entered the conference tournament in the last place as the No. 10 seed, and needed to play in a play-in game, where they met with the University of Delaware Blue Hens for the third time, to advance to Sunday’s quarterfinals.

Elon battled back and forth all game, but in the end fell short to see their season end with a record of 14-18 overall, and 6-12 in CAA play. Swoope had another tough game for Elon, going 1-11 from the field, including 0-7 from behind the arc.

Thompson left it all on the court in his final game for the Maroon and Gold, dropping 27 points, while adding eight rebounds and three assists.

“I left it all out on the court, but it’s supposed to be like that every game,” Thompson said. “I try to go out there every game and play as hard as I can, and it just so happens that this is the last one I’ll play in an Elon jersey.”

With Elon graduating stars such as Thompson and Dawkins, it will now be up to rising seniors guard Steven Santa Ana, forward Tyler Seibring, and guard Dainan Swoope to lead the team back to where they were projected to finish this year.