Solid pitching gets Elon baseball its first win of the season

Welhaf has career-high 12 strikeouts in victory 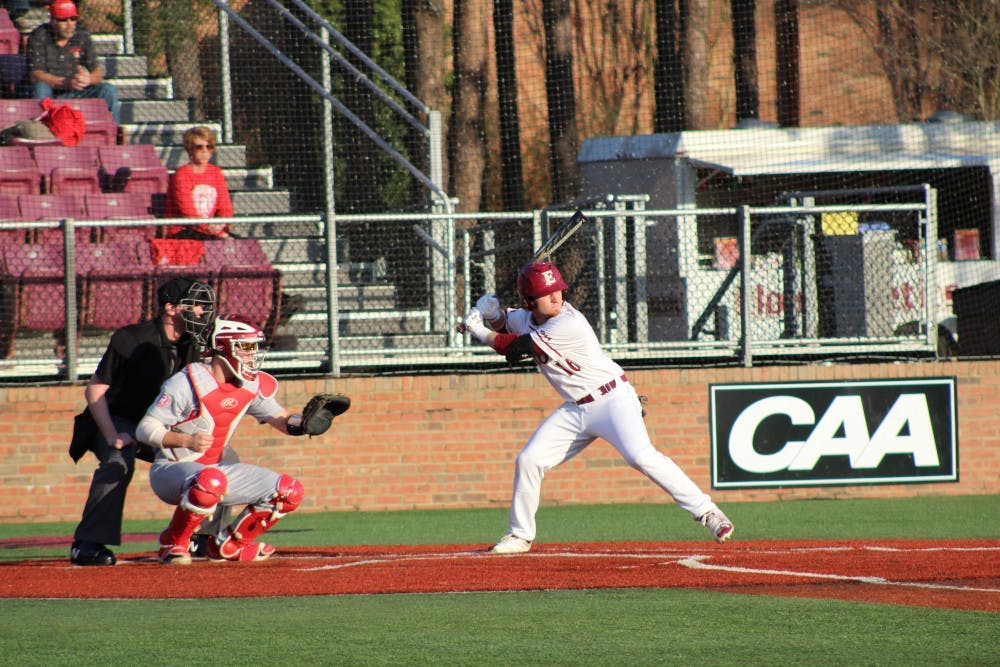 The Elon University baseball team (1-3) got into the win column for the first time in the young season, beating Radford University 2-1 Tuesday afternoon at Latham Park.

Sophomore right-hander Mason Daniels took to the bump for the first time this season for the Phoenix. In his first game action since 2016, missing last season following Tommy John surgery, he completed 3.0 innings of work.

“Mason’s a great guy,” said senior catcher Hayden Platt, reflecting on seeing his teammate pitch for the first time in a game. “He’s just one of those guys that you want to see do well. For him to go out there and pitch lights out – it was great to see; we’re all so happy for him.”

Radford University scratched across the first run of the game in the top of the third when sophomore shortstop Colby Higgerson drove a ball back up the middle, scoring junior second-baseman Kyle Butler from second.

Elon struck back right away in the bottom half of the third. A throwing error at first base pushed senior outfielder Zach Evers across home to tie the game.

Phoenix head coach Mike Kennedy wanted to limit Daniels in his first start back and pulled him early. Daniels finished giving up six hits and one earned run, adding a strikeout in his limited time on the mound.

Kennedy turned to senior Robbie Welhaf in relief. Welhaf picked up where Daniels left off, needing just 10 pitches to strike out the side in the fourth. This was a stark contrast to his last outing against Penn State University where he lasted just two-thirds of an inning and gave up seven runs.

“First game of the year everyone has some jitters, but I think our team is on the right track now," Welhaf said. "Sometimes you need to take a weekend and flush it. We’re pretty confident in our staff so I think if we stay on track we’ll be good.”

Welhaf pitched six, strong innings, capturing a career-high 12 strikeouts. The only blemishes on his closing line were one hit batsman, one hit and one walk. He needed just 74 pitches to work through 20 Highlanders.

“It was good to see him bounce back like this,” Kennedy said. “Robbie is a guy we depend on quite a bit. We had a ton of confidence sticking him out there in a 1-1 game and it’s a good thing for us that he brought his ‘A’ game and had a great outing.”

Elon scored what would be the deciding run in the bottom of the sixth when sophomore pinch hitter Joe Satterfield singled up the middle to score Platt from third. Elon was able to hold on defensively, keeping Radford at bay and not surrendering any more runs the rest of the way in.

“We might not show it but we are definitely one of the most confident teams in our ability to play ball," Welhaf said. "We know we can hit and we know we can pitch. Now, we just need to string it together."

Elon now looks to continue its winning ways when they host Kansas State at 4 p.m. tomorrow, Feb. 21, at Latham Park.

After the announcement that Elon University students would be moving online after spring break, an Elon student decided to turn that disappointment into an opportunity to support Allied Churches of Alamance County.