Leo Lambert was joined by students, faculty and staff for his final College Coffee as president 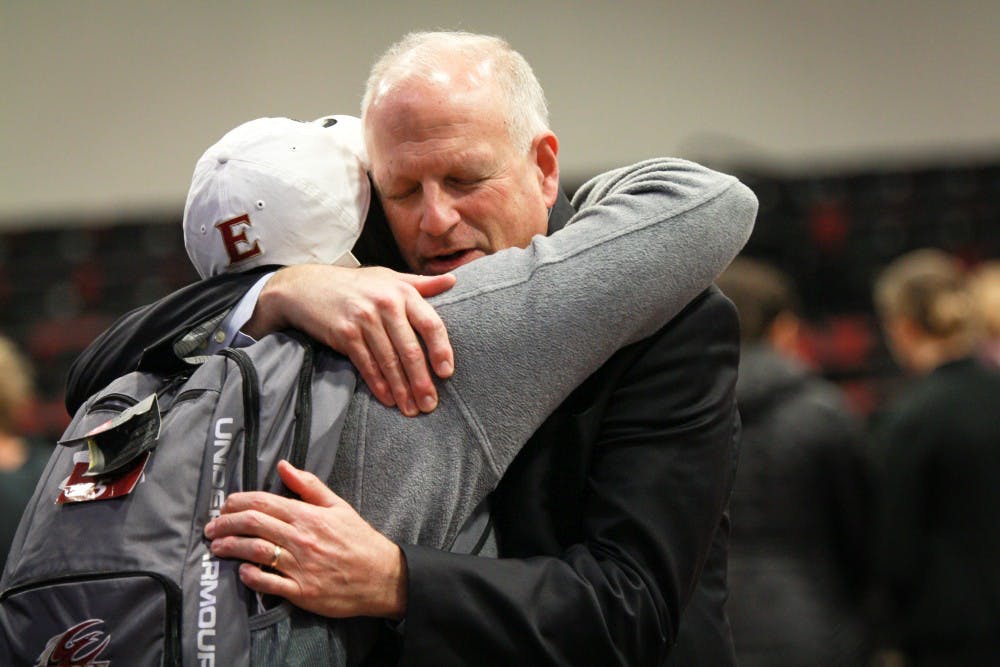 After announcing last February that he would be stepping down, President Leo Lambert is just two days away from officially beginning his yearlong sabbatical. In his honor, a special College Coffee was held this morning in Alumni Gym, where students, faculty and staff gathered to hear from Lambert one last time while in his presidential role. With maroon and gold donuts in hand, cheers filled the gym as Lambert reflected on his time at Elon and spoke about his plans for the future.

“I’m truly looking forward to writing a book with my dear friend and colleague Peter Felten and then a year from now, we look forward to returning and being a part of this community for many years to come," Lambert said.

Senior Alonzo Cee was standing in the large crowd of people as Lambert spoke. He said he was hoping to see him serve as president for his entire Elon experience, but is also excited for what is to come under incoming president Connie Ledoux Book, who begins her term this Thursday, March 1.

“He was an absolutely phenomenal president, but I’m also confident in Dr. Book’s leadership. I got to meet her in the fall, and I'm confident in the board of trustees to pick her out and seek her out. I’m definitely going to enjoy seeing this transition, but also a little bit sad to see Dr. Lambert leave,” Cee said.

Cee also spoke of the legacy Lambert will be leaving on Elon’s campus. He said while he is sad to see him go, he recognized Lambert has left a positive mark on the university.

“I am really happy for him, he has had an amazing time here... I feel like he is leaving on a high note, and he knows everyone loves what he has done here.”

The cheers throughout the gym grew even louder when the announcement of the new ‘Lambert Academic Village’ was made, currently known as ‘The Academic Village’. Lambert said he learned about this recognition just a few days ago at a Board of Trustees meeting. He said the village has always been a special place in his heart throughout his time as president.

“I had no clue, I was dumbfounded... I am sitting there listening to this, and I’m thinking everything that the academic village represents, all the stuff I have cared about through my presidency,“ Lambert said.

When Lambert returns to campus, he plans on assisting Book in any way he can, but also wants to “step back and watch it unfold.” He says the future of Book’s presidency is entirely in her control.

“I have no idea, but I bet it's going to be exciting and different and fresh and visionary.”

When he returns to Elon, Lambert still has plenty of aspirations and ideas to improve higher education at the university.

“President Book and I have talked about ways that when I come back a year from now. I might be able to assist her with alumni work or fundraising, and I’ll be willing to step up and do anything she asks me to do.”

As for the coming days, Lambert plans on unplugging from electronics and enjoying time with his wife, Laurie, and family.

President Lambert plans on returning to campus after his year-long sabbatical as president emeritus and professor.