Take me out to the ball game: preview of the 2018 Elon baseball team 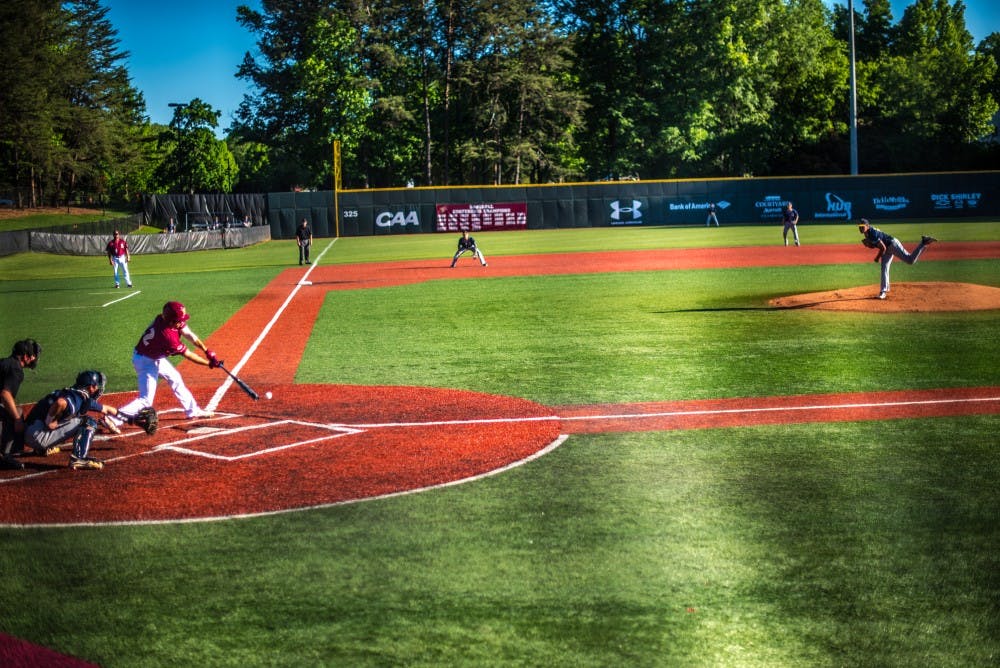 After finishing last season with a 24-32 (12-12 in conference) record, the Elon University baseball team looks to make some desperate changes to their process to prevent capturing the fourth consecutive losing season under the leadership of head coach Mike Kennedy.

Kennedy, who graduated from Elon in 1991, enters his 22nd season as the head coach at his alma mater. With a career record of 678-524-3 (.564), Kennedy has won the most games in program history as head coach, but he will have to make some changes to halt the skid.

The most obvious changes undergone by the team are those to the roster. The seniors who graduated last year and the freshmen who played for their first time in the maroon and gold this past weekend. The Phoenix graduated nine players, including outfielder Kyle Jackson and pitcher Jordan Barrett.

“We lost Jackson at the plate who drove some runs in for us and Jordan Barrett on the bump had a good year for us last year,” Kennedy said. “Those are some areas that you’re trying to make up and fix a little bit.”

Jackson led the team in home runs and runs batted in, and placed second among the Phoenix players in hits, runs scored and slugging percentage. Barrett ranked second on the team in earned run average (ERA), batters struck out and games started.

Kennedy was quick to call out the players he believes will fill the gaps left by the graduating faces.

“We’re hoping that players step up and can be a run producers like Jackson was. Maybe [Hayden] Platt has a more consistent year and a full year when last year he really got going late in the year. He had a couple good at bats [Friday] and that helps us in the middle of the order.”

Pitching will lead the Elon defense this season. Impressive performances from the starters kept the Phoenix within striking distance of Penn State University during the series this weekend.

“[George] Kirby’s the dude – he’s got good stuff. We’re expecting those kind of outings from him,” said Kennedy after the sophomore pitcher struck out 11 of the 20 batters he faced during the 2-1 loss against Penn State on Feb. 16. “That doesn’t surprise me that he did what he did tonight. If [Brandon] Justice throws like that, he’ll be a huge help for us. He threw extremely well … but he ain’t been that good. That’s good to get him going, confidence wise, and give us another option down in the bullpen.”

When it comes to hitting in that strike zone, the Elon offense struggles to keep up in its opening weekend of play. That came as a frustration to players like sophomore catcher Ty Adcock.

After the Phoenix capped off its third-straight losing season, Elon enters this year selected to finish in a tie for fifth place in the Colonial Athletic Association (CAA). The team is tied with the College of William & Mary, just behind Northeastern University and the College of Charleston. Though conference play for the Phoenix will not begin until March 23, a couple of players on the Elon team received recognition from the league.

Junior shortstop Ryne Ogren and sophomore starting pitcher Kyle Brnovich were both named to the Preseason All-CAA Baseball team after impressive seasons last year. Ogren was named the team captain and team MVP of the 2017 season. He was the only Elon player to start all 56 games, led the team and ranked second in the league with a .350 average as he recorded a league-best 78 hits and 21 doubles.

Brnovich, who was named CAA Rookie of the Year in 2017, finished the season with a 3.10 ERA and held opponent batters to a .204 average. He struck out 103 batters in 90.0 innings, ranking second in the league in strikeouts and third in number of innings pitched.

The league selected senior catcher Hayden Platt as a honorable mention for the All-CAA team.

Falling in all three games to Penn State this weekend, the Phoenix (0-3) looks to find some better mojo on their home field at Latham Park. The 56-game slate this spring will include 37 games at home, including meetings with 11 teams that made the 2017 NCAA Tournament.

The first road trip for the Phoenix won’t take place until the first weekend in March when the team travels to Georgia Southern University for a three-game matchup. The Phoenix will then return home for six straight games against North Carolina teams, including the University of North Carolina at Greensboro, Appalachian State University and Eastern Carolina University.

March will also see the opening of conference play as the maroon and gold travels to CAA foe James Madison University for a series March 23-25.