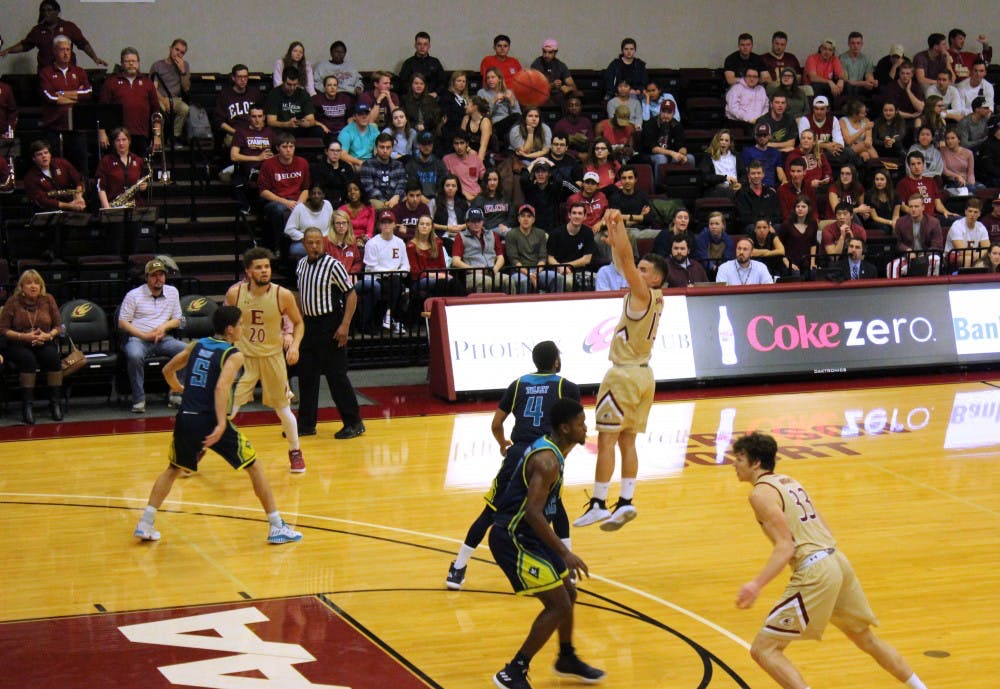 That is how Elon University men’s basketball head coach Matt Matheny described Thursday’s game as his team fell on their home hardwood for the first time this season, dropping an OT thriller to the defending conference champion University of North Carolina at Wilmington, 80-78.

The first half was one dominated by streaks. The Phoenix came out hot, scoring 13 of the game’s first 17 points; however, UNCW utilized the three ball to storm back and take a 24-15 lead, all while riding a 20-2 run. The Seahawks carried a seven-point lead into the break, 46-39.

Unsurprisingly, it was a barrage of threes in the first twenty minutes of play. The Phoenix seem to live and die by the three-pointer this season, and the first half was no exception as the conference leaders in 3 point attempts put up 23 shots from beyond the arc, connecting on just nine of them.

“We like to shoot the three,” Matheny said. “We took a lot of good looks. On paper it may look like we’re taking too many … but I don’t split hairs. If they’re good looks and we recruit shooters and we’ve got good shooters on our team then we’ve got to live with that.”

The game found its pace in the second half. Elon fought back, erasing the 7-point deficit. The Phoenix stifled the UNCW offense down the stretch, using an 11-0 run to take the lead with three and a half minutes left to play. But the Seahawks weren’t going down without a fight.

“I thought we did some really good things particularly we were better in the second half but we just couldn’t get over the hump at the end,” Matheny said.

Elon found themselves down three with just a minute remaining in regulation. Junior forward Tyler Seibring brought the Alumni Gym crowd to their feet with a game tying triple with just 30 seconds left to play. After a UNCW layup and timeout, it was Seibring once again hitting a reverse layup to level the game with two ticks left on the clock.

A UNCW travel on the ensuing inbound gave Elon a chance to win in regulation. Elon turned to Seibring once again, but his floater would not go, and to overtime the game went.

In a pretty stagnant overtime, UNCW hit a late layup to beat the shot clock giving them a two point advantage and Elon the chance to take the last shot.

“It’s exactly how we drew it up in the end” UNCW head coach C.B. McGrath said of redshirt-senior forward Marcus Bryan’s game winner. “We ran a play that we always run.”

Junior guard Sheldon Eberhardt was fouled, but was unable to convert either free throw.

“I thought it was a good shot” Eberhardt said. “It looked like it was going in. But after the miss you’ve just got to keep your head up and keep playing”.

The story of the night for UNCW was their star, junior forward Devontae Cacok, the nation’s leading rebounder. He showed why he holds that recognition once again, pounding the glass for 17 boards.

“He’s strong – that’s what he does," McGrath said. "He has an appetite the rebound.  You can be really physical with him but you can’t move him much.”

“He’s a big strong guy, a veteran who’s been on some very talented teams,” Matheny said. “At the end of the game Cacok showed what he’s capable of doing and he got some big offensive rebounds.”

Matheny, in his ninth season at the helm, has the Phoenix playing well.

“You feel like we’re starting to play better," he said. "I really feel like we’ve played pretty well and I don’t feel any differently now.  It’s not like we played really poorly. I feel like we’re a good team that is playing well and just lost a close one.”

The Phoenix will look to get back on track when they host in-conference rival College of Charleston on Saturday night, Jan. 13 at 7 p.m.