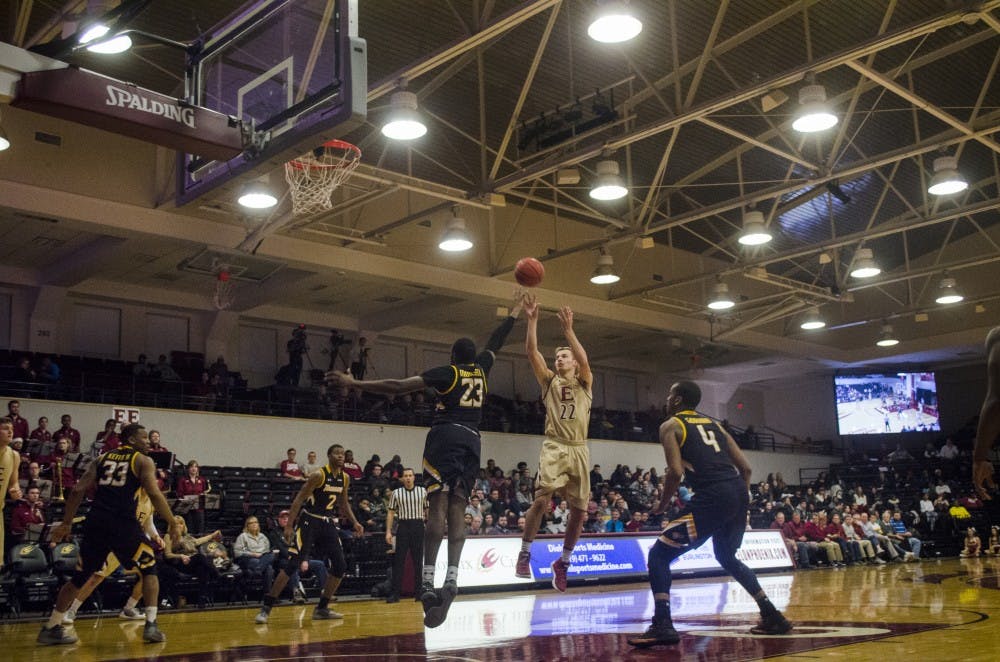 Trailing for most of the game, the Phoenix offense didn’t come alive until the second half, where it was able to secure the 75-72 victory.

“It was a physical game," senior guard Dmitri Thompson said.  "I’m glad it’s over and we’re coming out with a win.  It’s tough playing them. They play hard, they’re aggressive, and it just takes a toll on you, but it’s very fun and exciting.”

Elon entered the night riding a two-game winning streak and are 5-0 at home this season. The Phoenix opened the Colonial Athletic Association play with a 90-75 win against Drexel University on December 30, 2017. With the win against Towson, Elon moves to 2-0 in conference, 6-0 at home and 10-5 overall.

Up by 10 with four minutes remaining in the first half, Elon was able to cut the Towson lead down to four, 31-27, going into halftime.

“If you would have told me that we would shoot 69 percent in the second half, I would’ve said ‘Thank you,’” Matheny said.

For Towson, tonight’s game against the Phoenix was the Tiger’s fourth-straight game on the road, falling in each of the previous three.

The Tigers had a chance to take the lead in the final seconds, but after a missed shot Thompson grabbed the defensive rebound, was fouled and headed to the line. He made both shots and increased the Elon lead from one to three with 10 seconds remaining.

Towson had a chance to force overtime when a three was put up by Starr, but it came up short and Elon was able to remain undefeated inside Alumni Gym this season.

“We gotta defend better,” Matheny said. “When the ball was in the air, I thought overtime. I was glad it missed.”

“Sometimes good offense beats better defensive,” Santa Ana said. “We were able to do the little things at the end to make the stop and come out with a win.”

For Towson, sophomore guard Zane Martin put up 27 points, including 10 points in two minutes during the second half. Senior forward Eddie Keith II added 10 for the Tigers.

“We’ve been on the road the whole season, so I feel like we’re really confident on the road,” Thompson said. “You know, we know what it takes to go into somebody’s arena and beat them. This is a good start to us to get some momentum going into the road trip.”