Female Elon leaders shine as powerful figures in their fields 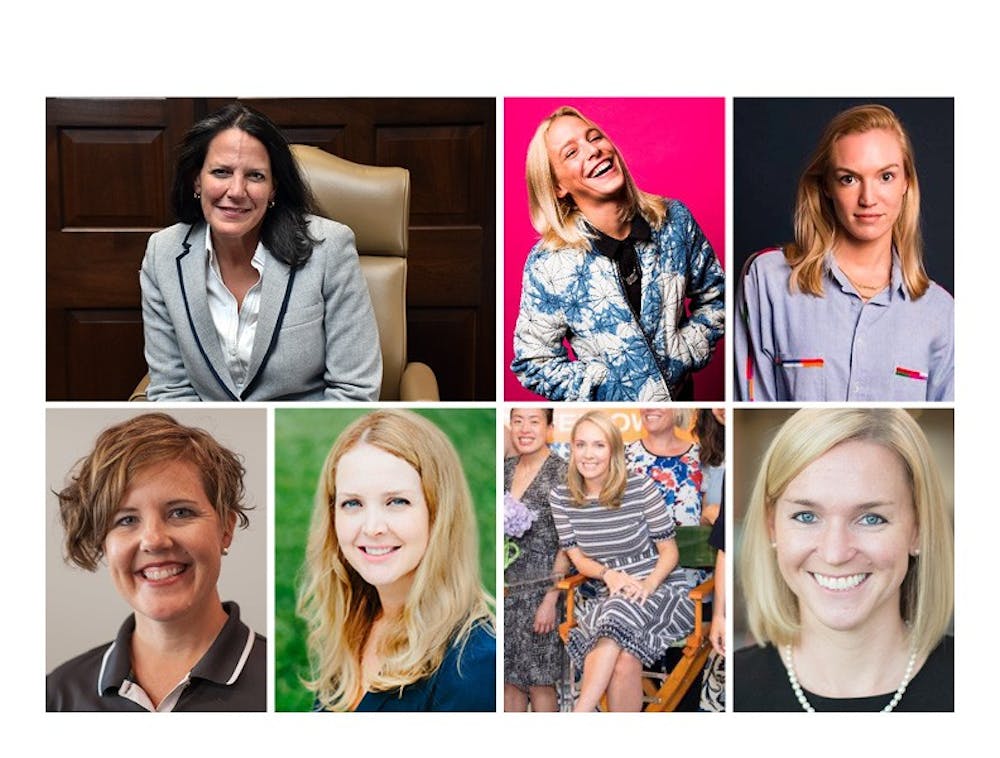 “I asked my dad, ‘Do they let girls do that job,’ and my dad said a very good thing. ‘Well you can be anything you want to be,’” said Connie Book, the next president of Elon University.

The topic of powerful women is one that is strongly represented in the world today. The Women’s Index Study revealed that 86 percent identify femininity as a strength and 76 percent of women believe that the 21st century has become the best time to be female.

Though in recent weeks, sexual assault reports have bombarded the news cycle as more women speak out about inappropriate, and often illegal, practices in the workplace. The allegations bring about questions of women feeling safe in workplaces that are dominated by men abusing their power. In the face of the outpouring of these allegations, women have proven they are important figures in their fields and will not be treated as anything less.

Women are feeling more empowered than ever before and taking matters into their own hands to alter the trend of male dominated workplaces, boardrooms and mastheads. Many women leaders from the Elon community are doing the same.

Connie Book, Elon University’s incoming president, is the current provost of The Citadel, The Military College of South Carolina. As a former Elon faculty member and administrative leader, Book will be returning to Elon as president in March.

From a young age, Book remembers feeling inspired to become a leader by her father telling her she could be anything she wanted to be. Though she never imagined that these dreams of leadership would lead her to become the president of a university.

Book always enjoyed teaching and helping others achieve their goals. Through her time at The Citadel, she realized she not only enjoyed assisting students, but also faculty as well.

One particular opportunity she credits is the ability to lead and guide fellow faculty members at Elon.

“It gave me a chance to lead, and I would want to give other women that same chance,” Book said.

She believes women in all positions, ranging from secretarial work to working as a professor, should be provided with opportunities and assignments that will help them advance their careers and qualify for higher positions.

When Book thinks about the future, she hopes to see a greater number of successful and empowered women.

Gabrielle Raymond McGee is the Vice President of Digital, Marketing and Special Projects for the Tory Burch Foundation. In this role, Gabrielle leads the campaigns, editorial content, online programs, special products and more.

“I’ve always been an intrapreneur and continue to have a passion to empower women entrepreneurs. A few years ago, my team and I launched ToryBurchFoundation.org, which has enabled the Foundation to scale our impact and reach more than 200,000 women in the last year,” McGee said. “More than 10,000 women have used our digital business plan builder and we are just getting started. It’s a dream job with a dream team, company and mission.”

Gabrielle is able to utilize her talents in the numerous opportunities provided at Tory Burch to create, design and develop campaigns, content and digital platforms to support to foundation's mission.

Women CEOs in Fortune 500 companies, like Tory Burch, have increased from zero percent in 1995 to 5.4 percent in 2017, according to the Pew Research Center.

Alanna Vagianos '13 works as the women’s editor at HuffPost in New York City.

Living in New York City is not cheap. For Vagianos, finding a job that paid enough, while staying within the journalism field was a big feat.

“Journalism doesn’t pay the big bucks,” Vagianos said. “So getting to a point in my career where I didn’t feel like this struggling writer has been big for me.”

In her role at HuffPost, Vagianos writes and reports on women’s issues with a focus on sexual violence. She also tackles feminism in entertainment, body image, women in politics and reproductive rights. Vagianos said it is important to maintain self care while tackling the hard issues she sees in her day-to-day reporting.

“The negative emotions are unfortunately just as real,” Vagianos said. “I write a lot about sexual violence so understanding the importance of self care, whether that’s going to therapy or just letting myself unplug from work on the weekends, is really key. Also, working online all day and dealing with trolls is very taxing. Much of it comes back to self-care and knowing my limits.”

This variety of stories ranges from smaller write-ups to longer form pieces that can take weeks to create. But Vagianos’ work doesn’t stop there. She also edits copy, packages stories and runs social media accounts.

“I honestly feel like I’m making an impact every day I go to work,” Vagianos said.

As vice president of human capital at Red Ventures, a marketing company headquartered in South Carolina, Hallie Cornetta ’09 has made her mark in previously a male-dominated environment.

“After starting my career in marketing and business, I found a new sense of passion, purpose and excitement for my people-focused role,” Cornetta said. “My strongest positive emotions are seeing the accomplishments, successes and personal breakthroughs of younger talent I have touched in some way.”

She joined the senior leadership team at age 28, where she was more than 10 years younger than her team — which was 90 percent male.

The struggles she faced were found in trying to understand her value, having belief in her decisions, and to be a thought-leading peer rather than an order-taking subordinate.

Now, three years later, she has found her voice and the senior leadership team is now nearly 40 percent female.

The trend of female leaders climbing the corporate ladder is spreading across industries. On this year’s Fortune 500 List, there were more female CEOs listed than ever before.

Burke graduated from Elon in 2003 with a major in business and a concentration in finance. She then worked for more than a decade in the financial services industry before attaining enough knowledge to start her own firm.

Self-doubt played a huge role in why it took her so long to open her own financial planning firm in an industry that is typically dominated by males.

“I was worried if people would take me seriously being a younger female in finance,” Burke said.

Burke credits her husband, family and business network for pushing her and believing in her.

Burke said she never once in her 12 years of finance worked under a female advisor or manager. This made it difficult to picture what her career could develop into.

She combated this by realizing women are greatly suited for the financial planning field.

“We naturally are organizers and relationship-focused, which are two of the main traits that make you successful in this field,” Burke said.

She often gets asked the question, “How do you manage it all?”

As a wife, mother and businesswoman, she has learned the meaning of balance and realizes that sometimes her needs come first, too.

Robinson graduated Elon College in 1999 and proceeded to get her Masters in Physical Therapy from Elon in 2002.

After graduate school she worked at a hospital before taking a job working as the director of physical therapy for another company.

Robinson knew she wanted to do more with her career.

In 2006 she opened a physical therapy and sports performance company with Lisa Ciaravella — another Elon alumna.

“From the time we decided to start our own business, it took one year of a lot of sweat, planning, market research, fear, guts and trust to open the doors of Phoenix Physical Therapy & Sports Performance, LLC.,” Robinson said.

She didn’t take no for an answer or let other's doubt stop her from succeeding.

“I was told 'no' often,” Robinson said. “Whether by employers, banks, businesses, etc,. The word 'no' became too familiar by others who didn’t think I/we could make it. This just fueled my fire further.”

That is the advice she would give to young ambitious women. Robinson said not to be afraid of rejections — as they are likely to happen in life — but to know there is always another way.

Ledbetter describes her work environment as crazy and fast-paced. The Elon alum is now a lifestyle editor at the HuffPost — her dream job.

In her role as lifestyle editor, she covers what’s going on in the world for their Taste, Travel, Home and Style sections.

“I’ve written a lot of stories with a short shelf life — 24 hours or less — that I’m proud of because of how quick and accurate they were. In news, getting a story up fast matters,” Ledbetter said.

She worked hard to get to her current position. After graduating from Elon in 2013, she worked for a company in Charlotte, where she didn’t feel fulfilled. Ledbetter knew she was the one that needed to make the change.

“I started freelancing on the side and working ungodly hours to hopefully 'make it' as a writer,” Ledbetter said. “I started applying to all kinds of jobs and did lots of interviews. Getting my HuffPost fellowship was the happiest day of my life.”