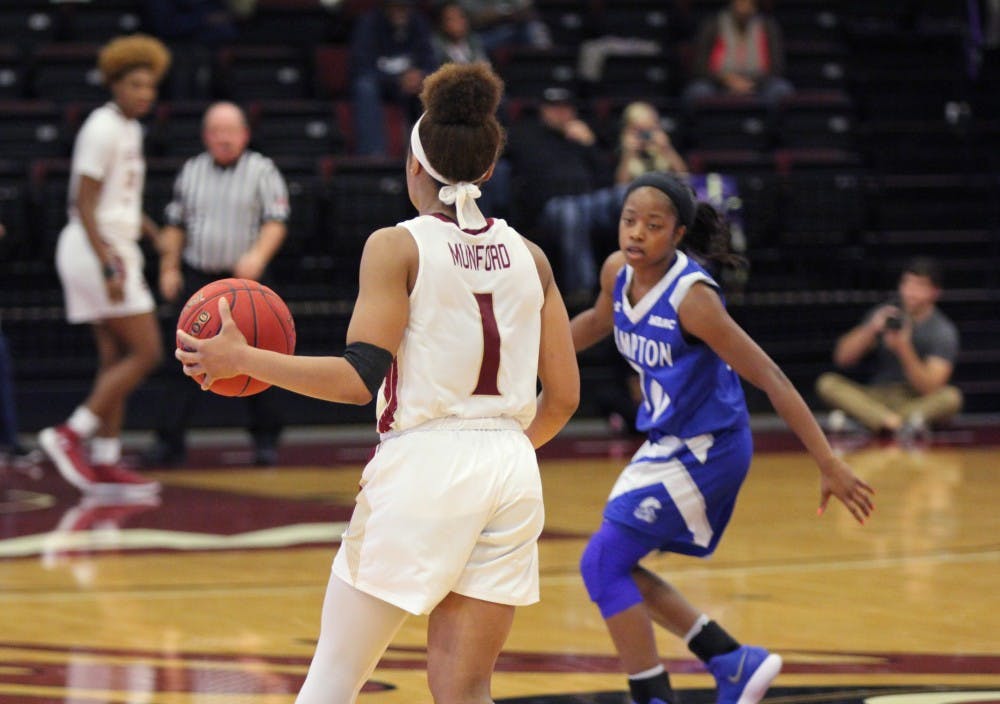 It was the battle of undefeated teams Friday night as the Elon University women’s basketball team (2-0) took on Hampton University (1-0).

The Phoenix’s perfect season was able to stay intact, cruising past the Pirates 82-59.

The Phoenix got off to a hot start when freshman forward Anna Popovic hit a three 22 seconds into the game. From there, the Phoenix built up a 20-15 lead heading into the first break.

Out of the locker room to begin the second quarter, Elon came out firing, going on a 16-0 run at one point. The Phoenix defense held the Pirates to just six points in the second, extending Elon's lead to 28 going into halftime. Sophomore center Ra’Shika White led the Phoenix in scoring in the first half, hitting 9 points across the floor. Sophomore guard Jada Graves and senior guard Shay Burnett each tacked on eight more for Elon.

No matter how big the lead, head coach Charlotte Smith tells her players to keep one thing in mind.

“The score is 0-0,” Smith said. “That’s what we say every time. Don’t go out feeling comfortable and just finish the job.”

The second half was much of the same as the Phoenix never looked back on its lead. Elon built up a 30-point lead through the first 30 minutes.

“Not content,” Smith said after the victory. “You have to stay humble and hungry and that’s what I tell our players all the time. Yes we won, but there are some major strides that we can make in order to be a better team.”

“We’re feeling pretty good, but we still have a lot to improve on and we’re not going to be cocky about it,” Burnett said. “We’re going to be humble and keep working in practice.”

The Phoenix struggled with possession, turning the ball over 21 times after turning it over 32 times in the game against North Carolina A&T.

“We have to find a way to limit the number of turnovers we have because they had 27 points off our 21 turnovers,” Smith said. “A lot of that is youth and we just have to try to find a way to simulate that type of pressure that we’re seeing in the games. So I guess we got to get on our practice players to be a little tougher on us.”

“Coach talks about taking care of … the basketball,” Burnett said. “Yes we make mistakes, but we have to limit those mistakes and me, as a senior, I need to see … I shouldn’t have that many turnovers. But we’re just going to keep working and forget the play before and just keep playing.”

The reigning Mid-Eastern Athletic Conference (MEAC) champion Pirates picked up the loss after defeating the ladies of the University of North Carolina at Chapel Hill 70-66 on Nov. 10.

Up next, the Phoenix travel to Orlando, Florida, to face off against the University of Central Florida on Nov. 22 before heading further south to Fort Lauderdale to play Nov. 24 and 25 in the Puerto Rico Clasico.

“I’m really looking forward to playing these big schools and just playing to the best of our ability and playing like we have been playing the last three games,” Burnett said.