Inside the revival of Elon's football program 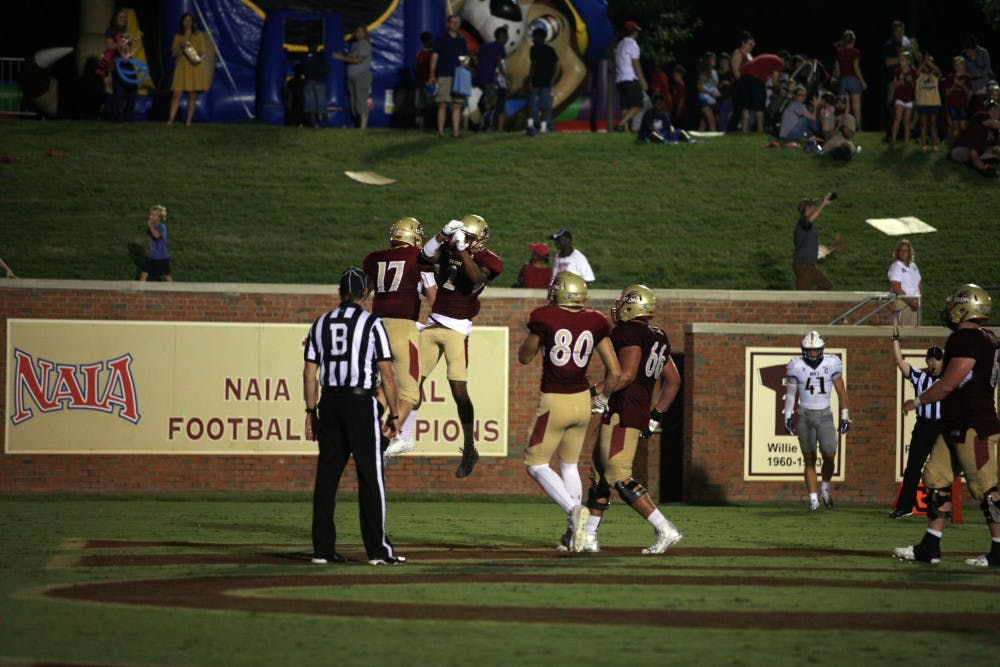 At a team meeting just before the 2017 Elon University football season, new head coach Curt Cignetti told his players something everyone in the room already knew.

“There is no one — no one — that expects us to be any good,” he said. “We get no respect, we don't deserve any respect.”

It was a blunt, but true message. Looking back at Elon football’s accomplishments, or lack thereof, how can you blame him?

The Phoenix hadn’t produced a winning season since 2010. Nor had it made the playoffs since 2009. Since leaving the Southern Conference (SoCon) for the Colonial Athletic Association (CAA) — arguably the hardest conference in the Football Championship Subdivision (FCS) —  in 2014, Elon only won seven games.

But as the university expanded, athletic expectations did, too. The Schar Center was being built from a $12 million donation, the largest single gift in Elon history. Both basketball teams completed winning seasons in 2016 — the women’s squad even won the CAA, earning a NCAA tournament bid.

The time for soft words was over. Football could no longer lag behind.

But Cignetti offered a choice. Sure, the Phoenix was picked to finish second to last in the conference. But if they stayed focused, the outside noise wouldn't matter, he said.

“I know and I believe that if we make the proper commitments and we are willing to pay the price … we will accomplish things no one thinks we can,” he said.

Twelve games and a CAA Coach of the Year award later, he was right. The Phoenix won eight contests, one more than the previous three years combined. Elon (8-4) was on the brink of a conference championship and ranked the No. 7 team in the nation at one point.

A blocked extra point attempt stopped Elon from potentially advancing to the second playoff round.

After the Phoenix’s 28-27 loss against Furman University Nov. 25, Cignetti said the season’s ending disappointed him. But there’s no question this team’s success “set the standard,” for the future as Cignetti said.

Now, the only lingering question is how they did it.

A surprising exit and and a bold entrance

President Leo Lambert didn't expect to interview for a new head coach during Christmas break. But he had no choice in 2016.

Lambert was “taken aback” when Dave Blank, director of athletics, told him Skrosky’s intentions. The three eventually met at Lambert’s home one morning for an hour at 7 a.m. Then, Lambert said it was evident a new coach was needed.

“I think Dave and I were of the mind that we needed to find our next football coach who had successful head coaching experience,” Lambert said. I think we just felt like being in that chair — whether Division III, Division II or Division I — was irreplaceable experience.”

Before Elon, Skrosky coached 21 years. But only one year —  1992 at Ramapo College, a Division III school in New Jersey — was as a head coach.

Blank and search firm consultants whittled the list to eight finalists. Cignetti, head coach of Indiana University of Pennsylvania, was one of them. Since 2011, Cignetti coached the Division II program to a 53-17 record and to the playoffs twice.

Cignetti, 56, coached 29 years as an assistant elsewhere, including as a wide receivers coach at the University of Alabama under the legendary Nick Saban. There, he won the 2009 Football Bowl Subdivision (FBS) national championship and coached Julio Jones, an All-Pro NFL receiver. Lambert said Cignetti’s confidence was contagious. He was unanimously chosen New Year’s Eve.

“He sat at the head of the table in a very relaxed way and said, ‘There’s no reason Elon cannot have a winning football program,’” Lambert said. “I think he brought this air of confidence and made us believe this was going to happen.”

To make it happen, though, he had some work to do. Losing became ingrained here. Miles Williams ‘15, a former safety and captain of the team, said their lack of success tolled him off the field, too.

“When I was a tour guide at Elon, one of the questions that always popped up was, ‘How is the football team?” said Williams, who led the team interceptions (two) and forced fumbles (three) his senior year. “When we weren't playing like I know we could have, that was a tough question to answer.”

When he graduated, Williams said some of his teammates weren’t mature enough yet or didn't entirely buy into the system. He said it was frustrating at times because they were wasting potential. But when Cignetti arrived, senior safety Chris Blair said things changed.

“Coach came in and said he had the blueprint,” said Blair, the sixth leading tackler in Elon history. “We follow our leader. This is a great leader here, and he’s done it before. He’s turned programs around.”

That blueprint included having less physical weekly midseason practices after training camp, demanding attention to detail and emphasizing the mental side of football. In one of his first official moves as coach, Cignetti recruited 14 players in February.

Two of those recruits, freshmen Davis Cheek and Jalen Greene , battled for the starting quarterback position, with Cheek ultimately winning. During his career, Williams said Elon’s offensive struggles handicapped them, mostly from inconsistency at quarterback.

Juniors Connor Christiansen and Daniel Thompson — the quarterbacks in rotation Williams’ senior season — combined for 15 touchdowns the past three years. Christiansen was injured in 2016 and changed positions to defensive back this year. Thompson was the third option behind Greene.

When Elon edged Furman 34-31 the second game after falling to Toledo University 47-13 — an FBS school —  Cheek passed for 301 yards and three scores. Adrian Williams ‘17, a former defensive back, said that was Elon’s statement game. It catalyzed an eight game win streak.

“They were throwing the ball downfield on them and marching,” he said. “That’s something we never really did before and it was exciting to see.”

But Miles Williams said the noticeable difference was on the ground.

The next game against Charleston Southern University at home, running back Malcolm Summers rushed for 178 yards in a 19-17 win. The next game — a 36-33 win against No. 6 ranked Richmond University —  he rushed for 294 yards, the first time an Elon back rushed for more than 200 yards since 2009.

Through six games, his 755 rushing yards led the nation. His season ended then, though, when he tore his hamstring against the College of William and Mary. Still, that dominance was another distinguishing factor.

“We were never able to run the ball like that,” Miles Williams said.

With one thrilling win after another – Elon’s largest margin of victory was eight points — school pride followed. Lambert said the newfound excitement was evident.

“You want to be where we were this past weekend — playing football after Thanksgiving,” Lambert said. “I think it has meant a lot to our student body. Students stayed for the whole game instead of leaving at halftime.

“It has a bigger impact on campus psyche than most people realize.”

Nowhere to go but up

The season ended with losses to the University of New Hampshire, James Madison University — the reigning FCS national champions — and Furman. Elon finished third in the CAA behind JMU and Stony Brook University.  The three game losing streak stung, but Blair said the adversity they faced then will be a building tool for next season.

“I think these guys will learn from it that are coming back next year— learn from different things that we have faced as a team and continue to get better,” Blair said. “That's all I can really ask for.”

The team had 10 seniors, but only five of them were listed at starters on the depth chart. Miles Williams said the team was young when he played. But now that they’ve developed, they’re well positioned. He said they have “nowhere to go but up.” Cheek agreed.

“National championship — that’s the goal,” he said.  “We have the people here and our coaches are phenomenal … the guys here are just going to get better.”

Cignetti didn't make that bold of a statement, but he said he was proud of how far the program improved. After the season, he told the press the same thing he told his team all those months ago. They accomplished things no one thought they could. And they earned the respect they didn't have.

“I think there were a lot of people that were losing hope, who had lost hope,” Cignetti said. “I think this shows that if you believe it, you can make it happen.”

This article has been clarified to say the team had less physical practices after training camp.