"Hello, Dolly!" performers connect their lives to their characters 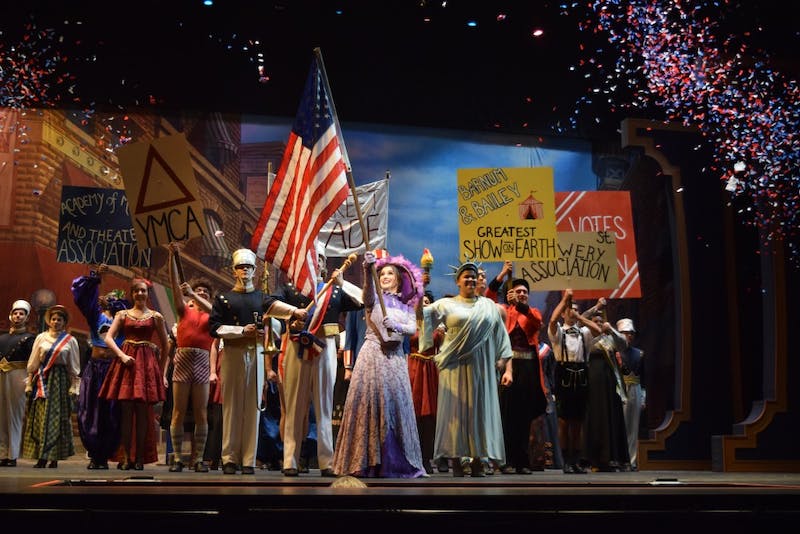 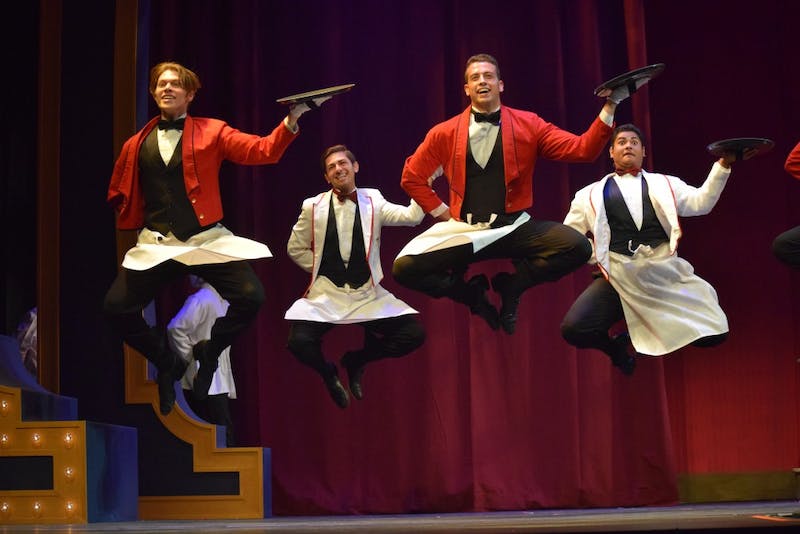 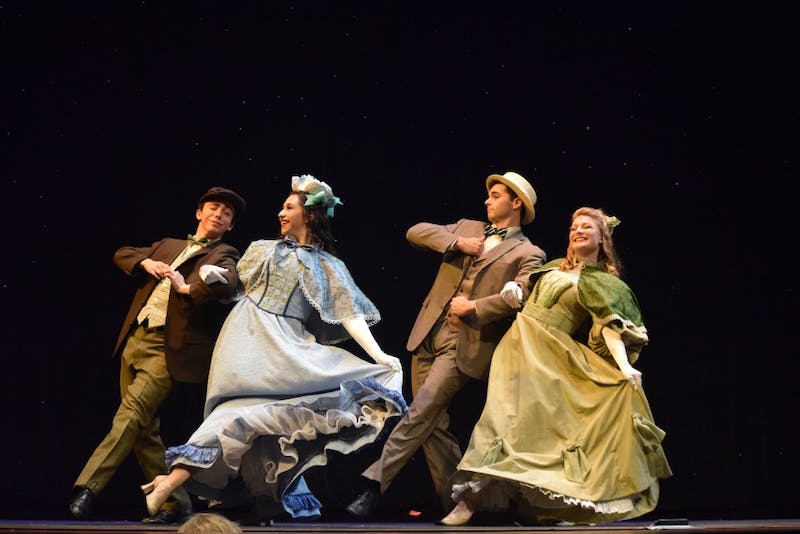 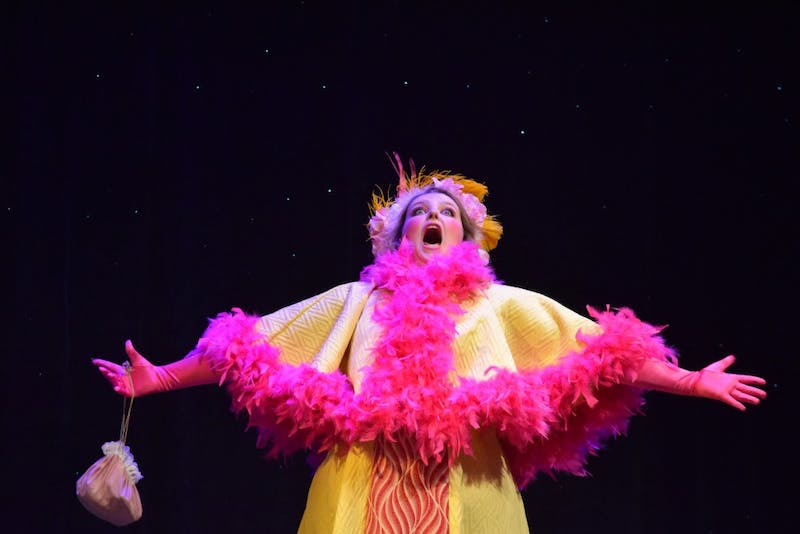 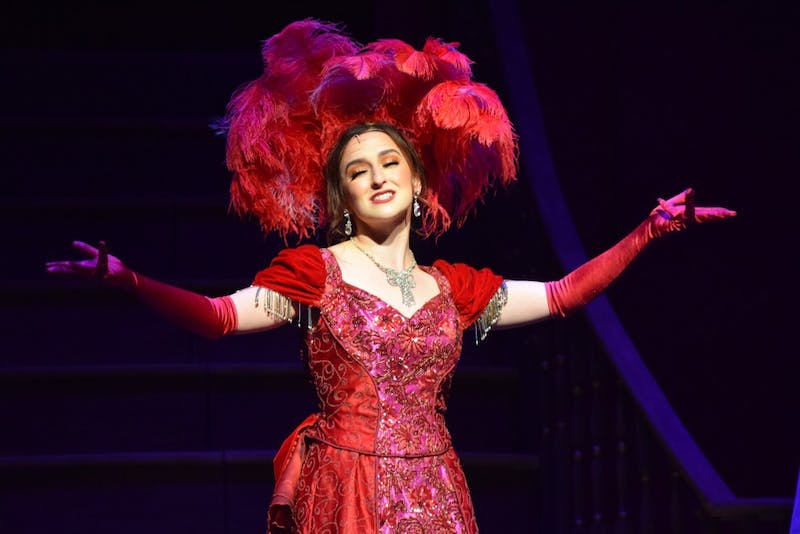 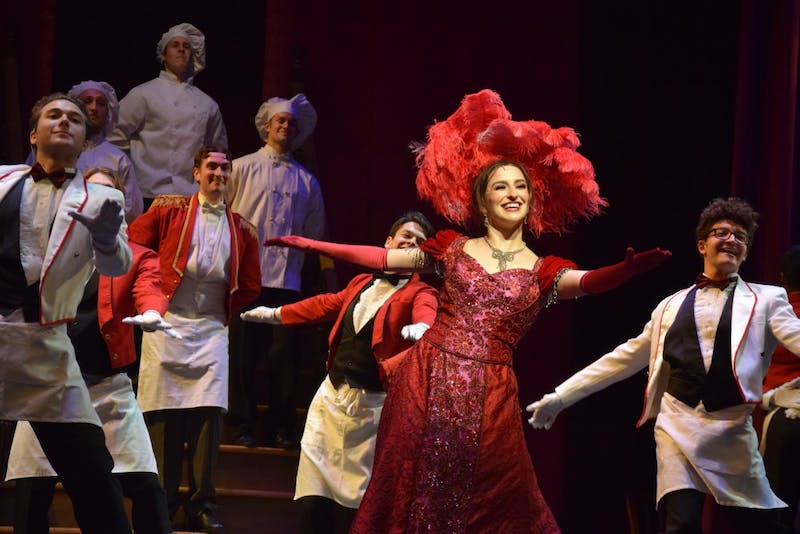 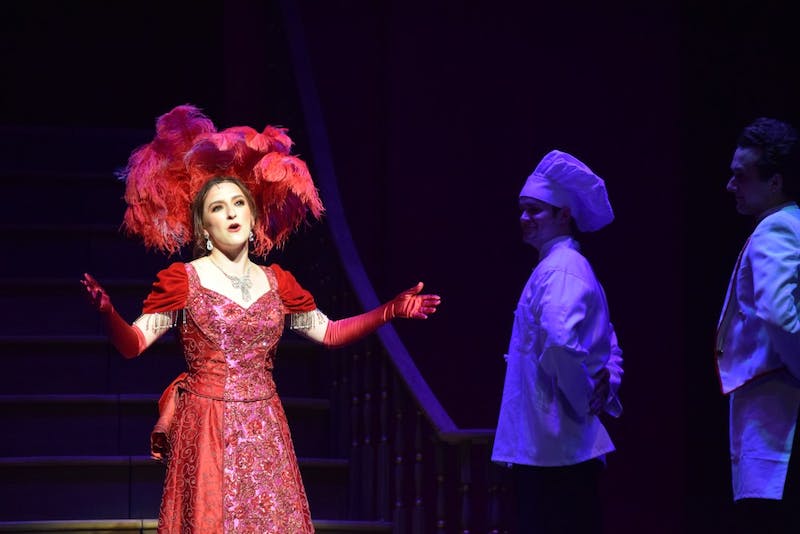 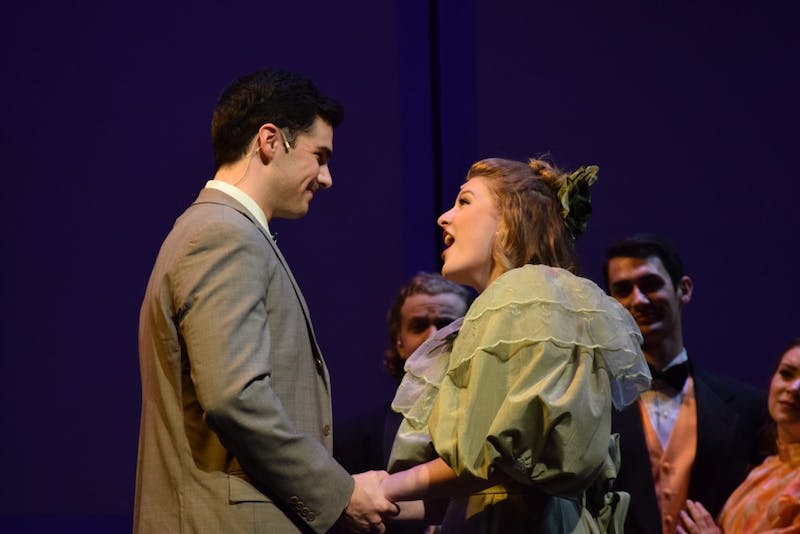 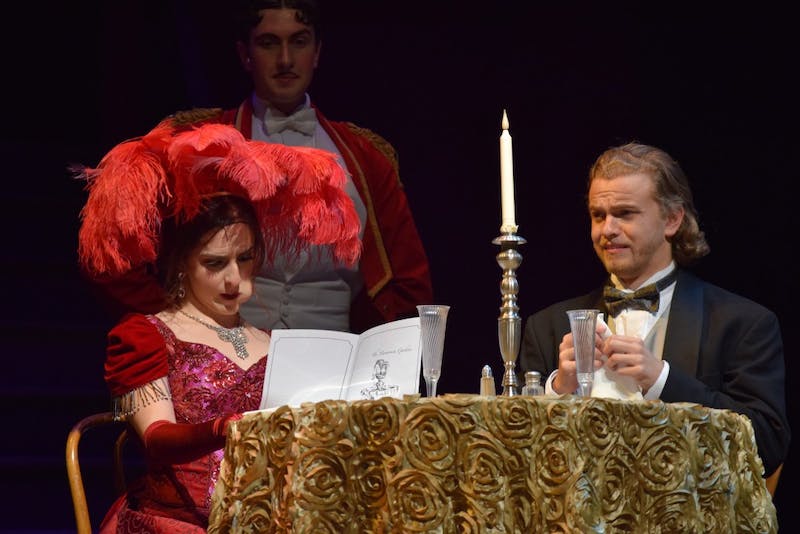 The department of performing arts presents "Hello, Dolly!" as the fall production.

Correction: In an earlier version of the story, the name of the actress playing Dolly Levi was misspelled. Her name is Chloe Robin. Elon News Network regrets the error.

"Hello, Dolly!” tells the adventures of mischievous meddler Dolly Levi as she travels to Yonkers, New York, for the matchmaking scheme of a lifetime. The department of performing arts presents this turn of the century pick-me-up performance in a celebration of life’s every moment.

Elon University brings the musical to the McCrary Theatre stage this year — the year it returns to Broadway — in a larger-than-life show emphasized by outbursts of mad giggles, blundering gentlemen and grandiose verbosity. The show’s stars are portrayed by musical theater students who use their own experiences and strengths to give “Hello, Dolly!” its timeless, giddy essence.

There’s a moment where Chloe Robin stops singing on stage. She’s directed to move forward, but she can’t simply walk. She’s a meddling, middle-aged matchmaker who constantly reflects on memories of her late husband. She’s been told by her choreographer to envision herself on her wedding day, to see herself gliding down the aisle, then the first dance. The happiest moments of her life were when her husband was living by her side.

Robin has never been married. Still, she has to find some way to connect to Dolly Levi, the leading lady of the show. In these minutes between the opening of the curtains and her run-through backstage, she takes the intentions of the staging and finds a connection in her own personal emotion. She’s transformed.

The transformation isn’t in the ruffles and ribbons. Robin's relationship with Dolly began weeks before opening night. On script, they didn’t have much in common.

“I would steer away from someone with that big of a personality,” Robin said. “Dolly is very confident, outspoken and can manipulate people into giving her what she wants. I’m definitely introverted — and not so manipulative.”

As an actress, it’s Robin's job to channel as much of herself into Dolly while onstage, despite how they would connect in real life.

“Every day she became more the character,” said Michael Jablonski, “Hello, Dolly!” choreographer. “She’s playing a role that’s 40 years too old for her. One of the first days of rehearsals, she came up to me and asked how old she should play the role. And I said, ‘You should play it as yourself.’ And she’s doing wonderfully at it.”

Jablonski choreographed each character purposefully to marry the personality of the role with the strengths of its actor. The choreography, as well as the music, artfully intertwine the two to tell a complete character story.

“We can make informed acting choices based on the clues given in the music and the intention set with the choreography,” Robin said.

Her character choices succeed in creating the dynamic Dolly as a result of hard work and continual experimentation.

“She’s such a strong actor and has a great presence on stage,” Jablonski said. “Chloe works really hard every time, and she never says, ‘I can’t do that.’ She says, ‘Alright, let me work on it.’”

Audiences will watch Dolly waltz, kick and turn through flared skirts and under heavy hat plumage. It’s clear that the woman on stage is no introvert — and has a scheme up her sleeve. Here under the spotlight, they belong together as one, no matter their differences.

“It’s fun to play someone completely opposite from myself,” Robin said.

Junior Jake Smith finds enough similarity in his character, Cornelius Hackl, to love portraying him each night. While Cornelius’ inexperience has him scrambling to cover up his open honesty with a blurted phrase or dive into a closet, Smith identifies with his eagerness for adventure.

“I’m the type of person that would much rather skip school and go to New York for the day than sit all day,” Smith said. “He’s a little timid and shy at times, but I think we would get along.”

Smith found the hard facts about Cornelius he could connect to in the script.

“At this stage in my life, I’m predominately playing goofy leading men, and so with most of my characters they’re a pretty high level of connection between us,” Smith said. “But beneath the surface level, it’s the music and choreography that pull him in deeper.”

Jalonski praises the way Smith carries himself on stage, but Smith wasn’t always a strong dancer. Growing up, he spent time playing sports, not taking dance classes. He pulled from his own journey to perform as Cornelius, who is not supposed to be a good dancer.

“Dolly describes his dancing as athletic, which has been my struggle in the program,” Smith said. “I’m very much a singer and an actor, so I’ve been working very hard on my dance. And when I finally get cast in a role where I’ll be dancing a ton — it’s not supposed to look polished.”

“This isn’t a character I would have ever seen myself playing,” Hamilton said. "When I started the rehearsal process I was thinking, ‘I am nothing like this woman at all.’”

After months of rehearsal and encouragement from the artistic team, Hamilton finally made a connection.

“I realized that there are bits of Irene in anyone who is looking for fresh start,” Hamilton said. “I realized I could be her.”

Jablonski saw the newfound relationship between Hamilton and Irene reflected after months of encouragement from the artistic team.

“I kept pushing her to trust herself and find the joy in it,” Jablonski said. “There was one specific day where we finished the number, and she told me she had never felt that beautiful on stage before. It’s those little tiny breakthroughs.”

Her first scene comes midway through the performance, and while everyone is getting ready and running on stage, she’s still sitting, her hair pinned back.

“Once everybody else goes on stage, I take my hair out, do my lipstick and put my full costume on,” Hamilton said. “I go out into the other theater by myself and sing my song. It helps me get into Irene.”

Hamilton connects her personal life to her character later in the show when Irene teaches Cornelius to dance. Hamilton was Smith’s dance Teaching Assistant, and both similarly had to put in extra time to expand from accomplished actors and singers to versatile dancers.

“Watching Jake do that in real life and then actually doing that on stage, too, is fun for both of us,” Hamilton said. “It’s something Jake and I have in common that Irene and Cornelius have in common, too.”

Sophomore Andrew Purdy thinks he can learn a lot from the exuberant Barnaby Tucker.

“He’s larger than life, but he still has real desires and emotions,” Purdy said. “He’s so joyful and has such an optimistic outlook.”

Barnaby’s naivety can cause trouble, but when getting himself into character, Purdy attempts to see everything about Barnaby as a strength.

“When you’re living your life, you want to see yourself in the most positive light you can,” Purdy said. “I think that’s important when you’re playing a character, too — to not look at it like an outsider.”

Barnaby’s persona is also demonstrated to the audience in the way Purdy dances. Jablonski knew during casting that he needed an actor who could keep up with Barnaby’s energy.

As the musical number “Put On Your Sunday Clothes” closes, senior Mara Wilson is watching and waving to her castmates filing off stage. It’s one of her favorite musical theater numbers of all time, and it’s the one that places her in the world of “Hello, Dolly!” right before she steps into the spotlight for the first time.

“It puts me in the perfect mood to begin in the show,” Walters said. “Seeing so many of my friends shine onstage makes me so happy and grateful — two qualities of Minnie’s that help define who she is.”

Genuinely feeling these emotions as she’s entering the show set her up for an ideal entrance.

“Real, true acting is using your own experience — your own emotional connection, your sense memory and your life to bring yourself to a character,” Jablonski said. “And then a director and choreographer guide you on the journey.”

Wilson has to prepare physically as well as emotionally in order to totally become her character. She runs through additional vocal warm-ups that she wouldn’t normally because of Minnie’s tendency to scare easy.

“Minnie screams quite often, and doing these multiple times in the show — multiple times per week — can be very draining,” Wilson said. “I have to be properly warmed up, so it sits in a place that is healthy, comfortable and consistent. It sounds very abrupt and probably scary, but it’s actually heavily calculated and rehearsed.”

“It’s a gradual process and I don’t think someone just turns the ignition and all of a sudden, they’re that character,” Jablonski said. “It’s like when you see someone growing up. You don’t notice when you’re with them every day but after a time apart — from the first rehearsal to the last — it’s like, ‘You’re so different.’”