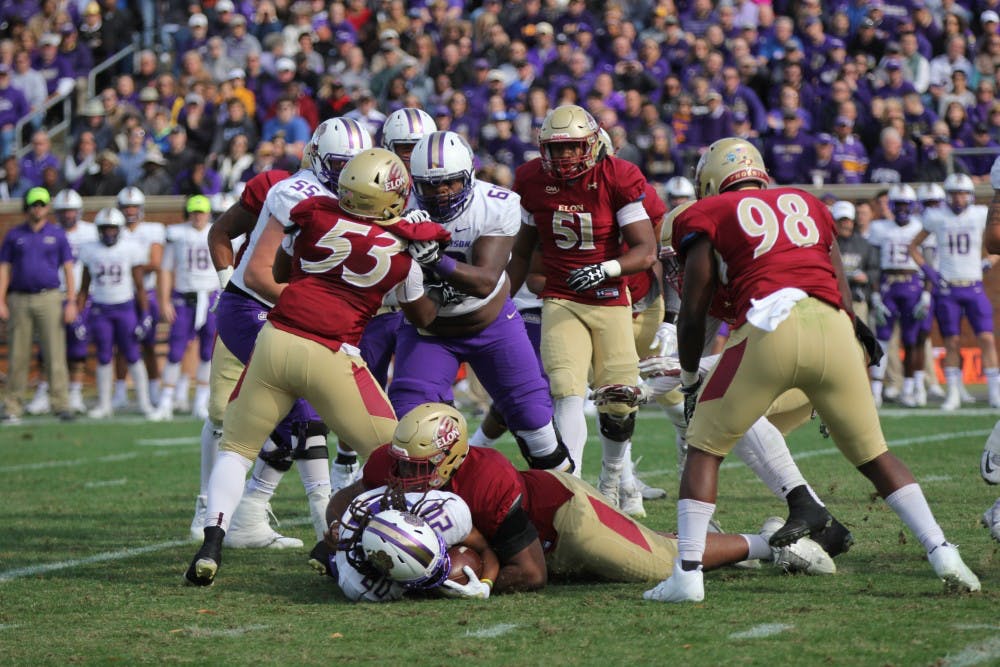 Projected on a television in Elon’s weight room and posted on some players social media feeds Saturday were the words, “Why Not Us?” It’s a motto that seems to define the Phoenix’s head-turning season. After picked to finish second to last in the Colonial Athletic Association preseason poll, Elon was on the brink of a CAA title.

When the game was over, the marching band played Elon’s fight song, and a team was smiling in the endzone posing for pictures.

But that team wasn’t the Phoenix.

After losing to James Madison University 31-3 Saturday, the Phoenix walked to its locker room with lowered heads in its final regular season game. And now, with the Football Championship Subdivision playoffs looming in the near future, instead of asking, “Why not us,” Elon (8-3, 6-2) is wondering what will happen next.

JMU quarterback Bryan Schor passed for 214 yards and rushed for a career high three touchdowns, Elon quarterback Davis Cheek threw for 125 yards, and Elon running backs Brelynd Cyphers and De'Sean McNair combined for 131 rushing yards as the Dukes — the No.1 team in the country — outlasted Elon to win its third-straight CAA championship. It’s the sixth time JMU (11-0, 8-0) has beaten Elon in as many games. The Dukes, who are defending FCS national champions,  remained unbeaten for their second consecutive regular season.

“They’ve got a lot of talent, but they are also very experienced and mature, “ said Elon head coach Curt Cignettii. “That’s a seasoned football team and they played like a championship team today."

A 23-yard scramble by Schor and a 36-yard over-the shoulder catch from receiver Terrence Alls over Elon cornerback Gregg Liggs Jr. positionted the Dukes for a 19-yard field goal with just over a minute remaining in the first quarter. On JMU's next drive, Schor rushed to the left side, outran the defensive line and scored a 21-yard rushing touchdown after safety Chris Blair missed the tackle. Right before halftime, Schor ended a seven play, 45-yard drive with a two-yard rushing touchdown, making the score 17-0.

Elon did have chances to score — including two fourth down opportunities when quarterback Davis Cheek threw shots toward the end zone. But on both instances — the first to receiver Kortez Weeks and then to receiver Corey Joyner — the balls were slightly overthrown.

“We had a couple fourth down opportunities where we took a shot and tried to isolate a safety on a double-move route for a big hit,” Cignetti said. “I thought going in that our chance of winning this game would have to hit one or two of those kinds of things. We weren’t able to complete them.

“I think if we could’ve clicked on a couple of those plays early in the game, there’s no telling.”

“To open the third quarter, the punt block … you just can’t do that,” Cignetti said. “That puts you further behind.”

But with the playoffs approaching, the Phoenix needs to brush the loss aside.

Elon is all but assured to snag a postseason bid. JMU and Stony Brook — both teams ahead of Elon in the CAA standings — won Saturday, making  Elon finish third in the league. The Playoff Selection show is tomorrow at 11 a.m. on ESPNU to determine who and where Elon will play. Blair, a fifth-year senior who never experienced a winning season, said he’s excited to be in this situation.

But he knows there’s still a lot left to do. And if this season is any indicator of the post season, the Phoenix can still ask the question, "Why not us?"

“I’m proud of my team,“ he said. “Proud to have this opportunity. But it was expected from the jump. Coach came in and said he had the blueprint, laid it down and now we’re in this position. But you got to capitalize on whoever we play next."