The future of the Iran Nuclear Deal is uncertain 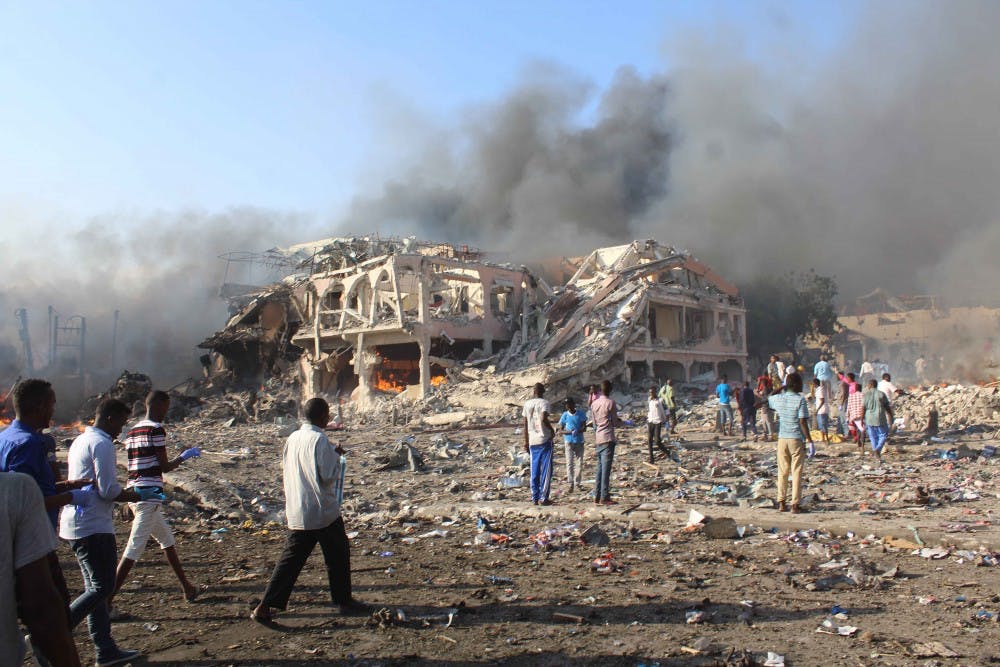 The explosion site near Safari hotel in Mogadishu, capital of Somalia on Oct. 14, 2017. At least 40 people were killed and several others injured in a deadly bomb explosion near a popular hotel in Somali capital of Mogadishu on Saturday, the police said. Photo courtesy of Tribune News Service.

The Iran-Nuclear Deal was signed in 2015 by the Islamic Republic of Iran and the P5+1 countries of China, France, Germany, Russia, the United Kingdom and the United States. The deal was created to combat Iran’s nuclear programs and recently has come under criticism by the Trump Administration.

Q:  What is the Iran Deal? When was it established? Why?

A: The “Iran Deal,” formally called the Joint Comprehensive Plan of Action, is a multilateral agreement signed in summer 2015 effectively to scrutinize the Iranian nuclear program. It became effective in early 2016.

Q: What are the current sanctions on Iran?

Q: What was President Trump’s recent statement regarding the Iran Deal?

A: On Oct. 13, the president announced that his administration aims “to ensure that Iran never… acquires a nuclear weapon.” The president also said he will not certify the deal is worth the suspension of sanctions. Whereas the president has voiced his strong skepticism of the deal since his campaign, earlier he reluctantly certified the deal twice and continued to express his dissatisfaction with the deal.

Q: What are the potential benefits or consequences of this stance?

A: There are a number of potential consequences of this stance. Most notably this and similar statements may simply backfire, and possibly lead to outcomes it is designed to confront. This represents a major change of policy for the United States, which is but one of the parties to this treaty. Should the United States follow along and deviate from the deal while others do not share the same concerns, the deal potentially lives on with the exclusion of the Unitde States.

In that scenario, we may see an interesting situation where the United States imposes sanctions on Iran again but other major world powers not doing so. The United States, then, finds itself at odds with European, Chinese, and other governments, multinational companies doing business in Iran.

If there is any benefit in the vague place between nullifying the U.S. commitment to this treaty or not, the United States gains more power over this issue and others related to Iran (i.e. Syria). This is a stretch to find a benefit to this stance at the moment. Diplomacy, continued engagements still offer more in dealing with Iran.

Q: How do other countries involved view the deal?

A: Existing nuclear powers appear to be in full support of the deal. The most notable unpleasant parties are Iran’s regional neighbors: Israel and Saudi Arabia. After the president’s statement, other parties to the deal have continued to express their adherence to the agreement, and called on the U.S. to do the same.

Q: Iran’s President does not intend to consider any amendments to the deal. What does this mean for the future of our diplomacy with that country?

A: As long as the other parties are backing the deal, Iranian leadership will feel no pressure or reason to revisit the deal. The deal arguably can go on without the United States being a party to it and at its expense. Iran’s foreign minister states, “nobody would trust a U.S. administration to engage in any long-term negotiation” if the deal is changed.

A: Let’s take this on with two contrasting perspectives about international relations.

If states back out of their commitments without clear evidence, that has wide ranging implications beyond its most immediate contexts. Again, consider if and how leaders’ and states’ track record matters in world politics.