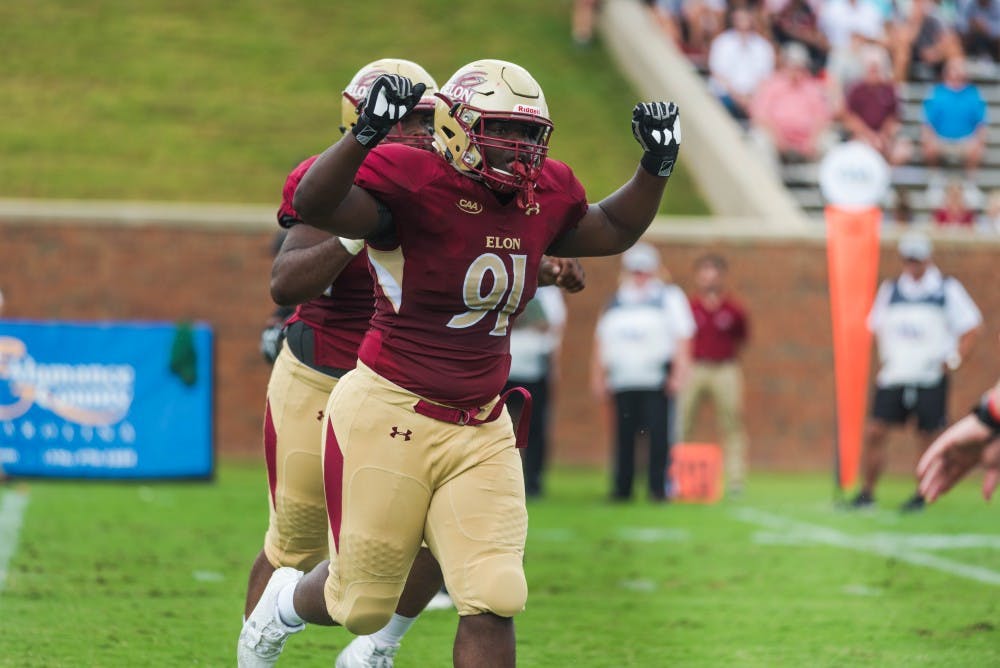 My roommate and I jabbed in a number of heated debates last year regarding the sports world whenever we got the chance. As much as I hate to admit it, he won most of them.

I guessed the Carolina Panthers would return to the Super Bowl, while he said they wouldn’t make the playoffs. He was right. I said Louisville quarterback Lamar Jackson wouldn’t win the Heisman trophy. My roommate laughed at me when Jackson accepted the award after becoming the only Football Bowl Subdivision (FBS) player to pass for 3,300 yards and rush for 1,500 in a season.

When he told me Elon University’s football team finally turned the corner this offseason, I wanted to believe him, but I wasn’t fully convinced. Now, I am never questioning what he says again.

Through six games this season, the Phoenix has lost only one game — and it was against an FBS opponent. It is Elon’s best start to a season in nine years, and it seems like the team shatters every internal record each time it plays.

For a team that was picked to finish second to last in the Colonial Athletic Association (CAA) preseason poll, it is safe to say it does not care what other people think.

Elon’s 25-17 win against William & Mary on Saturday was expected, but that is a situation the Phoenix has rarely experienced in years past. If the Phoenix fails to win another game, it is still guaranteed to have a 45 percent winning rate. Since 2014 — Elon’s first season in the CAA — the Phoenix’s winning percentages were 8 percent, 36 percent and 18 percent, respectively. The Phoenix is in unchartered territory, but first-year head coach Curt Cignetti wants to continue that heading into the bye week.

“It’s a great team win, tremendous effort,” Cignetti said. “I’m really happy for the guys. We have a chance to rest up and heal a little bit and with the goal being to have a strong second-half to the season.”

Factors propelling the Phoenix have been its physicality on offense and defense. Through six games, running back Malcolm Summers already has 134 carries for 772 yards. Last season, he only had 108 carries.

On defense against William & Mary, the Phoenix shined. Elon snagged one interception, making it three consecutive weeks Elon has taken the ball away in the air. Elon forced 11 sacks in the last two games, and has held three CAA opponents to under 200 yards for the first time since 2015. Quarterback Davis Cheek said Elon’s seven sack, one safety performance is proof of the effort his defense puts in.

“It’s nothing new.They put in the work and they do everything they can during the week to prepare and that’s what you get,” Cheek said.

The next five games on the schedule will be a true test for Elon. The Phoenix plays three ranked opponents including James Madison University, who won the national championship last year. No matter the result, Cignetti’s revival of the Phoenix football team is evident.

My roommate tried to warn me, but I did not believe him. Now that Elon football has proven themselves, hopefully the rest of Elon’s community will not make the same mistake as me.