How Smitty’s owner found her way into Elon’s heart 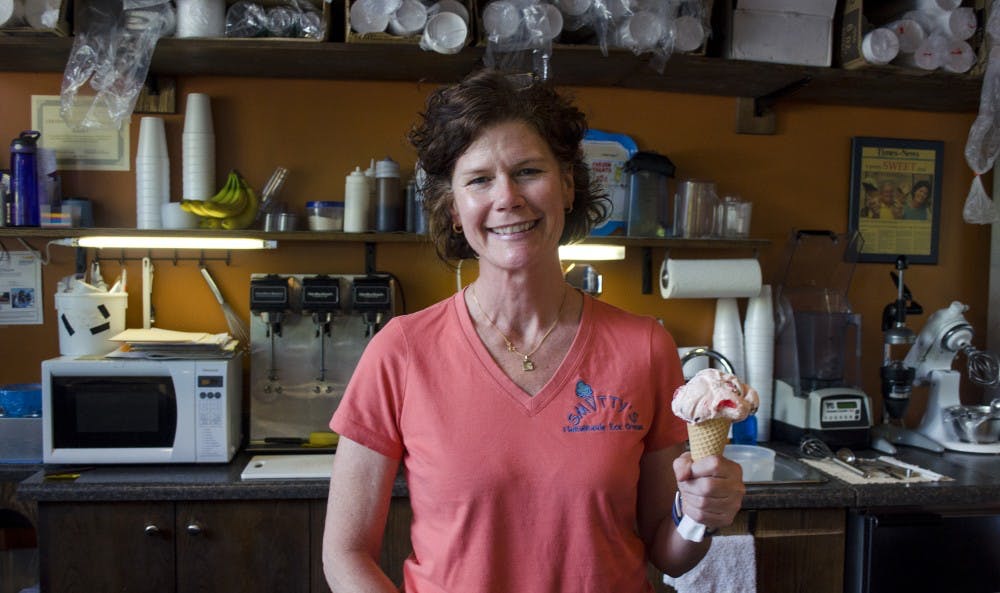 
Smitty's, an Elon University favorite, will open their third location later this summer in downtown Elon.

There are 5,189 miles between Elon and Abidjan, Ivory Coast. The time difference is four hours, and Abidjan has a population of 4.7 million, about 4.69 million more people than there are in the town of Elon. But both have one characteristic in common — a love of ice cream.

In 2001, Amy Nakhle was living in Abidjan with her family when she realized it was time for a change.

When Nakhle told her family she would be moving back to North Carolina, they had many questions including: “What are your plans?”

“We didn’t have any plans,” Nakhle said. “We had just made the decision, and so Tom [her brother-in-law at the time] says, ‘You know we’ve been thinking about this, we’ve always wanted to open an ice cream store, would you be interested in partnering with us?’ And it was kind of a no-brainer.”

“We loved ice cream,” Nakhle said. “We always frequented the little ice cream store that was in our neighborhood when we were living in Abidjan and we had always been in business for ourselves, so it made sense to sort of stay entrepreneurial and self-employed and so we jumped on the ice cream dreamwagon and that was it.”

But, it wasn’t until 2012 that Smitty’s finally made its way just down the road to Elon.

“Elon had actually pursued us about bringing Smitty’s to downtown Elon,” Nakhle said. “The university wanted to raise the profile of the commercial center here and all small towns want to have an ice cream store in them. It was a good fit.”

Smitty’s currently has two locations, one in Graham on North Main Street and the other in Downtown Elon.

There is a Kickstarter campaign now open to help raise money for the new location. The page will close on May 9, and currently has raised $7,962 of a $20,000 goal.

Even before Smitty’s opened their Elon location, they were already the “Official Ice Cream of Elon University” and had been at all football and basketball games since 2003.

“We had a good student base already. The students were already coming to the store. They liked what we did,” Nakhle said. “We’re local, we’re family and very community-based. We crunched the numbers and it looked like it was something that would make sense.”

Despite being the official ice cream of Elon and wanting to open an actual store on campus, there just wasn’t space for it at the time. Nakhle and her family had to wait patiently for quite a while.

“We had to really wait for a spot to open up, it was on our radar for probably a couple of years before something actually came through. As soon as there was an opportunity, we grabbed it,” she said. “We found out that John McDonald was going to be working on this building and was looking for tenants, probably a year and a half before they actually started working on the building. President Leo Lambert had held a meeting or two with business leaders in the area to try and drum up some interest in moving into downtown Elon a few years before that so it came on our radar at that time.”

John McDonald, co-owner of EDG Properties, LLC, played a leading role in the development and construction of Park Place at Elon apartments, as well as the Elon Town Center, which houses the Barnes & Noble at Elon University, Pandora’s Pies, Smitty’s Ice Cream and office space for Guy Carpenter, a business management consultant.

Elon graduates Jeff MacKenzie ’79 and Peter Ustach ’11, owners of Pandora’s Pies, previously owned The Fat Frogg as well. The combination of Pandora’s and Smitty’s seems to go hand-in-hand easily and has been beneficial to both Nakhle, and Jeff and Peter.

“Peter and Jeff, who were the owners of The Fat Frogg, were thinking they wanted to take the entire space. And so we sat down with them and convinced them that it would be a really great idea to partner together to do this,”she said. “Even though we are separate entities, we’d share space. They agreed with us that it made sense to sort of carry the burden. It’s always a risk anytime you open a new business and so to share that risk a little bit appealed to them. We take up so little space so it just made a lot of sense.”

While both current locations sell the ice cream, Nakhle says they couldn’t be more different.

“There’s definitely lots of good energy. Graham has good energy as well — it’s just of a different sort. There is very different diversity between the two locations. Graham is much more community based, as in people from Alamance County having grown up here, been raised here, have deep roots here — that small town feel — and just a more diverse customer base that we have over there.”

Even despite the emptiness of Elon when the students are gone, Smitty’s still stays open during the summer months.

“Ice cream loves summer, right? But Elon’s gone in the summer so we have different seasons, practically, which is not a bad thing. When Elon is slower we can concentrate more on Graham, which is a much faster-paced environment at that point,” she said. “They complement each other really well.”

She also added that during the summertime, downtown Elon and all of its local businesses tends to see a spike in the number of members of the local community who come out. Nakhle and her fellow local business owners would love to see even more people walking around town in the summer, and they still want to continue to raise the profile of downtown Elon.

Elon students also make up a good portion of the staff at Smitty’s, and Nakhle says that they’re all top-notch employees.

“I thoroughly enjoy working with our students, my one complaint is that they’re never available. Elon engages them so much that they don’t have enough time to work, Nakhle said. “And that’s not a bad complaint to have.”

Smitty’s will open their third location in downtown Burlington at 107 E. Front Street later this summer. Nakhle has done everything from ice cream scooper to accountant, but with the upcoming opening of her third business, Nakhle has given up the scooper for some checkbooks and extra time to work with other businesses in the area to broaden the reach of the community.

When you do business in a small college town, you have no choice but to cater to the students and faculty that live at or near Elon. They’re your number one customers. That being said, the lack of other customers emphasizes how important it is for small businesses such as Smitty’s and Pandora’s to build strong relationships with those members of the Elon community.

“It’s been one of the most positive experiences we’ve ever had as a small business,” Nakhle said about interacting with the Elon community since 2012. “The Elon community is incredibly welcoming and warm, and we love being here. We love the students, we love the staff and faculty and I think they love us back, so it’s really important to us that we have good relationships with our customer base and I think we work hard to nurture that.”

Sophomore Benton Ashe thinks that Smitty’s has had a positive impact on campus. “I think it offers a good treat for college students, especially after you just get your pizza from Pandora’s.”

Ashe said that Smitty’s has the power to bring people together — one of the most important things about them being here on campus.

“People want to have a good time and treat themselves,” Ashe said. “Smitty’s is a good place to do both of those things.”