The current seniors began Elon's program four years ago, and leave behind a legacy of success, trust and chemistry for the future teams. 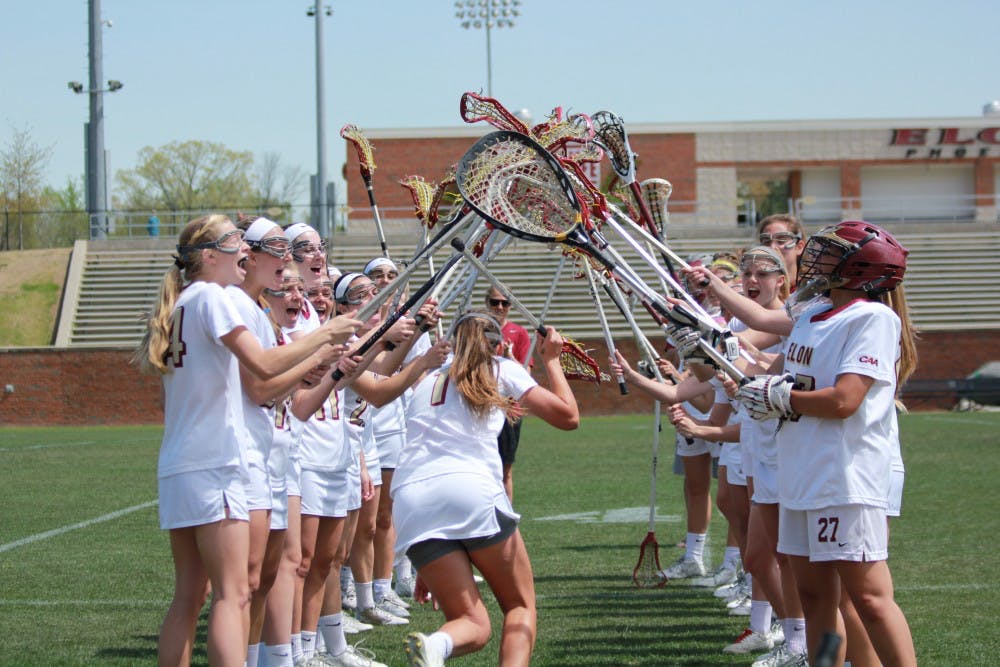 Sloane Kessler committed to an Elon University women’s lacrosse team with no current players, no history and no other recruits.

She can’t remember if the Phoenix had a locker room yet.

Kessler was a junior on her high school’s junior varsity team at the time, and got a tip from one of her friends that a Duke University assistant, Josh Hexter, had just taken the head coaching job at Elon. At her friend’s insistence, Kessler got in touch with Hexter.

It was easy for Kessler to see Hexter’s vision for Elon, which would be starting its program in her freshman year, one of national prominence and continued levels of success.

“If he could have that kind of trust in me, I could have that belief in him that he was going to take this program to new levels,” Kessler said. “Knowing that I could make my stamp on a new program and have a chance for my class to write the story for it was something I couldn’t really pass up.”

Four years later, Kessler and the senior class of players who started the program are wrapping up their Elon careers having laid a foundation of success, trust and chemistry for a team that’s been a mainstay in national lacrosse rankings all season.

They’ll play their final home game Sunday, and hope to reach the Colonial Athletic Association Tournament — and perhaps beyond — to leave one lasting mark on a program that’s taken shape because of them.

“As freshmen, we didn’t know what we were doing at all,” senior defender Lane Huger said. “We kind of learned along the way. Four years later, we’ve set the tone of how we want this program to go. That’s definitely the coolest thing about what we’ve done here the past four years.”

Hexter laughs when thinking about the recruiting pitch he made to the current seniors. In fact, he really didn’t have to sell much at all.

The appeal of beginning a new program stood out to many, and that helped form the core of what would be the program’s first class.

There was Kessler, who’d score the program’s first goal, and Anna Vitton, both attackers who’d combine to score more than 30 percent of the team’s goals in its inaugural season.

There were Huger and Olivia Fernandez, defenders who would soon be tasked with containing some of the Atlantic Coast Conference’s — and the nation’s — best attackers thanks to a high-level schedule assembled by Hexter.

And there was Rachel Ramirez, the goalie who also played volleyball in high school, who would go on to rank in the top 10 nationally in saves and be Elon’s stronghold between the pipes for her entire four years.

“We had a bunch of players who wanted to lay a foundation for a brand-new program,” Hexter said. “Win or lose, they wanted to set the foundation for how we were going to be four, five, 10 years from then. I’m really proud of how they’ve done that.”

That year, they never talked about being young, never acknowledged the levels of newness oozing around the program and didn’t make excuses for being the underdog.

In fact, they embraced it. The 22 freshmen and four upperclassmen on that team all learned how to be leaders on the fly, and that’s led a wealth of success they’ve experienced.

The first game wasn’t pretty — a 25-4 loss to No. 6 Duke, where Hexter coached for eight years before arriving at Elon — but before long, Elon would be competing with some of the nation’s best.

The Phoenix bested Duke 7-6 in February 2016, the program’s third year of existence. And this year, Elon has knocked off both University of Virginia and Virginia Tech.

They hold a career record of 36-29, posting a better mark each year.

“Each year, we’ve been able to make these strides,” Kessler said. “I feel like our program has matched what Josh’s vision was. It’s something that’s really special to see, how he envisioned that and how our program is following that.”

Hexter says time will tell how this group of 11 seniors will be remembered and how their impact transcended the program.

But at the core, they’ve fostered a competitive culture and a healthy team chemistry that sets them apart.

“They’ve had to learn how to be leaders all four years,” Hexter said. “They were able to bring in these younger classes, and not just allow them to be leaders, but teach the younger kids how to step up. That’s made a difference.

“It takes a really unselfish person to be able to do that. Their unselfishness and drive to be great is what I’ll remember most.”

They’ll be honored after Sunday’s game against Hofstra University at Rudd Field, a crucial game for locking up a spot in the CAA Tournament.

The top four teams in the CAA make the tournament, which offers the lucrative automatic bid to the NCAA Tournament to its winner. Elon currently sits in a three-way tie for third, and a victory against the Pride would give the Phoenix some leverage heading into a regular-season-ending game at last-place College of William & Mary.

When the senior class committed to Elon, there was no product on the field to evaluate.

So as they take stock of the successes, relationships and accolades garnered over the past four years, they’re confident that the mark they’ve left on the program is one to be proud of.

“We’ve all come together so close because we did lay those bricks down,” Huger said. “We were the ones who had to figure out what the Elon way was going to be so we could set that tone.

“It’s going to be really special to come back later down the road and see it all coming together and to know that we started this.”