Elon falls to West Virginia in 1st round of NCAA Tournament 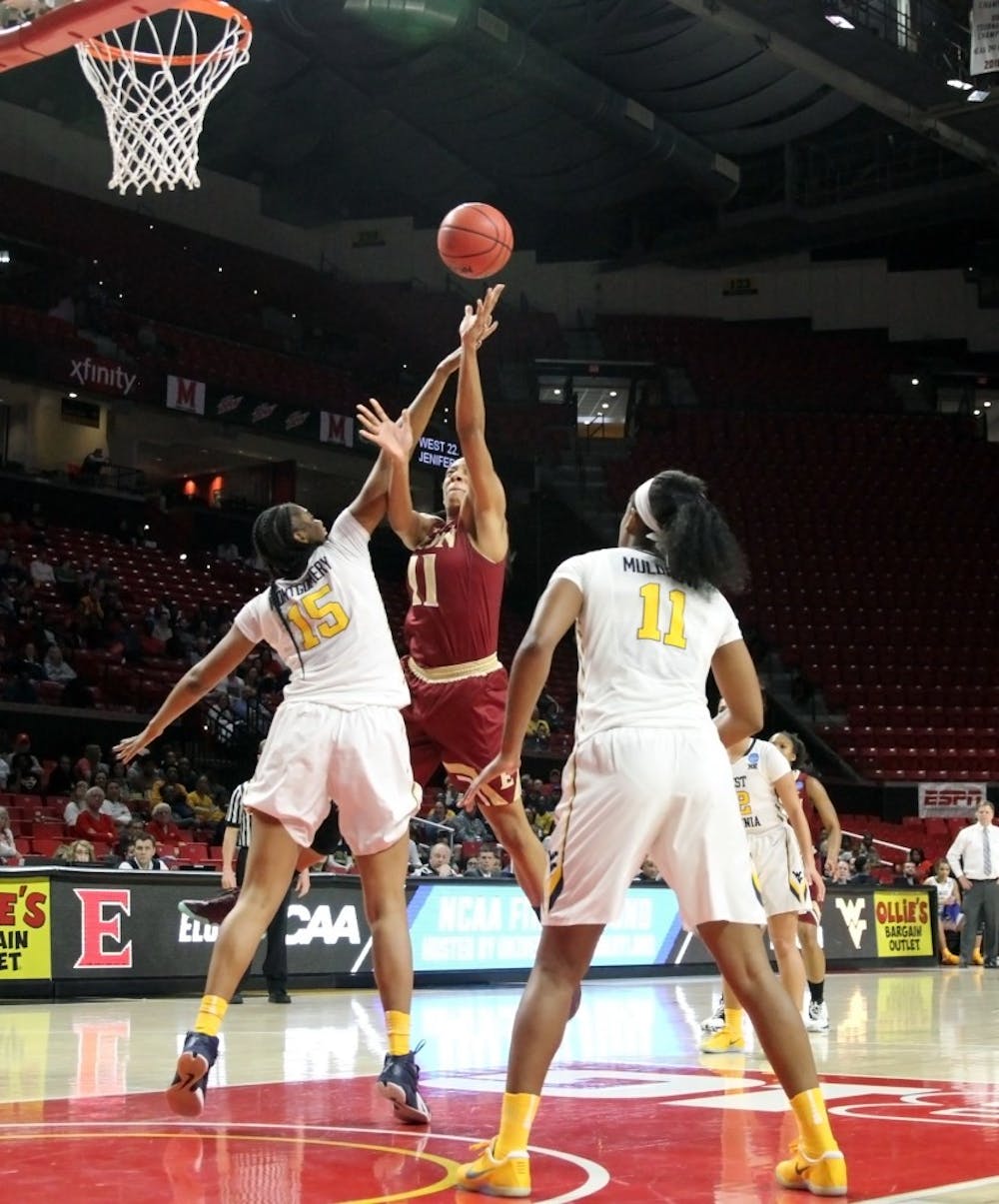 COLLEGE PARK, Md. — The Elon University women’s basketball team saw its best season come to an end in the first round of the NCAA Tournament as the Phoenix lost to West Virginia University 75-62 Friday afternoon in College Park, Maryland.

The 11th-seeded Phoenix battled the sixth-seeded Mountaineers tough throughout, holding a three-point lead late in the third quarter and tying the game at 53 with 7:25 to go. But West Virginia took a 10-0 run after the tying basket, putting the game away for good.

For head coach Charlotte Smith, the toughest part of the loss was seeing her seniors — who she said build the foundation for this program — in tears as the game ended.

“Initially, it was heartbreaking,” Smith said. “I wanted it so much for the seniors and this team because they poured so much into this program the last four years. I felt like this was a team that could definitely make a deep run into the tournament, and unfortunately, we’re having to go home.

“I can’t be more proud of this senior class and everything that they’ve done. This is one of the most selfless classes that I’ve ever coached. Their roles changed throughout the years, from starter to non-starter, and they never complained and did whatever it took for this team to be successful and to win.”

Elon came out of the gates quickly and held a 13-10 lead after a quarter. But the Phoenix struggled in the second quarter, making just 3-of-17 shots and allowing West Virginia to take a 28-27 lead into half.

Then in the second half, Elon wasn’t able to stop West Virginia, as the Mountaineers made 16-of-26 shots from the field. The Phoenix kept up in the third quarter, but struggled to find the net in the fourth, only making three baskets after senior guard Lauren Brown hit the tying 3-pointer with 7:25 left.

Burnett led Elon with 19 points and Brown added 17. Junior forward Malaya Johnson chipped in 10 points and seven rebounds and felt that Elon could be proud of its performance on the day.

“We had a great group of girls this year,” Johnson said. ”I love every single one of my teammates, and I think it was just the feeling of knowing that we worked so hard for so long and we didn’t get as far as we wanted to. Like the coaches have said, we’ve done some amazing things this season and we have absolutely no reason to hang out our heads. We played hard, we fought, and we all wanted it. We’re passionate, and it hurts.”

The loss means Elon’s season ends with a 27-7 record, the most wins in the Division I era and second-most in program history after Elon went 29-5 in 1981-82. Brown expressed gratitude for her time at the school.

“I’m very proud of my team, my coaches, and this season,” Brown said. “There’s no other team I’d rather be on. It’s been a great journey.”

For senior guard Essence Baucom, who fouled out with eight points and was crying in Smith’s arms as she walked off the court, the passion Elon played with shines brighter than the result.

“Obviously, if you look at film, there’s a lot of things we could’ve done differently to get a different result,” Baucom said. “But overall, I’m proud of my team, proud of the effort they gave, and proud to represent Elon.”

Smith called the game a “tough pill to swallow,” but felt that her team did a good job of representing itself and Elon on a national stage.

“I’m incredibly proud of this team,” Smith said. “A lot of times, when we go around, people are like, ‘Where’s that?’ We wanted to change that, and I feel like we brought Elon athletics out of obscurity and into destiny. Hopefully, people will know where Elon is now.”