With regular season championship in tow, Elon hunts for bigger prize in Harrisonburg 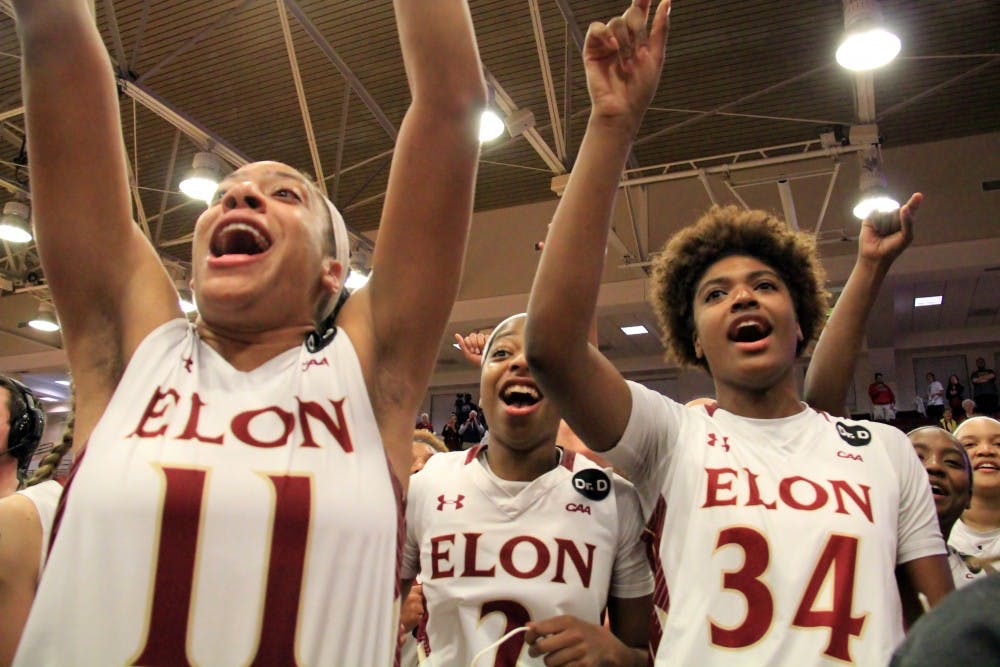 The tears had started to stream down senior forward Jenifer Rhodes’ face.

In what could be her final game in Alumni Gym, Rhodes had tied her career-high with 21 points, leading Elon to a 82-48 win over the University of North Carolina at Wilmington March 1 and, with it, the Colonial Athletic Association (CAA) regular season title.

That title, and all the work that was put in to get it, had Rhodes emotional. But Rhodes said she quickly stopped the tears because there is still work to be done.

“I was just so happy and so proud of my teammates, and also a little somber because it’s the last time I’ll be in this gym,” Rhodes said. “But to know that next week, we have to get it done because we’re not done. That’s why I was able to hold back the tears, because I was like, ‘It’s not over, we’re not done. There’s still business to take care of.’”

The CAA Tournament is that business, with Elon heading to Harrisonburg, Virginia and host James Madison University’s gym as the No. 1 seed. The Phoenix will begin its title quest at noon Thursday against the winner of the 8/9 matchup of Towson University and Hofstra University. And, for head coach and CAA Coach of the Year Charlotte Smith, the team is ready to add to its trophy collection for 2016-2017.

“The telltale story will be how they come out and play, but I know they are definitely hungry for more,” Smith said. “This is just one chapter of being a champion — there’s more to the story and a bigger part of the story is conference champions, because that defines whether or not you’ll be in the Big Dance, for the most part.”

Elon can assure its first bid to the NCAA Tournament by winning three games in a row. But while acknowledging it’d be “miraculous” if Elon got an at-large bid, Smith feels the Phoenix deserves to be in consideration.

“We played a very challenging nonconference schedule, and we have a great nonconference record,” Smith said. “We were really competitive, and a couple of those games were in our grasp to take the W. We’ll see, but playing those games gave our team a lot of confidence. We’ve proven that we can hang with tough competition, which I think will make a great case for an at-large bid.”

By the time the Phoenix plays its first game at the CAA Tournament, it’ll have been three months since Elon lost to a non-James Madison opponent. Elon’s RPI has consistently been in the Top 30 all season and currently is at 27, something Smith says comes from the players grasping the importance of each game.

Smith believes all of that can be attributed to her five-woman senior class: Rhodes, who was selected to the All-CAA Third Team and guards Essence Baucom, Lauren Brown, Maddie McCallie and Lenaira Ruffin. In the coach’s eyes, the word that embodies the group is “selfless.”

“Our senior class is the foundation of this program, and they are the ones that have built what exactly it means to be a team,” Smith said. “Lauren Brown was a starter her freshman year, and Maddie McCallie was a starter last year. Both have gone from a starter to a nonstarter, so their roles have changed [at times], but their attitude hasn’t. They’ve always been positive and been mindful of the greater good of the team, and that’s been one of the biggest keys to our success.”

“Shay is one of the most selfless people on the team — almost to a fault at times, because there are times where I want her to be more aggressive and I want her to look for her shot,” Smith said. “Malaya’s the same way. That core group, the core seven, is just selfless, and they’ve been a great example for those to come of what it takes to build a championship team.”

Elon has that championship now, but the only way Elon can guarantee its spot in the NCAA Tournament and achieve its larger ambition is to win the conference tournament. It's what Brown, who was named the Dean Ehlers Recipient, an award from the CAA given to the women's basketball player who "embodies the highest standards of leadership, integrity and sportsmanship in conjunction with his academic athletic achievement," has always wanted.

“Don’t get me wrong, we’re so excited about the championship, but our goal is to win our conference tournament,” Brown said. “This is nice to have, but this is not our ultimate goal. Just staying focused on what we want to accomplish this year will be key for our success.”

And, while the path to getting there may mean Elon has to beat James Madison in its building Saturday night, the sixth-year head coach and first-time Coach of the Year trusts in her team to get it done.