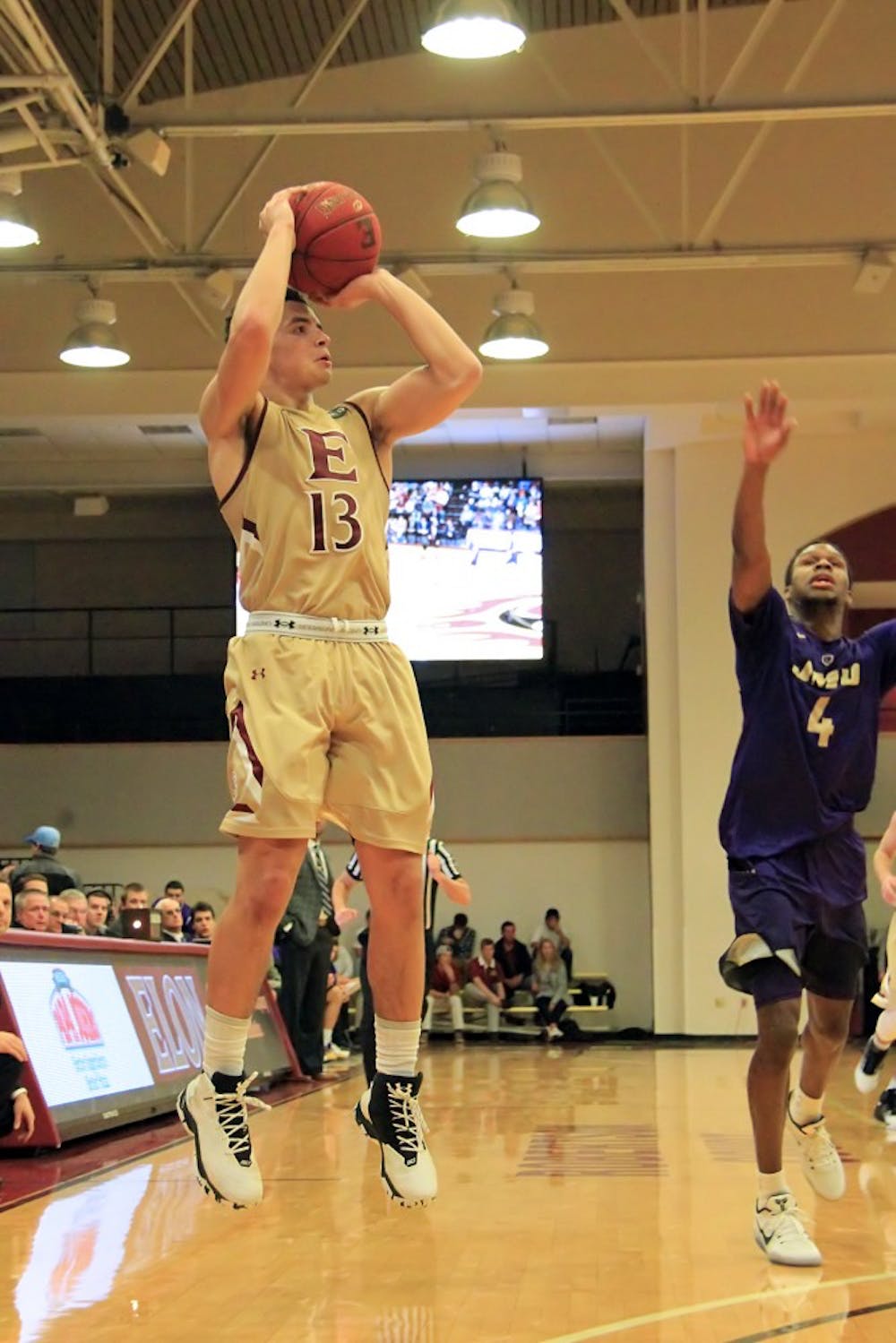 It’s been less than two years since sophomore guard Dainan Swoope got a scholarship offer from the Elon University men’s basketball team.

Since then, he’s gone from not even knowing what Elon was to becoming one of the Phoenix’s most dependable players and big shot-makers, a quick rise that even surprises him.

“Honestly, I never saw this coming this early,” Swoope said.

And as the Phoenix heads to the Colonial Athletic Association (CAA) Tournament in Charleston, South Carolina, Swoope’s late-game heroics almost certainly will be needed if Elon wants to accomplish its — and Swoope’s — dream: the school’s first trip to the NCAA Tournament.

Elon wasn’t supposed to have Swoope on the team in 2015-2016. But fate has a funny way of working things out.

In 2015, its first season in the CAA, Elon had two point guards: sophomore Luke Eddy and freshman Elijah Bryant. But Eddy went down with a torn ACL toward the end of nonconference play, leaving Elon reliant on its freshman. Bryant shone, averaging a team-high 14.2 points and earning CAA Rookie of the Year honors.

But in late June, Bryant shocked Elon by asking for his release so he could transfer to Brigham Young University — leaving Elon with a need for a point guard but too late to recruit players intending on starting college just two months later. Head coach Matt Matheny and the Elon staff switched its focus, looking at players who had completed four years of high school but had intentions of going to a prep school for a year.

“We were in a ‘right now’ situation,” Matheny said. “We were recruiting different guys, so we had had the conversation with other guys before, ‘Hey, even though you’re thinking about prep school, would you consider right now?’ It was a pretty easy question for us to ask, because if he wouldn’t have wanted to come now, we still would’ve recruited him.”

Swoope had played for two seasons at Sunrise Christian Academy in Wichita, Kansas — 180 miles from his hometown of Overland Park — and intended on a third. But Swoope caught Elon’s eye at the Peach Jam, a prestigious summer tournament for recruiting purposes.

“The gym’s full, and there’s great players in the gym, and there’s college coaches by the hundreds watching this game,” Matheny recalled. “Dainan made five threes in the first five minutes of the game. That’s when we were convinced that he was the guy to recruit for us.”

Elon offered Swoope after the mid-July showcase, with Matheny telling Swoope the scholarship was good for either 2015 or 2016. Swoope made his decision quickly and easily, seeing the opportunity to get minutes early as reason to commit to Elon Aug. 10.

“It was just me breaking it down, wanting to be able to play my first year,” Swoope said. “That was a big thing — wherever I wanted to go, I wanted to play that year. Elon was a perfect spot for me.”

A boom in confidence

After arriving on campus less than three weeks after committing and signing with the Phoenix, Swoope quickly acclimated to Elon and found plenty of playing time, averaging 22.3 minutes per game in 2015-2016.

Swoope’s offensive prowess showed immediately, scoring double-digit points in each of the first nine games. But as the season went on, Swoope’s numbers waned, dipping into single digits for the first four conference games.

But then, with Elon down by two at the College of Charleston Jan. 16 with less than a minute left, Swoope hit a 3-pointer on a kickout from his classmate, forward Tyler Seibring, with 20 seconds left. Elon would hold the Cougars on the next possession to get the win.

Matheny now sees the clutch shot as a sign of the bravado that’s matured since.

“He’s got great confidence, and it’s a growing confidence, and there’s room for more growth,” Matheny said. “It’s hard to just immediately translate that into your first year, but you could see it bubbling last year. And now, he’s just playing with the same exact confidence we saw in him in the recruiting process.”

This season, after stepping into the starting lineup when Eddy had another injury flare-up in mid-December, Swoope has taken off, scoring 13.1 points in conference play in a team-high 35.1 minutes. Swoope plays off the ball when on the court together with Eddy, allowing more chances for Swoope to be ready to catch-and-shoot without hesitation.

And, with no fear and all assurance, Swoope fired and hit shots that clinched Elon victories three times in a three-week span all in Alumni Gym.

Feb. 2 against James Madison University: After the Dukes tied the game at 59 with 2:08 left, Swoope hit a 3-pointer in front of the Elon bench seven seconds later that put Elon on top for good in a 67-61 win.

Feb. 12 against the University of North Carolina at Wilmington: The Seahawks took a 74-72 lead on a 3-pointer from graduate senior guard Ambrose Mosley with 2:21 left, but Swoope responded on the next possession by nailing from way behind the 3-point line in Mosley’s face, giving Elon the lead en route to a 77-76 win.

After the third game-winner of 2017, it was clear how much faith Swoope’s teammates had in him.

“He’s a confident fella, and we have confidence in him,” Seibring said Feb. 12. “He took that shot, and I threw it to him, and I was hoping he was going to take it. That guy, he was there, but when they score, the way our offense works, we want to respond quickly. A confident shot like that, it’s gonna go in in the friendly confines.”

Redshirt junior forward Brian Dawkins added, “Dainan is comfortable taking those shots. I don’t think there’s any moment he shies away from. He’s been big for us, and we know he’s willing to take those shots, and to have that confidence and be able to make it is big for us. It’s good to have him like that, and it’s good that he’s willing to take it and keep making them. I’m glad he keeps shooting.”

Just like every basketball-playing kid growing up, Swoope dreamed of playing in the NCAA Tournament, thinking he’d want to take the game-winning shot.

But unlike most, Swoope grew up next door to Will Spradling, a guard who played at Kansas State University (2010-2014). The Wildcats went to the tournament each year Spradling was in Manhattan, Kansas, returning to Overland Park and regaling a high-school-aged Swoope with fodder for his dreams.

“Just going to the NCAA Tournament has always been a huge goal of mine, and it’s been a dream since watching my neighbor,” Swoope said. “When he talked about it to me, it sounded like it would be a once-in-a-lifetime experience. I want to do it so bad, and I can’t wait to make it happen.”

And with the Phoenix reaching the 10-win plateau for the first time in the CAA, Swoope and the rest of the team feel like they could be in for an extended stay in Charleston.

“Of course it’s a goal to get to the Big Dance — it would be unreal,” Swoope said. “Everybody’s playing with confidence and having fun out there, believing in each other. With the wins coming, it builds us up even more. I can’t wait for the conference tournament.”

And should Elon be playing Monday night, with the game close in the waning moments and a championship on the line, Swoope is going to be ready to shoot. And after watching him hit four clutch shots in his two seasons on campus, Matheny would love for Swoope to take that shot, too.

“It’d be great,” Matheny said. “We have a ton of confidence in him to take any shot.”