Bodenarain's election seen as a spark toward diversifying campus 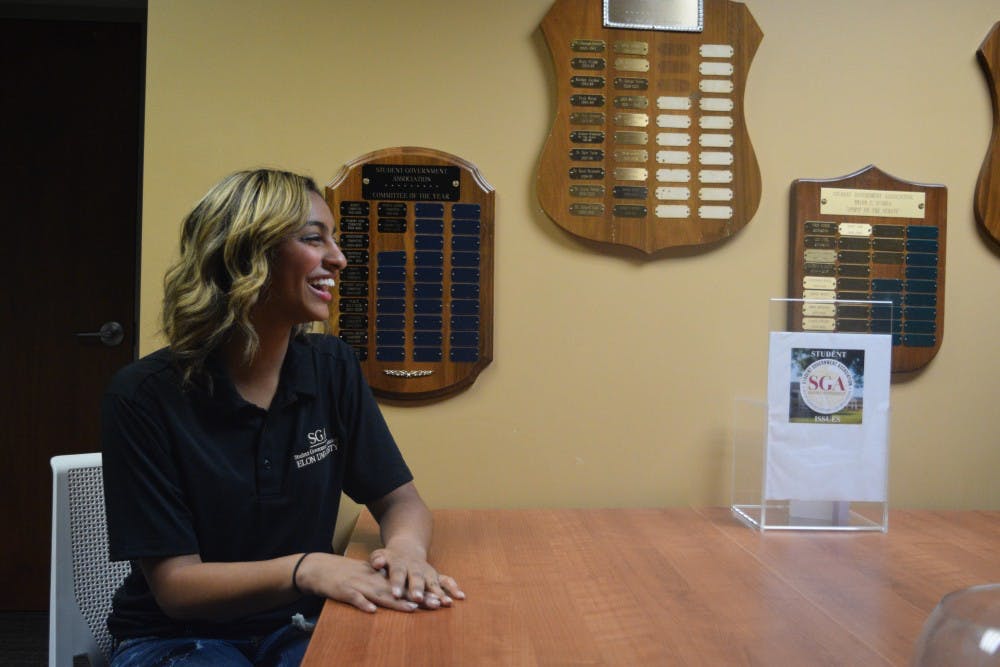 As a black student, freshman Frederick Evans said his transition to college has had pockets of instability.

Being outnumbered by more than 80 percent of the population intimidated Evans at first, but as the year progressed, he’s adjusted to the environment. Without the help of upperclassmen mentors, he wouldn’t have as firm of a grasp on life at Elon University as he does now.

When he learned junior Morgan Bodenarain was elected SGA executive president last week, he was ecstatic. With a black student representing him, Evans said it’s a sign that the university is shifting toward a more inclusive environment.

With his class mate Class of 2020 President Livi Murray and former Class of 2019 President Kenneth Brown both being black, Evans said the future is promising.

To him, it shows that the student body is evolving to look more like him. Bodenarain’s election was the spark Elon needed.

“It makes me feel proud that we were able to come together and elect her,” Evans said. “My mom is a black woman, and black women are some of the strongest people on this Earth. I think Morgan will be able to give this campus the voice that it needs.”

Evans doesn’t remember much about his second day on campus as a student — except that it was hot.

The words senior and current SGA Executive President Kyle Porro said at New Student Convocation that day have since faded to Evans. Porro also admitted he doesn’t recall most of the speech but will always remember speaking to the freshman class. It’s an opportunity all student body presidents share. In August, it will be Bodenarian’s turn, which Porro said will be a monumental day for the Class of 2021.

Bodenarain is the sixth black person to serve as student body president, but only the second black woman to do so. The first was Akilah Weaver in 2000. For the freshmen sitting where Evans was a few months ago, Porro said seeing a woman of color will be an uplifting feat. By simply stepping to the microphone, Bodenarain will make a potent statement before she even begins her speech.

“I think it shows where the school is going,” Porro said. “The SGA president is the first person to greet you at convocation as a first-year student. Next year, Morgan will be up there. For a minority student to see that, it shows that the school is beginning to represent you. I think that is powerful.”

"The SGA president is the first person to greet you at convocation as a first-year student. Next year, Morgan will be up there. For a minority student to see that, it shows that the school is beginning to represent you. I think that is powerful.”

Bodenarain said her situation was identical to Evans’ when she first arrived as a student. Like many, she was struck by the lack of diversity on campus, by the 15.9 percent freshman minority admissions rate in 2013-2014 — her first academic year. Because she experienced the struggle firsthand, she has an added motivation to help those who need it.

“Having a hard time myself translating to college was one thing that made me more passionate about inclusivity,” Bodenarain said. “I was trying to find myself like everyone else during freshman year. Now that I’m in this position, I want to make sure that every Elon student has the tools they need and that this process will be as seamless as possible.”

Because of her perspective, Bodenarain said she is prepared to tackle the problems her school faces regarding inclusivity.

Because she is now executive president, Bodenarain won’t be as involved in SICC. But she said that she’ll be as close to the committee as possible to offer her input and insight.

These are one of the many ways she hopes the student body can see SGA attempting to resemble everyone.

“Even though some people may think SGA doesn’t represent them, I hope they see that we are trying to do our best, because this is the only senate that we have,” Bodenarain said. “And now I feel like it’s ‘grind time’ — we have to be representing our constituents. The best way to face this issue is with love, and I feel like that is going to come from unifying our campus and respecting each other’s differences.”

While Elon is striving to become more inclusive, Bodenarain knows that others may not share the same mindset. Two days before she was elected, a freshman student draped the confederate flag on his Sloan window. She said she wants to represent everyone, but it comes with a caveat.

In the past, Bodenarain has been vocal about things she feels are oppressive. Most notably, she helped draft a resolution in defiance of House Bill 2 last April. When she feels it appropriate, Bodenarain said she may oppose some students who support causes that blatantly contradict her morals.

“I was elected based off of my ideals and my ideology, and I want to take into account all of the different viewpoints everyone has on this campus,” Bodenarain said. “But with that in mind I will base decisions not only on what best represents my constituents but also what I think right, especially on controversial things like this.”

Junior Spencer Wagner, Class of 2018 senator, agreed. He is one of Bodenarain’s closest friends and a driving force for her during her campaign. He said he hopes her election will be a wake-up call to campus. Acknowledging that while he is not a minority, he said he empathizes with minority students and wants to help in any way he can. He said Bodenarain is the person to lead.

“I fit right into the majority of campus — white straight male, upper middle class — and I hope a lot of students begin to see their privilege through that and where they fall in,” Wagner said. “There is a large majority on campus who don’t recognize it. Hopefully Morgan’s election will be a breath of fresh air.”

With Bodenarain as executive president, Wagner said he is excited to get to work to help Elon become more inclusive.

“This is something I really want to help with and work on so students feel like they have organizations that they’re a part of and have a campus that they can call home,” Wagner said. “This isn’t something that can be fixed over one SGA term — its going to be a long process. But it’s a matter of having a student push so that students feel included and more represents who they are.

“It’s been a long time coming and I’m really glad that Morgan will be able to fill in one of those roles. She’s very deserving of it.”

Bodenarain said she became emotional when she first realized the select company she was in. Now that she can truly appreciate the significance, she said she’ll constantly work to improve Elon’s racial climate.

She said she is glad to be a part of it.

“Change doesn’t happen in a day, it’s a constant pecking at the status quo until it cracks. I’m really happy to be in this position, and I want to do the best I can."

“Change doesn’t happen in a day, Bodenarain said. “It’s a constant pecking at the status quo until it cracks. I’m really happy to be in this position, and I want to do the best I can.”