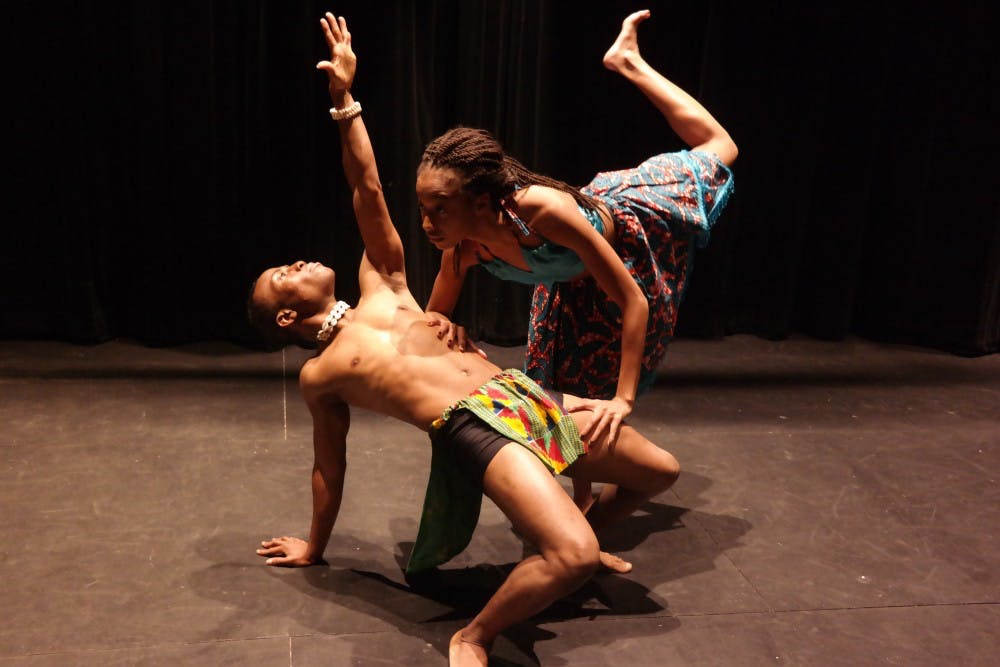 Students rehearse a dance number for “Senzenina,” which tells the story of apartheid. Photo courtesy of Jason Aryeh.

Through dancing, singing and speaking, the struggles of racial segregation and apartheid in South Africa mirrors current incidents of inequality that the black community in the United States faces today.

At 7:30 p.m. on Feb. 27 in McCrary Theatre, the Elon University Department of performing arts will present “Senzenina,” a multimedia performance intended to commemorate Black History Month.

“I try to bring reality and what is happening now to what we are remembering,” said Jason Aryeh, the director and choreographer.

To make history relevant today, the production expands the word “Senzenina,” which means “What have we done?” and attempts to determine what to do now.

Throughout the black South Africans’ struggle for equality, these individuals would constantly ask themselves, what have we done? Addressing this question in a new context and time period, Aryeh said he hopes the audience members will ask themselves what they can do now to make permanent strides toward freedom and creating a more unified community.

Aryeh intends for “Senzenina” to present a series of additional thought-provoking questions about why there is still discrimination today. Through artistic expression, the performance will examine why different racial and ethnic groups lack familiarity about one another, why discussing racial and ethnic differences is an uncomfortable topic and how each group can understand one another better.

“These are questions that I am not seeking answers to, but I’m dancing and coming up with movements that address them,” Aryeh said.

After the audience ponders these questions, Aryeh said he wants members of the Elon community to come up with solutions, take action to create a community that celebrates diversity and enables the black community to feel accepted.

“Senzenina” further explores these themes in regard to the performers themselves.

Even though the Department of performing arts is hosting the show, the performers are not just limited to dance and performing arts majors. Students from all over campus with a variety of interests and majors are participating in the production.

With more than 50 students involved, for some, this is their first time performing.

“It’s not just my work,” Aryeh said. “I’m also bringing in students all across campus. It’s to bring the community together so that we can all celebrate and remember the events of Black History Month.”

Since the black community is underrepresented in the Elon dance program, Aryeh said that as a member and a citizen of Ghana, South Africa, he decided to contribute. He will be performing a duet with freshman Maxwell O’Connell.

This duet is an abstract dance that does not follow a specific storyline or plot. Instead, the dance revolves around themes of community, understanding and freedom for all people.

“It’s not just a call for a specific minority,” O’Connell said. “It’s a call in general for freedom and justice that we are currently not finding.”

Junior Kellcee Batchelor, will be performing a song in “Senzenina” called “Nobody.” As a music production major, Batchelor combined his passion for hip-hop and rap with this musical composition.

Batchelor focused on the brutality of apartheid within this original piece and explored the question of whether members of the black community are still “nobodies” in the United States today.

“Our history is brutal yet beautiful,” Batchelor said. “And that’s what my performance will be: brutal and beautiful. I want the audience to internally examine themselves and not the person sitting next to them.”

Though apartheid is the main focus of the show, “Senzenina” examines segregation long before apartheid beginning with the 1913 Land Act, where black individuals were forced into reserves and prohibited from working as sharecroppers.

Then, in 1948, apartheid began and nonwhite South Africans were separated from white individuals in all aspects of their lives until it ended in 1994.

The singing, dancing and speaking in “Senzenina” all attempt to capture the essence of apartheid and reveal the transition from grief and struggle to joy and hope for a peaceful future.

Aryeh has been researching apartheid since the end of last year’s Black History Month performance. Based on his findings, Aryeh said the research inspired his overall vision for the production, the pieces he choreographed and the spoken word he composed.

“There was nothing here during Black History Month, and Elon always strives to make diversity on campus, so I thought it would be a great way to remember some of the historical black events,” Aryeh said.

Aryeh said he is excited to watch the performers’ hard work pay off and for all of the viewers to watch a production in which everyone is represented and accepted.

“I want them to experience a lot,” Aryeh said. “I want them to think. I want them to leave the auditorium with questions. That’s why we make art — to make the community think. They will either create their own answers or go out and feel the need to see possible ways to make things better.”