Lambert, who guided Elon from college to university and small regional school to mid-size national school, will stay on staff in an auxiliary role 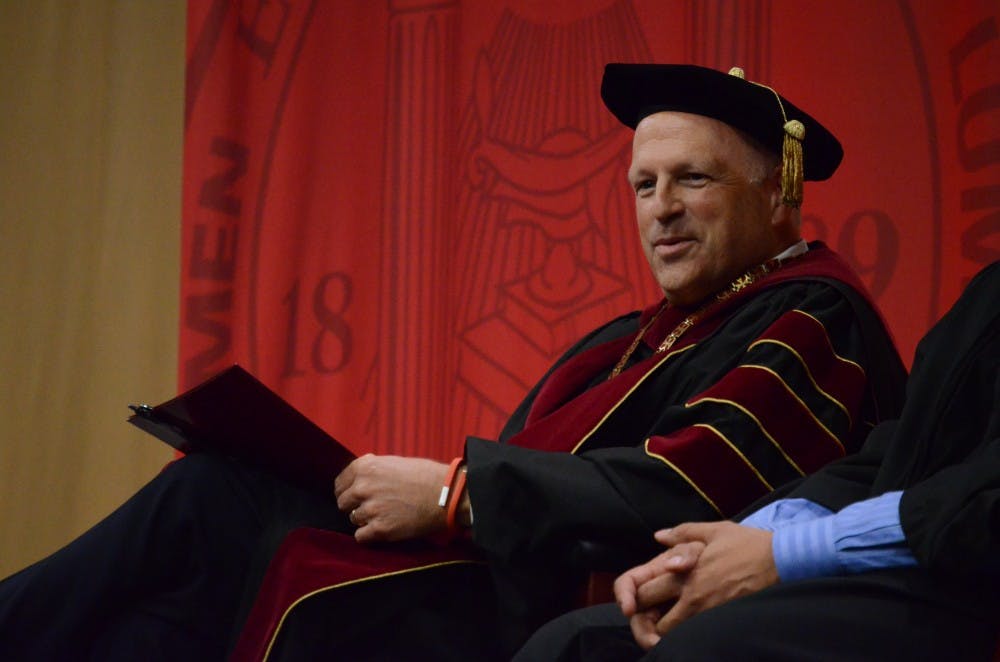 
After serving as President for more than 18 years, President Lambert has announced that he is stepping down.

Leo Lambert is stepping down as president of Elon University, the school announced Monday morning.

Lambert told the Board of Trustees at its spring meeting that he’ll be transitioning to a new role. The Board will begin a national search for his successor immediately.

Once the new president is hired, Lambert will take a sabbatical year then return in a president emeritus and professor role to support the advancement and alumni engagement offices.

Lambert’s transition comes as Elon looks ahead to its future. The university is set to publicly launch the Elon Leads fundraising campaign in 2018, and a new leadership will be in place to guide the school during that.

Lambert, the influential figure who guided Elon from college to university, from Fightin’ Christians to Phoenix, from small regional school to mid-size national school, will stay in office until a new president is in place.

Lambert, 61, was named eighth president of Elon College in 1999, succeeding Fred Young. By 2001, Elon College had become Elon University and the first of two strategic plans Lambert would oversee was implemented.

Since Lambert arrived, Elon has established its School of Law and the School of Health Sciences, and restructured Elon’s academics to create the School of Communications, the School of Education and Elon College, the College of Arts and Sciences.

He led the creation of the NewCentury@Elon and Elon Commitment strategic plans, as well as overseeing the completion of the Ever Elon Campaign, which raised $107.3 million.

Among the prime initiatives that Lambert has promoted are Study Abroad, undergraduate research, the residential campus and civic engagement.

Lambert helped create the Elon Academy, which launched in 2007 as an enrichment program for academically talented high school students in the Alamance-Burlington School System who have financial need or no family history of college attendance.

Elon’s campus has grown drastically under Lambert’s tenure. More than 100 buildings, including the Station at Mill Point, the Global Neighborhood, Colonnades Neighborhood, the Koury Business Center, the Academic Village and Belk Library, Inman Admissions Building and Schar Hall, have been erected or acquired under Lambert’s watch.

Lambert has helped guide Elon to new levels of athletic success and competition. As the mascot changed from Fightin’ Christians to Phoenix, Elon completed its transition from Division II to a full-time Division I program and member of the Big South Conference.

After four years in the Big South, Elon moved to the Southern Conference. And, most recently, in 2014, Elon became a member of the Colonial Athletic Association.

Nationally, Lambert has served on the Board of Directors for a number of organizations, like the American Council on Education and National Association of Independent Colleges and Universities.

Prior coming to Elon, Lambert was provost and vice chancellor for academic affairs at University of Wisconsin-La Crosse.