Dmitri Thompson scored 22 points for Elon, which will face William & Mary to start the CAA Tournament. 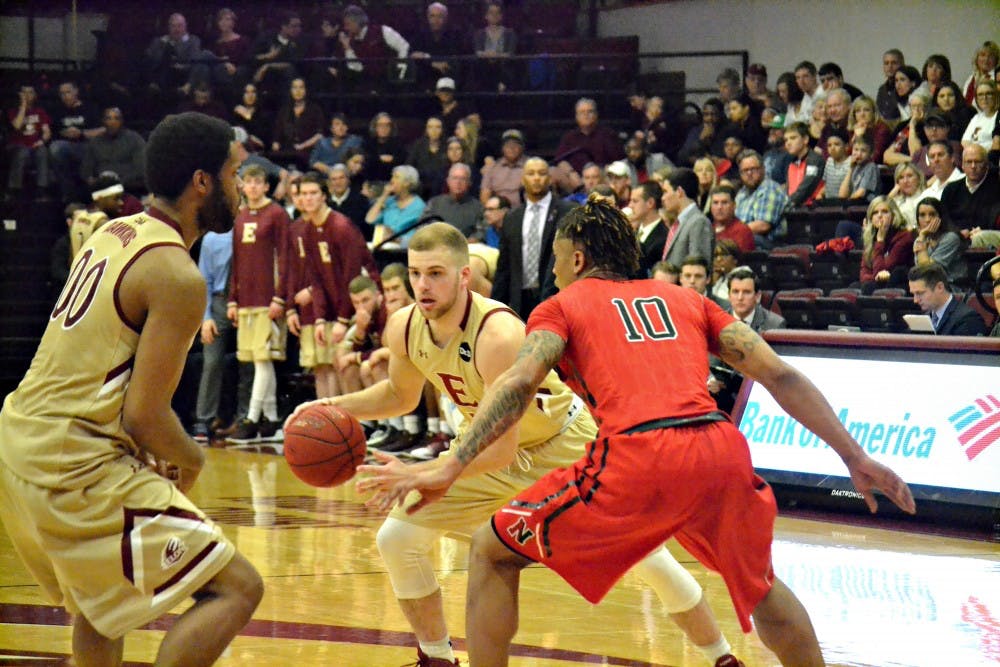 The finish was just how head coach Matt Matheny and the Elon University men’s basketball team could’ve drawn it up, sending its seniors off in style and completing the best season of its young Colonial Athletic Association (CAA) tenure.

Elon thumped University of Delaware 81-59 to end the regular season Saturday night at Alumni Gym, a performance rife with positives as the Phoenix produced its largest margin of victory in CAA action this year.

Then, with Elon up 20 in the last three minutes, there they were back on the court, putting the finishing touches on a fourth-place finish in the CAA and Elon’s best record through three seasons in the league.

“That’s the goal,” said junior guard Dmitri Thompson. “Pat and Ryder, they work their butts off in practice every single day. I honestly don’t know how they do it. They make us better every single day.”

And on this day, Thompson scored 22 points, sophomore guard Dainan Swoope added 14 and sophomore guard Steven Santa Ana chipped in 10 for Elon, which will be the No. 5 seed in next week’s CAA Tournament after a tiebreaker.

“I thought it was a great senior night,” Matheny said. “I thought we were really aggressive offensively. Even though we lost round one, I thought our seniors set the tone. That’s what we asked them to do.”

Elon took its first lead midway through the first half with 3-pointers by Santa Ana and Swoope.

Elon would score on 12 of its last 19 possessions of the first half.

That’d prove to be the turning point. Elon maintained a double-digit advantage for nearly all the second half, with Thompson driving to create opportunities and freeing up the rest of Elon’s weapons.

“If everybody’s shooting with confidence, eventually they’ll fall,” Swoope said. “When we hit those spurts, everybody feeds off each other. Everybody keeps shooting. We were taking advantage of what the momentum is doing for us. It was good for us tonight. It put us ahead a little bit, and we kept going from there.”

The victory, which avenges an overtime loss suffered at Delaware earlier this month, sets Elon up for a matchup with No. 4 College of William & Mary at 2:30 p.m. March 4 in Charleston, South Carolina.

The team that started CAA play with three straight losses has now equaled its most victories in the four seasons.

“We’re ready,” Thompson said. “We had a great schedule. We were put to the test a lot. We had challenges, but we overcame most of those challenges.

“We’ve been playing pretty well lately. I feel like we have what it takes to make a run.”