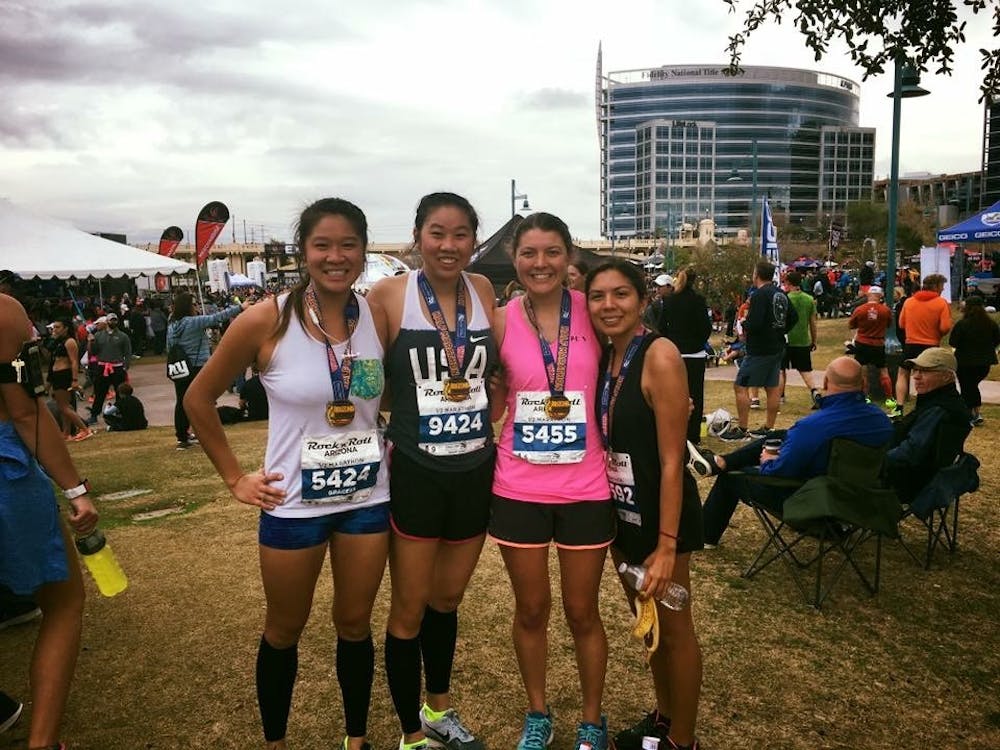 Upon crossing the finish line of her first marathon at age 17, Haley Ghelfi felt a mixture of exhilaration and disbelief. She gazed back at the trail, contemplating her long, 26.2-mile journey she had just completed and felt pure bliss.

“I couldn’t even imagine going that far until I did it,” Ghelfi said. “I had such happiness for finishing. At the end of the race, I just wanted to cry.”

Now Ghelfi, a recent Elon University alumna who graduated in December 2016, has completed nine marathons and 20 half marathons.

Adding to her list of races, Ghelfi is training for her first 50K race, a distance of 31 miles. Taking place in July in Ashland, Oregon, the race will consist of countless inclines, steep hills and additional mileage. Ghelfi is preparing herself mentally and physically for this upcoming challenge and adventure.

Preparing for the big race

In anticipation of this approaching race, Ghelfi will spend about four months training. Since she has already built up the endurance for long-distance running, Ghelfi will dedicate long runs to Sundays. She said she plans on starting at 12 miles and then building up to 25 miles throughout these months.

On the weekdays, Ghelfi will still incorporate running into her schedule but at a more moderate distance. In addition to training for speed, she will focus on yoga to stretch out her body and aid in recovery as well as strength training to increase her overall strength and fitness level.

Growing up in Redding, California, Ghelfi has always been a runner. At age 5, she completed her first 5K race, and since then, has been training for races of all durations.

Since she was raised in a family that has a passion for running, Ghelfi likewise adopted that profound desire to run. Her mother, father and three siblings have always been runners, so she decided to follow in their footsteps.

Not only did Ghelfi’s family introduce her to her favorite hobby, but they are also one of the main reasons why she has remained committed to running. Offering guidance and support, Ghelfi’s family has contributed to her biggest accomplishments. By running for long periods of time with her family members, Ghelfi has deepened her relationships with them.

Ghelfi’s older sister — Katie Ghelfi-Dunbar, who is currently pursuing her doctorate in clinical psychology — has run around 50 races with her. The sisters are currently training together for the upcoming 50K race, and they spend their weekends running on the trails alongside one another.

Through this training process, Ghelfi-Dunbar expressed her confidence that Ghelfi will complete this race with effortless agility and optimism.

“Haley is so motivated,” Ghelfi-Dunbar said. “She’ll be happy the whole time during the race. She trains well enough. She will pretty much smile the whole way.”

Ghelfi has also established a closer relationship to her brother Ryan Ghelfi, who owns a running company called Trails and Tarmac. Since Ryan Ghelfi has completed multiple 50K races and ones that consist of up to 100 miles, he serves as a mentor to Ghelfi. She approaches her brother whenever she needs advice, support and assistance.

Ryan Ghelfi likewise explained how Ghelfi has demonstrated commitment to running in preparation for her race in July.

“Haley is one of the most positive people on the planet,” he said. “She makes running such an integral part of her life and everyone around her. Her passion and enthusiasm are infectious.”

Not only did Ghelfi express her gratitude that running has enabled her to develop stronger bonds with her family, but she also said she loves the entire social experience of running races.

“Watching other people and watching them get through the race is probably one of the best times for me,” Ghelfi said. “Even if I don’t know them, I meet people along the way and build really good relationships.”

For Ghelfi, meeting new people that share a passion for running and a common goal of finishing the race is rewarding. In addition to the social benefits, Ghelfi said she races for her own personal goal of growth and development.

The feelings of pride and accomplishment after finishing a run propel her onward and motivate her to continue succeeding.

“For long runs, there is a satisfaction for the distance I complete and an exhaustion I feel for the rest of the day. It’s pretty cool to see how far my body can go,” Ghelfi said.

Though Ghelfi has committed herself to training for races, she explained that finding motivation is not always an easy task.

After graduating Elon with a degree in accounting and international business, Ghelfi began working as an auditor for Moss Adams in Portland, Oregon Jan. 10. She works up to 12 hours a day from Monday to Saturday.

With this busy schedule and little time for leisure, Ghelfi stated that finding time to run has been the biggest obstacle for her during her running career.

Long workdays and cold weather prevent Ghelfi from contributing as much effort and energy as she would like to her runs. Nevertheless, Ghelfi prioritizes exercise and incorporates running into her schedule regardless of the circumstances.

“Right now, Haley is working long days, and if she’s going to run that day, she might run at 10 o’clock at night, but it’s still going to happen. If she has a plan, she’ll stick to it,” Ghelfi-Dunbar said.

In order to motivate herself, Ghelfi reminds herself of the feelings of satisfaction and accomplishment she experiences after long runs.

“Running calms me,” she said. “It helps me focus a lot more. If I run in the morning, I’m more productive for the rest of the day. I’m in a better mood and have more energy.”

To continue experiencing these positive emotions, Ghelfi said her future consists of many more races. She remarked that she plans on running more half marathons and longer races, such as the 50K race. Her ultimate goal is to complete a marathon in every state in the United States.

With these goals in mind, Ghelfi said she views running as more of an experience that enables her to learn more about herself and other people who share the same passion as her.

“I just run for fun for the most part,” she said. “I’m not a competitor in terms of speed. It’s just about getting out there. Races are really good for that and really good for doing them with a bunch of people who are all trying to accomplish similar goals.”