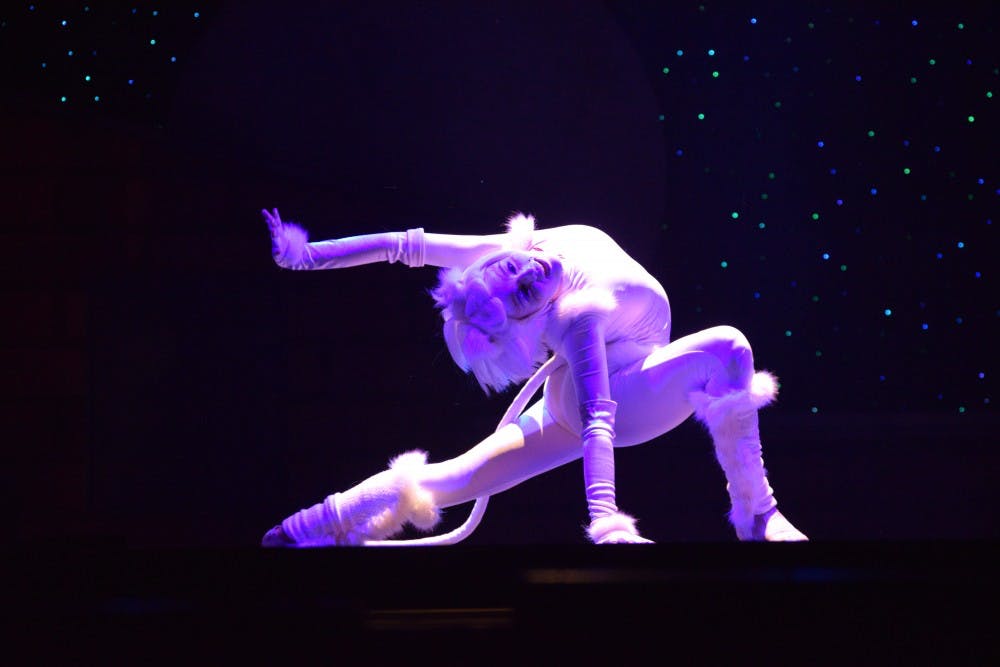 
After four hours and hand-made costumes, the "CATS!" cast is transformed into a band of felines.

The curtain is closed and the theater dark, but right around the corner the dressing room is bursting with color and energy. Inside, the cast is getting fitted in wigs of shimmering silver, burnt orange and pale pink. Fur lines the walls on costume racks, and makeup artists and actors alike prowl in and out of dressing rooms, wielding everything from styrofoam mannequin heads to eyebrow pencils.

In four hours, faces are painted, wigs are teased and the troupe is transformed into a band of feline creatures.

The Elon Department of Performing Arts opens its production of “Cats” at 7:30 p.m. Feb. 9 in McCrary Theatre under the direction of Associate Professor of Dance Lynne Kurdziel Formato. Formato is supported in costume, makeup and design by guest designer Caitlin Graham ’11.

Based on T. S. Eliot’s “Old Possum’s Book of Practical Cats,” “Cats” follows a tribe of cats who come together on one fantastical night for an annual ball. Winner of seven Tony Awards, the show is the fourth longest-running show in Broadway history and is now successfully sharing its story to a new generation in the “Cats” Broadway revival tour.

Formato described “Cats” as a foil to recent student productions such as “Parade” and “Little Women.”

“There’s an allowance for freedom and creativity in dance, within the parameters presented in its lyrics and music,” she said.

The loose parameters of the lyrics and music also allow for freedom in the design.

In most productions, there are a certain amount of costume elements that be can pulled from costume stock, rented from someone else or purchased, but this show is completely built and created from scratch. There are a lot of steps in the process.

Graham graduated from Elon with double majors in acting and design and production, and since then has been attending graduate school in Austin, Texas, for costume design.

While at Elon, Graham starred in performances such as “Noise is Off” but eventually realized she was more drawn to designing productions than acting in shows.

Last spring, Graham was asked to design when Karl Green, assistant professor of performing arts, who usually designs the show, was on sabbatical.

Graham, thrilled to come back to Elon and help with the show, has spent the past eight months flitting between Austin and Elon to oversee fittings, create maps for the shop to follow and demonstrate concepts such as fur placement so that costume elements could be implemented in her stead.

Even with Graham’s careful eye for detail and meticulous planning, the extensive “Cats” costuming and makeup design would have been impossible to accomplish without her assistant designer, senior Claire Bishop.

While Graham was in Austin, Bishop was able to follow through on Graham’s vision with an ongoing thread of emails, texts and Skype calls. As a double major in theatre design production with focuses in costumes and arts administration, Bishop was a perfect candidate to accomplish what needed to be done with a designer that could not be physically present.

“It’s insane when you think about it,” Bishop said. “All the fur has to be hand-sewn, which takes so long. There’s all the dying and the painting. It takes so much more time than you’d think.”

Every costume took an immense amount of effort. Every unitard has to be hand-painted, and all the fur placement must be done while the unitard is on the body to determine exactly how it will lay and stretch.

Each cat is uniquely designed to reflect its individual personality and style of dance. From the fur to the tail to the spots, every character has subtle differences that unify on the stage to create a cohesive picture of heightened theatricality.

But different characters pose different challenges. The cat tails have to stay attached to the body with centripetal force as the dancers turn, and depending on the moves the bodies make playing their character, the costume design must be able to adapt.

Originally the tails were made of polyfill tubing, but as they whipped with each twirl, the tails would break.

“We had to readjust and ended up getting upholstery cording, which is what makes the tail have all of the whip in them,” Graham said. “It’s interesting using different materials trying to achieve the effect you’re trying to get on stage, especially for dance.”

With all fear of tails flying off the stage soothed, Graham still had to worry about placement of necessary technical equipment.

“We’ve created these specialty mic packs that are sort of like a backpack and they wear them on the small of their back,” she said. “They have to be able to roll all over the floor and fall all over each other, and these are really expensive pieces of equipment. We try to pad them a little bit with the fur and put them in a place that they don’t roll on as much.”

The silhouette of each cat is as customized as its microphone placement. Unlike the original Broadway hit, Elon’s production of “Cats” is taking a softer, simplified and more streamlined take on both costume and makeup.

“In the Broadway version they all have leg warmers,” Graham said. “The show is very 80s, and it’s got that 80s pop-rock vibe to it. With our production, instead of having a typical leg warmer that goes up over the knee, we have pieces of fur that are sewn in sort of an elegant way to change the silhouette of each person on stage. When you look at them from a distance, the body shapes look different on stage.”

The original “Cats” embraces the bold and graphic styling of the 80s, and Formato, Graham and Bishop’s creative vision will give the audience a visual experience that is more poetic and romantic in style, with no loss of color.

Senior Kelley Norman, who plays Jellylorum, is excited to wear the updated designs.

“This production is incorporating more colors, and we’re making it more modern,” Norman said. “I started out in a white unitard, with no fur, and now it’s perfectly fitted to my body, and it’s pink. They’re beautiful designs.”

Graham’s early sketches were homage to the original show, but they didn’t seem to fit. The new renderings are now made up of a clearly defined nose and mouth, with overtly enlarged eyes.

“Instead of trying to put tons of graphic stripes, or tons of graphic spots, we’re trying to keep the face as clean as possible so that the emotion of the character can come through,” Graham said. “It’s not muddied up with different directions of makeup everywhere.”

Soft-blended color resonates throughout the “Cats” design in the dye, the fur and the intricate painting on top of the unitards.

The makeup is applied by a crew of eight artists, including senior Iris Sullivan, who is working on a theater production for the first time after gaining experience through makeup for film.

“We really wanted to make the makeup our own and more original, with our own Elon flair,” Sullivan said, echoing Graham’s earlier sentiments.

But Sullivan most enjoys the transformation to the end result.

“My favorite part is getting to know the actors and talking to them,” she said. “When you start putting on all the costumes and the wigs, they get to really see their characters. Seeing that excitement when everything is done and the final face is on, that’s my favorite part.”

While Sullivan looks toward the actors when the look is complete, Bishop focuses on the audience.

“I always love watching an audience because doing theater and helping people create emotions that they didn’t think they’d come into the theater having is really special,” Bishop said.