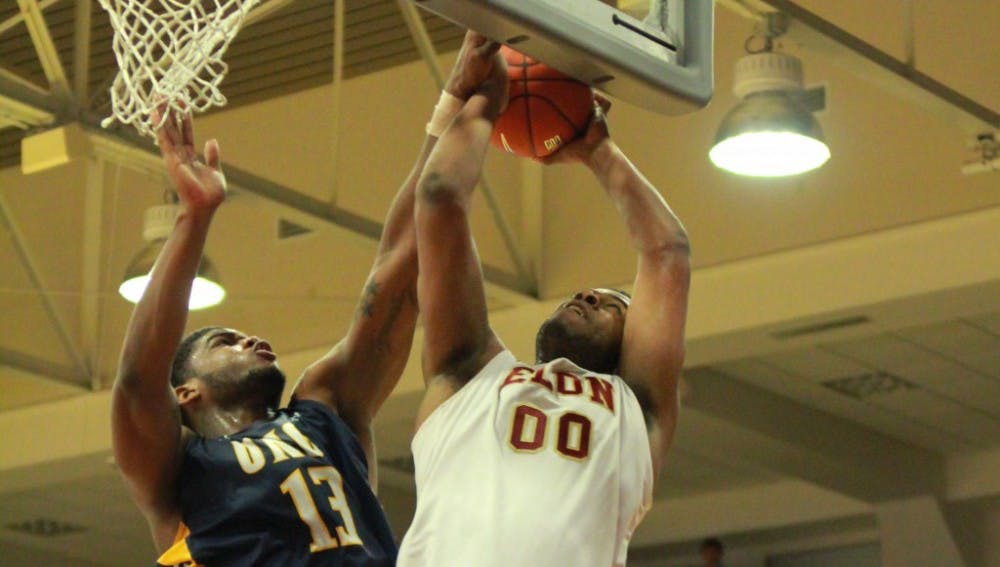 Freshman forward Brian Dawkins has proved to be a valuable asset off the bench for Elon, and according to Matheny, has been playing meaningful minutes for the Phoenix. File photo by Ashley King, Staff Photographer.

HARRISONBURG, Va. — After a 3-point shooting display in the first half, the Elon University men's basketball team struggled against James Madison University's press in the second half of a 60-59 loss on Saturday afternoon.

The Dukes strategically employed a trapping pressure defense right after Elon sophomore guard Dainan Swoope exited the game with a shin injury. The result was a frazzled Elon offense that shot just 23.1 percent from 3-point land in the second half.

"They were able to slow us down with that press and take time off the clock," said Elon sophomore forward Tyler Seibring. "It allowed them to score and set that up. That's what we need to prevent to succeed against a team like this."

The results showed for JMU, which was able to bounce back from a 53-51 loss at College of Charleston.

Elon wasn't charged with a single turnover in the first half. In the second, the Phoenix committed seven.

"We didn't have energy in the first half," said Dukes coach Louis Rowe. "I thought we had more focus in the second half. There were some moments where we had to tweak some things defensively, especially down the stretch, but the main thing was the energy and the focus.

"We've been pressing. That's something I want to do. ... I thought in the second half, no matter what happened, we needed to create some energy and maybe pressure a little more."

SWOOPE CALLED FOR TRIPPING: As Elon tried to break the press after a made basket in the second half, Swoope was charged with a flagrant-one foul for tripping.

Swoope was falling to the ground after getting tangled up with JMU's senior forward Paulius Satkus when he reached out and took a swipe with his left arm at Satkus' legs.

Rowe was irate, running out onto the court to protest. He had to be held back by his assistants.

After reviewing the play for several minutes, the officials assessed a flagrant-one.

"It happened in the moment," Rowe said. "I'm not trying to figure out where his mind was. I thought the call was the right call. But I don't think that's a bad kid or something malicious happened."

In transition, Dawkins scored in the post before Jeff Hon whistled for an offensive foul. But after referee William Humes called a meeting between the officials, the call was changed to a blocking foul.

That made Dawkins' basket good and brought the Phoenix within four with 1:47 left.

NOTES ...: James Madison was holding a parade for its FCS national champion football team this afternoon around campus. ... Swoope left the game for four minutes with a shin injury. He busted up his lower lip in Thursday's win against Hofstra. ... Elon hosts Drexel University and College of William & Mary next week in Colonial Athletic Association action.