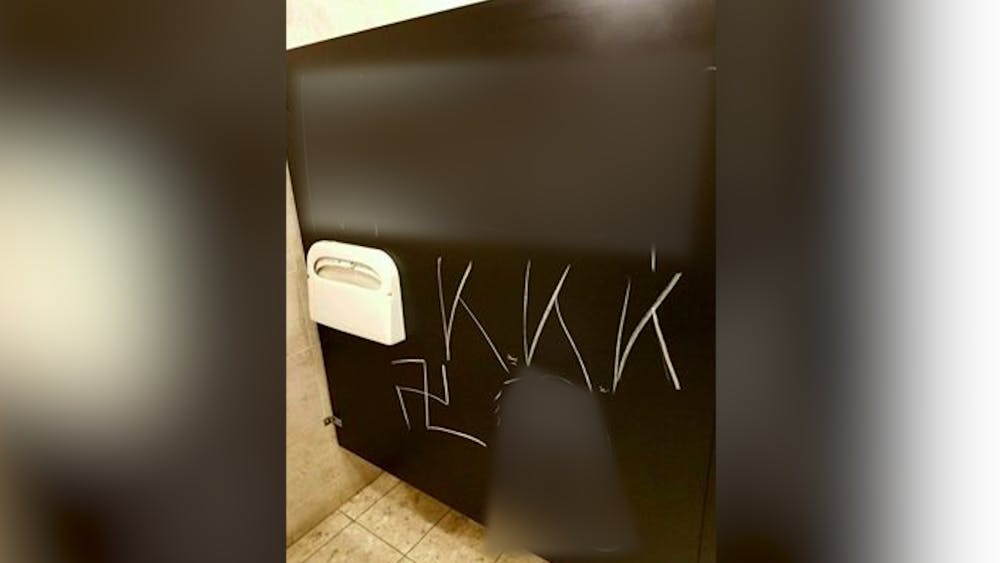 These words and symbols were written on a bathroom wall at the Koury Convention Center in Greensboro at an annual statewide convention for the historically black Alpha Phi Alpha fraternity, founded in 1906.

"It wasn’t a shock to us that someone would do that, especially in North Carolina," said Elon University junior Alonzo Cee, vice president of Alpha Phi Alpha.

Cee saw the hateful graffiti for himself after his friend and brother told him that it had happened. He said that "it was rough to see."

The brothers of Alpha Phi Alpha were attending this convention to discuss fraternity business on a state level. There were more than 200 attendees, including all seven members of the Elon's Sigma Delta chapter.

“It was in the bathroom right next to the main ballroom, which is where we had most of our business meetings," Cee said. "So it was blatantly places, like, right next to us."

Sheraton Hotels, which operated the Koury Convention center, told Elon News Network the graffiti was cleaned off the bathroom wall within minutes of staff knowing about the incident. The hotel also released a press statement on the incident.

"The Sheraton Greensboro Hotel, Joseph S. Koury Convention Center is deeply saddened by the incident this weekend involving the hate graffiti that was maliciously placed in one of our public bathrooms. The Hotel immediately acted to remove the graffiti when we became aware of it and an investigation started. The Sheraton Hotel sharply condemns this act of hatred and will do all that we can do to [ensure] it does not happen again," said Kelly Harrill, director of sales and marketing, in an email.

There was no update on the progress of the investigation.

Cee said that, although the brothers of Alpha Phi Alpha were upset, they did not let it bring them down.

"We just see it as more of something to empower us and keep doing the business that we're doing because we are trying to uplift the communities in the area," Cee said. Making the greater community better is one of Alpha Phi Alpha's national fraternity values.

Looking forward, Cee said he hopes his fellow brothers will use this "as an example of people who are going to try and get in [their] way and the obstacles that [they] need to overcome." He said the next step on Elon's campus is to continue to educate people about race, bias, intimidation and discrimination. He hopes to organize an event soon that helps facilitate this education.

"This is just a perfect example of we just need to keep on educating people on issues," Cee said. "So I know us as a fraternity within the state — we're going to take this and run with it and try to educate people."