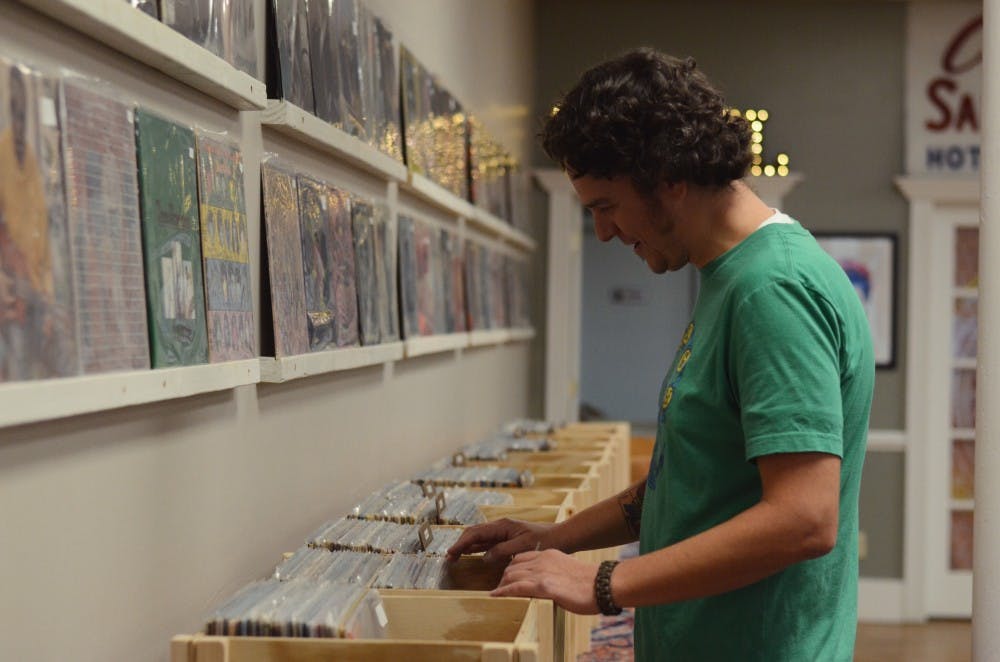 Josh Garrett was raised listening to music on vinyl. At home, his father would always have a record on, playing classic rock from the 50s and 60s.

“When I got older and settled down and got my own home, he passed me all his old records, and it led me to seek out my own,” Garrett said.

Many years later, he decided to open up Main Street Vinyl in downtown Burlington on 321 S. Main St., showcasing his old collections as well as newer albums.

Just like his father , Garrett has a record playing constantly in Main Street Vinyl. Among the stands of older and newer records with prices ranging from $2 to $30, there is a small stage in the corner and a lounge, giving customers a chance to enjoy the small vinyl shop.

Garrett was inspired to start his own business with his girlfriend, Amy, when he found out that Triangle Vinyl in Mebane was closing. With the closest record stores located as far as Greensboro and Chapel Hill, he wanted to bring the experience to Burlington.

“We thought that Alamance County deserved a brick-and-mortar record store,” Garrett said. “So we jumped on the opportunity, and we’re kind of glad we did.”

Throughout the process of opening the store, Garrett got help from Justin Hall, the previous owner of Triangle Vinyl. According to Garrett, he told them various ins and outs of the business, including how to price albums, how to grade albums and how to purchase more albums.

“I know from talking to him, he was really invested in the area,” Garrett said. “He wanted us to succeed. He wanted us to be here for the community. It was a good seamless transition from his shop to mine.”

The older records found in the store comes from Garrett’s previous collections that he’s purchased or that were given to him. Some of the records are the same ones that played in his childhood home, passed down from his father.

In the future, Garrett will get new albums from a distributor, but plans on searching through Craigslist and flea markets to find older albums.

He also hopes to host musical acts and events as much as possible and aims to have a section in his shop that specifically features local and North Carolina bands. Garrett said he wants his customers can experience the same feeling he gets when he holds a vinyl record.

“For me, it’s the act of picking up a record and holding the physical music in my hand,” Garrett said. “Taking it out and looking at the album art. The sound — the sound is so much fuller and deeper.”

On Saturday, Nov. 19, Main Street Vinyl had its official grand opening celebration. Throughout the day, there was live music performances as well as a raffle with gift cards and lesson vouchers to local downtown Burlington shops and businesses.

Though Main Street Vinyl only just opened on Nov. 15, Garrett said business has been great. Burlington resident and Elon University alumnus Tom Kimlet ’72 came in to trade some of his old vinyls.

With a revitalization of downtown Burlington, with shops such as The Blend & co. and the upcoming Burlington Beer Works, Garrett believes the store is opening at the perfect time.

“I want it to turn into a place that people gather,” he said. “I want people when they come in to grab a cup of coffee, sit down with a magazine and chill out and listen to music.”