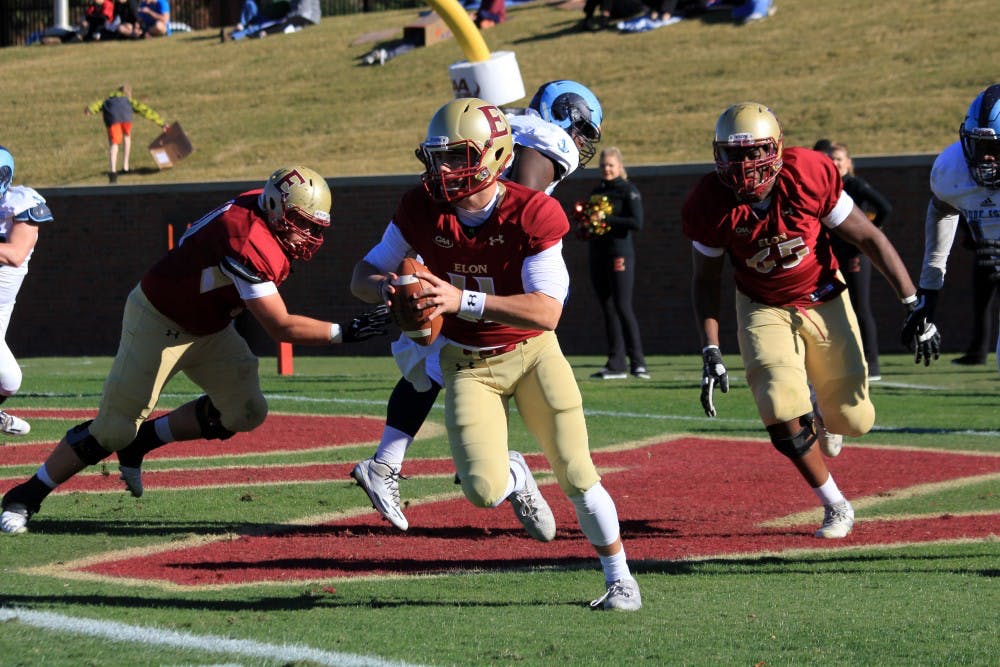 HARRISONBURG, Va. — A season that was supposed to be one of growth and fulfilled promise finished its freefall Saturday afternoon with expected humiliation, as the Elon University football team lost its seventh straight game 63-14 to the Colonial Athletic Association (CAA) champion James Madison University (JMU) in Harrisonburg, Virginia.

James Madison’s offense moved the ball at will, gaining 699 yards with a near perfect balance of 362 rushing and 337 passing.

“Obviously, their offense is very high-powered,” said sophomore linebacker Matt Baker, who finished with five tackles. “They have a really good balance of running and throwing the ball. We just missed too many tackles, and we have to work on executing. But JMU is a really good team, and they’ll go really far in the playoffs.”

The Dukes scored on each of their first five drives, picking up 378 yards in just 16 minutes and 13 seconds in doing so. James Madison got a 23-yard scoring run from sophomore running back Trai Sharp, a 70-yard touchdown pass from freshman quarterback Cole Johnson to senior wide receiver Domo Taylor and a five-yard run from junior running back Taylor Woods. Sophomore kicker Tyler Gray added field goals from 21 and 23 yards out.

“Obviously, credit to JMU, and we wish them well in the playoffs,” said Elon head coach Rich Skrosky. “Obviously, they’re a good team, and we knew that going in. The way it started offensively — their efficiency on offense has been evident throughout the year.

“But the biggest thing I was most disappointed with defensively for us was tackling — we gave up too many big plays — and our inability to tackle with any kind of efficiency.”

Elon scored its lone touchdown of the half late in the second quarter, when sophomore quarterback Daniel Thompson’s heave toward the endzone was caught by sophomore wide receiver Efrim Borders, who avoided his defender and took one step into the endzone for a 56-yard touchdown. Skrosky was pleased to see Borders step up, especially with a few injuries to the wide receiver position.

“He just did a really good job stepping on the safety’s toes and getting past him,” Thompson said. “He was supposed to bend in if the safety was over the top, but the safety was flat-footed, so he kept running. I just put it out there and let him make a play.”

Elon opened the second half with a methodical drive, going 75 yards in 5:47 on just 11 plays. Freshman running back De’Sean McNair carried the ball for nine of the 11 plays, finishing off the drive with a one-yard score. Elon had cut the lead down to 13, something that fired Thompson up.

But James Madison responded by scoring 36 points unanswered on its next five drives, scoring three touchdowns through the air from three different passers, a rushing touchdown and a punt return touchdown. Thompson sees an opportunity for Elon to learn from how James Madison approached its drives.

“It’s a touchdown — when you get them, they’re great, and you’ve got to express and let everyone know how good they are,” Thompson said. “It’s got to be something that’s a habit, though. JMU, they expected to score every time they are on the field. For us, we kind of wanted to score. We’ve got to change the mindset, to expect to score every time you step on the field.”

The loss caps off a 2-9 season for the Phoenix, who lost all seven CAA games after starting conference play with a 27-10 win at the College of William & Mary Sept. 24.