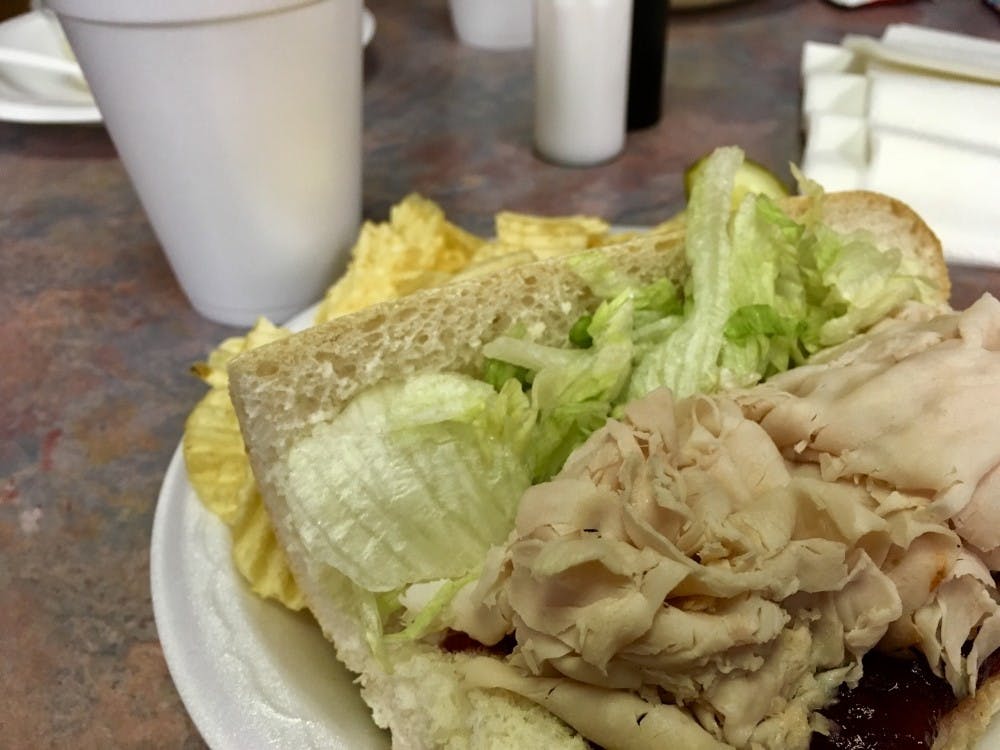 
Mike’s Deli offers specialty subs such as the turkey and cranberry or the Philly cheesesteak, fan favorites.

Calling all students homesick for the New York and New Jersey area: there exists a deli down the street that brings the familiar sights and tastes of the city.

Stepping inside Mike’s Deli, located at 3340 South Church St., patrons are immediately greeted by an old-fashioned feel, complete with a seemingly endless menu of subs, wraps and salads. In addition, they have a breakfast menu and serve these items, such as eggs and bagels, all day long.

Prices are college student-friendly, ranging from $5-$10 a meal. Though it’s just under a 10-minute drive from campus, they offer delivery.

The deli serves Boar’s Head items, and is comparable to what Elon Dining offers with its downstairs Colonnades selection. But if you’re in the mood to get off-campus, find a local treasure and not break the bank, Mike’s Deli is a great option.

The walls are littered with 40s- and 50s-era decor — a charming touch to an otherwise normal sub shop.

Mike Sculthorpe, founder of Mike’s Deli, opened up the shop in Graham in 1989. He ran the deli there for 10 years before moving to Burlington at its current location. Prior to his stint in North Carolina, Sculthorpe worked in New Jersey.

“He noticed there wasn’t anything like it down here, so he decided to open up the deli,” said Audra Watkins, one of the managers of Mike’s Deli. “And as of this coming March, he will have been in the business for 28 years,”

It’s perfect for something quick and reminiscent of the infamous delis of the northeast coast. Food is ordered at the counter and brought to you once ready. And in true fast casual form, food is served on Styrofoam plates.

Subs are offered hot or cold, but temperature preference should be specified. A top menu item, the turkey and cranberry, is sub-par when eaten cold — speaking from experience. Another popular item, the Philly cheesesteak, lived up to its favored status, coming perfectly toasted.

Other than Sunday’s, when the deli closes at 3:30 p.m., the hours are 9 a.m.- 8 p.m. The shop is typically packed with hungry, happy locals all throughout the week.

“We’ve really seen [Mike’s Deli] grow in the past two years as far as Elon students,” Watkins said, noting that adding breakfast to the menu helped with this growth.

Watkins, who has worked at the deli since she was 17, said that the deli staff is her family away from home, a great group of friendly people she’s gotten to work with for nearly nine years.

Though Elon students have several sandwich options on campus, Mike’s Deli is unique in that, aside from being a quick place to grab a bite to eat, it is a true deli that offers several meat and cheese options.

The deli sells all of its Boar’s Head brand meats, cheeses and salads by the pound. On the weekends, there are specials on
the meats.

And just in time for the holidays, Mike’s Deli will be serving hams and turkeys perfect for feeding a large group, so Elon students can head over to Mike’s to prep for “friends-giving” festivities.