As election draws to a close, so does patience 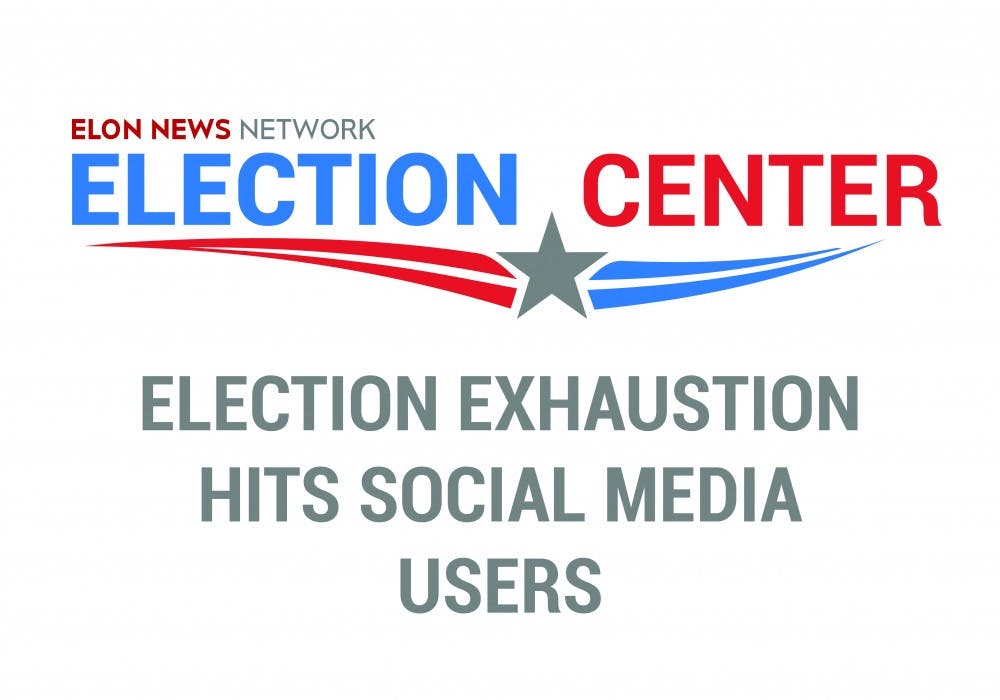 This piece appeared in the Nov. 2 Election Special Edition. View more from that edition.

Elon University freshman Payton Barr doesn’t have a lot of social media accounts — just Instagram — but she still can’t escape this election season’s political posts. And she’s over it.

“It gets kind of old,” Barr said. “People just get really aggressive about it. I don’t like to see that kind of negativity in my feed. I get sick of seeing it.”

A recent Pew Research Center analysis found that more than one-third of social media users surveyed, like Barr, are sick of political content on their feeds. The study found that 37 percent of those surveyed said they were “worn out by how many political posts and discussions they see” on social media, saying they found it “stressful and frustrating” to read posts from those they disagree with.

But it wasn’t just the content of the posts or the expression of a different political opinion that frustrated participants in the survey — instead, they pointed to the “uniquely angry and disrespectful” tone of many political posts and discussions as the reason for their frustration.

Senior Katie Condon said she’s also annoyed by the tone of the political content that floods her social media feeds. She said that though well-researched points about politics have their place on social media, she thinks they get overwhelmed by the more “aggressive” and “disrespectful” content.

“You can [post about politics] in an appropriate manner, but a lot of the time that kind of content is like, one out of 30 posts, and the other are like, ‘You’re wrong because you’re voting for this person!’” Condon said. “That noise is so much louder than respectful, appropriate, well-informed content."

Both Condon and Barr said they think social media could be a place where meaningful political discussion could take place, but they aren’t holding onto much hope.

“I feel like it could be a really good place for people who have ideas to discuss, but oftentimes, it just gets so heated so quickly,” Barr said. “People get so angry. I wish it could be more of an open discussion instead of people just bickering at each other. It would be helpful.”

As annoyed as she is by political posts, Condon has found a solution: to “scroll past the noise” and go on about her day.

The Pew study found that 83 percent of social media users surveyed said they tried their best to ignore political comments they disagreed with that pop up on their feeds, while 39 percent said they’d actually changed their settings to unfollow those who expressed a contrary opinion.

But as a senior strategic communications major looking ahead to life after Elon, Condon also sees another reason not to engage with political posts, and she had some advice to offer her fellow students:

“Especially as college students looking for jobs, you have to be aware that what you are posting politically, social issue-wise — that really matters,” she said. “And maybe don’t. Just don’t. Maybe just keep some of those conversations for a different kind of medium.”