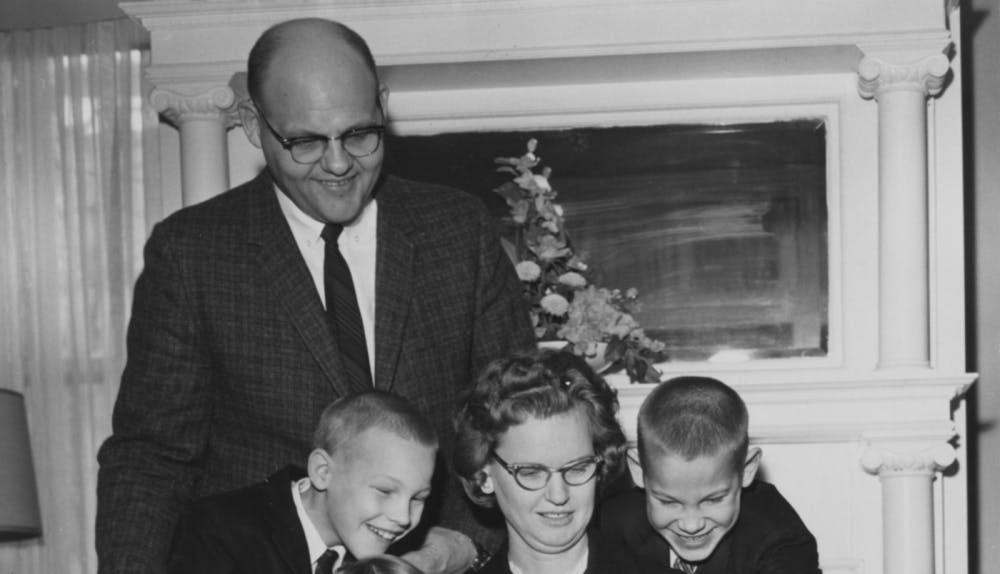 When J. Earl Danieley was asked how he met his late wife, Verona Danieley, at the 2014 Spring Convocation, his eyes lit up. He smiled, readjusted himself in his iconic chair and began to recite the story — that is, until, he was interrupted.

A member of the audience loudly declared, “Ugh, I love this story! This is my favorite,” capturing the adoration many Elon University community members have for the couple.

It wasn’t the first time he was interrupted when telling the story.

In a 2008 interview for a three-part series that documents J. Earl Danieley and Verona Daniels Danieley’s 60 years of marriage led by University Archives, he began in a similar way — with lit-up eyes and a big smile.

But instead of continuing, he turned to his wife and asked, “Are you going to tell this one or am I?”

To which she responded, laughing, “You tell it, it’s your favorite story.”

With a smile still plastered across his face, he continued, recounting how on one Saturday afternoon in the fall of 1946, he was passing through the halls of Alamance when he noticed a young lady in the office of the secretary of the president, standing on a chair.

“I walked in and saved the young damsel. Then I took her to a football game at Guilford,” Danieley said. “And everywhere else with me from then on.”

Whether it the story of how they spent their first date on a hayride, their memories of sharing meals together in West Parlor with the lights off to conserve electricity or how they referred to each other as “permanent roommates,” these accounts of their relationship are cherished and often remembered by the community.

Their relationship, which began and flourished at Elon, and their combined passion for the growth of the institution is written into Elon’s history and landscape.

Whether through the Danieley Neighborhood or joint initiatives they have spearheaded in the years, their fierce love for each other and the university has led to lasting legacies.

When J. Earl Danieley assumed the role of president in fall 1957, for example, Verona Daniels Danieley devoted her time and energy to building community across campus.

Jerry Tolley, former Elon football coach, remembers her for her efforts to create community among the wives of professors at Elon.

“She really took the wives of staff and faculty members at Elon under her wing,” he said. “My wife especially loved her all through her time.”

Together, they would also host faculty dinner gatherings — inviting professors into the warmth of their homes to foster deeper relationships.

“I can remember seeing them walk through campus holding hands,” Tolley said. “Their relationship was inspiring for all professor couples on campus.”

In 1972, the Danieley couple also jointly established the Daniels-Danieley Award for Excellence in Teaching, the university’s highest teaching honor, in memory of their parents. The award has recognized the outstanding contributions of more than 40 faculty to date.

Stephen E. Braye, who received the prestigious award in 1998, said it served as an affirmation that he was heading in the right direction.

“I was honored to be nominated,” he said. “It re-energized my commitment to teaching.”

Following the opening of the Danieley Center in 1999, university trustees unanimously approved the naming of Lake Verona in 2004 — adjacent to the neighborhood — to recognize Verona Daniels Danieley’s many contributions to her alma mater and the community.

Nancy Midgette, professor of history at Elon University who retired in May 2016, said she remembers the two being inseparable.

“You didn’t separate them in your mind — they were always Dr. D and Mrs. D,” she said. “They were just a pair.”

After more than 60 years of marriage, Verona Danieley’s death in June 2011 left a gaping hole in the community and in the life of her widower.

“They always came to campus events together,” Midgette recalled. “After Verona’s death, it was clear that he remembered fondly and missed her dearly but that he was accepting.”

When asked what the secret for their lasting marriage was, J. Earl Danieley had a clear answer: respect and honesty.

“I think that one of the secrets is having respect for each other,” he said. “I think people who fail do because they fail to respect each other.”

“I would hope that they see in us, the proper attitude to take towards themselves and other people and to be respectful.”