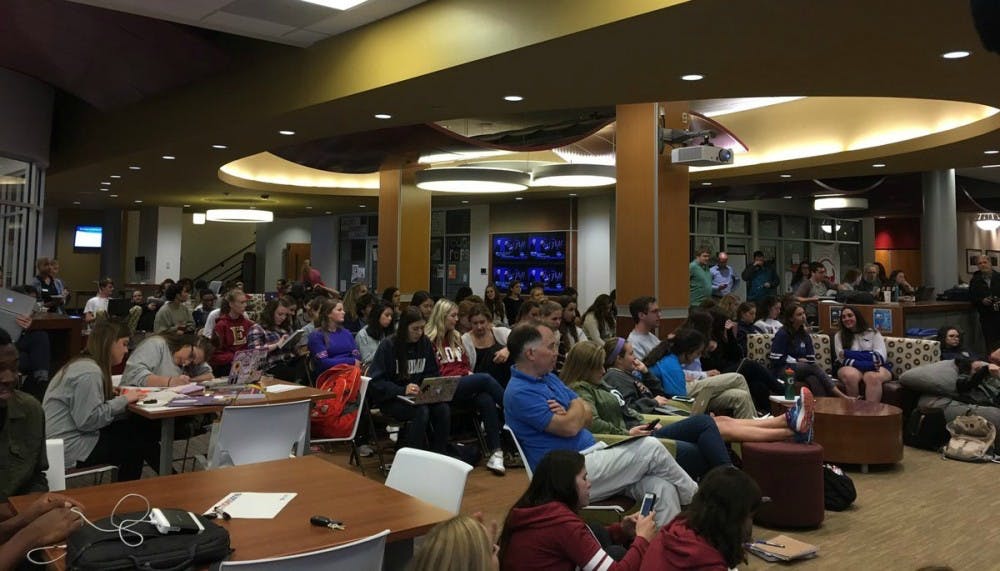 Hundreds of students packed into the Moseley Student Center Sunday night for the second presidential debate.

Students gathered and crowded in Moseley to watch the candidates face off again, while enjoying cookies and brownies. This is the second debate watch party hosted by Elon Votes! and there will be another watch party later in October, which will lead up to the Election Night watch event Nov. 8.

Energy was high in Moseley as students elicited a variety of reactions to Republican candidate Donald Trump and Democratic candidate Hillary Clinton: laughter, cheers and gasps of disbelief. What was supposed to be a civil debate concerning policy issues turned into a heated battle between the two candidates.

"It kind of turned into a back-and-forth of personal attacks, which was a little concerning." Williams said. "It was kind of what I was expecting and I'm sure a lot of other people were expecting, too."

Junior Christine Lane echoed the sentiments of many students, but said it is important to take part in such a historical event.

"People are going to put this election in textbooks and they're going to make movies about it," Lane said. "People are going to study it in political science classes for the next hundred years, so I think it's really important to be a part of and actively participate in – and I love that Elon encourages that."

The next and final presidential debate will be on Wednesday, Oct. 19.