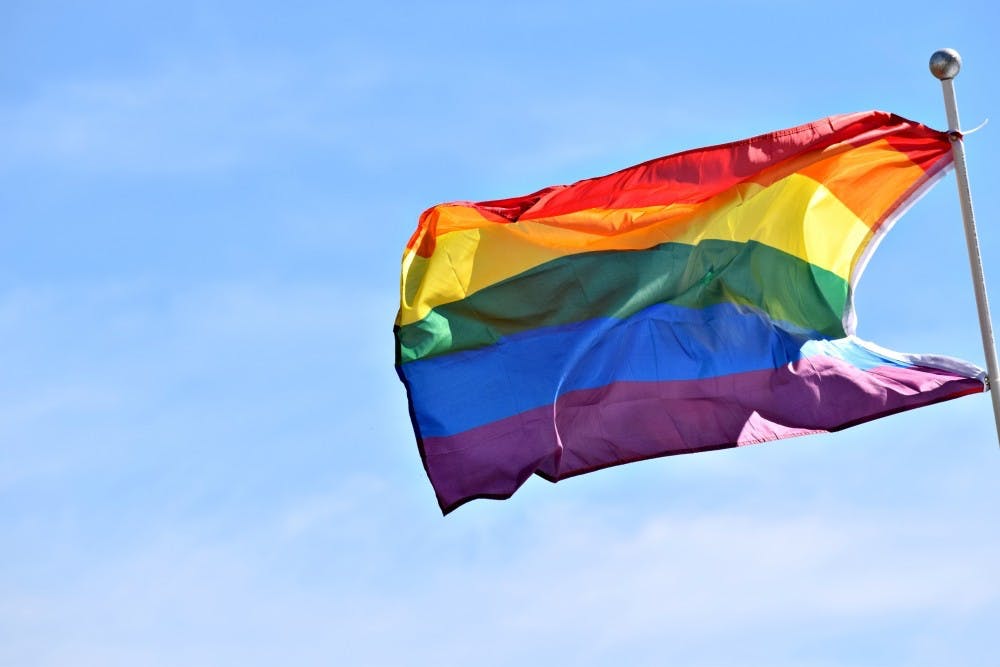 Gary Cooper was shocked by what he saw in downtown Burlington last weekend. A resident in the town since the 40s, he never imagined he would see rainbow flags and the community coming together to celebrate LGBTQIA and inclusivity.

As part of LGBT History Month, Alamance Pride, a nonprofit that serves the LGBTQIA community, organized a festival to celebrate and educate Alamance County about the importance of equality.

The festival opened with an interfaith service with speeches and prayers from various churches around the area, including Rev. Phil Hardy from Elon Community Church and Joel Harter, associate chaplain for Protestant Life at Elon.

“I’m a Baptist who changed his mind because of dear friends — dear gay friends and queer friends who loved and accepted me and helped me to sort of embrace this love and acceptance for all people, whoever we are,” Harter said to the crowd.

As a pioneer in the Burlington LGBTQIA movement and founder of Alamance Pride, the Oct. 1 event showed Cooper how far the community has come in terms of acceptance, despite the many challenges.

“I never thought I would hear the words said on that stage,” Cooper said. “I had to go through some things and I hope the younger folks never have to experience what I did.”

Life's Journey United Church of Christ set up a vendor tent to give attendees information about the open and affirming church. Photo by Maritza Gonzalez.

This demonstration of acceptance from the church was a stark contrast against a small protest outside the fence surrounding Alamance Pride, where individuals held anti-LGBTQIA and pro-Christian flags.

But they did not impact the celebration going on inside.

During the festival, the stage was filled with music. The Megan Doss Band headlined and local speakers included Burlington Mayor Ian Baltutis, who declared Oct.1 as Burlington Pride Day.

“I think this is a critical event for showing the community how much Burlington is progressing,” Baltutis said. “We’re a community that’s growing and we embrace all of North Carolina.”

The festival also featured drag events and more than 50 venders with pride gear. Organizations were also represented, including the Human Rights Campaign and Elon University, which showcased the Gender and LGBTQIA Center (GLC) and Spectrum.

Elon is an event sponsor and has three faculty on the Alamance Pride board. According to Matthew Antonio Bosch, director of the GLC, the event brings together all people and Elon wanted to be a part of it.

“I think what people realize is that a lot of the larger cities have these,” Bosch said. “Elon being so pro-LGBTQIA in a lot of ways, people look to us for knowledge across the country, so why not be a sponsor?"

At the tent, they gave out information on admissions and how Elon is working towards inclusivity as one of the top 25 LGBTQIA-friendly campuses.

A handful of students from College Democrats wandered around the festival with clipboards, hoping to register attendees to vote in North Carolina.

Sophomore Amy Belfer said most people were already signed up but that she did register a few 16 year olds, who are now able to register even though they cannot vote.

“I just want to make sure people aren’t being disenfranchised, especially because until recently there were voter ID laws, so people couldn’t register without a photo ID,” Belfer said. “Now we're getting those voices, because everyone should have a say in who's president.”

Belfer drew similarities between Alamance Pride and voter registration in terms of inclusivity and getting voices heard. She hopes to see more people getting involved with these kinds of events, especially after the huge turnout at the festival.

“I’m part of the LGBTQIA community, and I think it's really important that our voices are heard in the government, especially in the heteronormative society we live in," Belfer said. "Everyone deserves equal rights."

Elon University was an event sponsor for this year's Alamance Pride festival. Photo by Maritza Gonzalez.

Despite Elon’s strides in making policies for inclusivity such as asking for preferred gender pronouns, there is still push back from North Carolina for acceptance. According to Swirsky, people did not attend Elon because of House Bill 2, also referred to as HB2 or the Bathroom Bill.

She said she would also like to see more student activism on campus, to have visible support for inclusivity.

“Elon has done a lot with the GLC and our campus pride ranking is going up every year, but I find it to be a lot of administrative policies that are really doing it,” Swirsky said. “The campus climate hasn’t necessarily changed a lot.”

The event also gave Elon students a chance to get more involved in the LGBTQIA community beyond the campus boundaries.

“Burlington is not the most progressive community and we're taking steps in the right direction,” Swirsky said. “I hope students will feel a connection to Burlington because of that.”