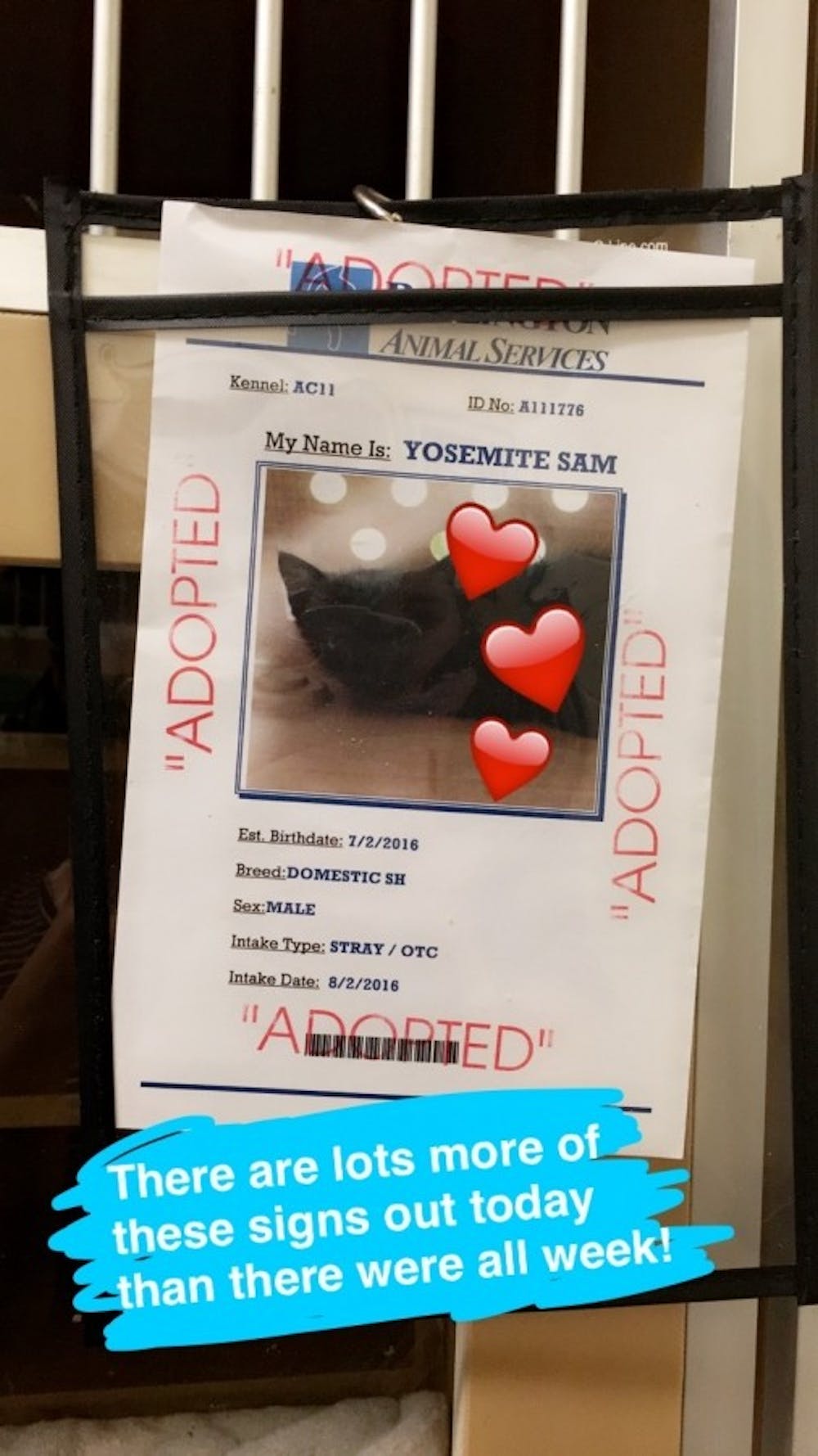 Senior Sara Galinko had no idea she would end up saving a dog's life.

The pitbull-lab mix jumped in the open door of Galinko's sorority sister's car when a group of her friends pulled over on the side of the road. The group took him to the Burlington Pet Adoption Center, where workers told them there wasn't room in the shelter for another dog, at least for a couple of days. They needed to find him a foster home.

As a senior living off campus, Galinko wouldn't be breaking Elon University policies by taking the dog in for a few days. So she took him home Tuesday, Aug. 16, and she promptly fell in love.

"How could anyone not want him?" she said. "He's housebroken, he's smart."

Fostering Caden wasn't Galinko's only interaction with pet shelters. She had volunteered community service hours at a pet shelter at home in Rhode Island, where she answered the phone, helped with administrative duties and, most rewarding for her, walked the dogs.

"There's no better situation than giving time to animals," she said.

Elon students other than Galinko have found the value in volunteering to help with pets in shelters. Because of her living situation — not restricted by the university's on-campus pet policies — Galinko was able to actually foster a dog until room opened up at the Burlington Pet Adoption Center. But as many on-campus Elon residents can't foster or adopt, they have embraced other ways of helping out instead.

Senior Ben Lutz has volunteered at the Burlington Pet Adoption Center on several occasions with an on-campus organization called the Animal Protection Alliance (APA), housed under Elon Volunteers! APA brings Elon students to the shelter to play with the animals there, to everyone's benefit.

"I love animals and had pets growing up, so playing and socializing at the animal shelter was a great way to destress but also spend time volunteering," Lutz said.

Playing with the animals isn't just about de-stressing. As Lutz and Galinko both explained, playing with animals helps them get used to humans, which helps their chances of leaving the shelter.

“Animals are more likely to be adopted if they’re socialized," she said. "They don’t get a lot of people time [without visits], and it's the easiest thing in the world to fill out the waiver and go visit.”

If students can't adopt animals on their own, then they can help get animals adopted. And now is a particularly important time for that kind of help in Burlington.

"We are over capacity with loving pets that need homes," the text on the SOS reads. "Please adopt or foster!"

"You put the call out, and it's amazing what people will do," Michel said.

According to her, once the shelter put out the SOS, they were "inundated" with members of the community wanting to help out. Between Wednesday, Aug. 24 and Saturday, Aug. 27, 68 pets were adopted and actually left the shelter, and 60 more pets were scheduled for surgery and will leave the shelter sometime this week.

In total, Michel said, between the beginning of August and the Aug. 29 interview, 191 pets had been adopted.

But Michel was quick to add that though the promotion was a huge help, the shelter will fill up again soon. The shelter has to think long-term, encouraging pet owners to spay and neuter their pets and keep an ID on them.

The shelter also thinks long-term in its volunteer work — which is where Elon students come into play.

Michel encouraged students who want to help to go through the APA, since the organization can train students at a time that fits better with their schedule than Michel could offer. Once they've gone through training, they can come volunteer whenever to help socialize the animals.

"Students can come get them out of the cage any time, teach them manners, love them, brush them," Michel said. "Teach the dogs how to be friendly, teach them how to sit, shake hands. It relieves the stress of the animals from being in the shelter, and a dog who knows his manners is more likely to be adopted."

Galinko ended up fostering her dog for about three days. But when room opened up in the shelter, she knew it was time to return him.

“I knew I wanted to keep him, but I can hardly remember to feed myself," Galinko said.

Galinko said she misses Caden, as she named the dog. But she's comforted in knowing he was adopted three hours after he was dropped back off at the shelter.