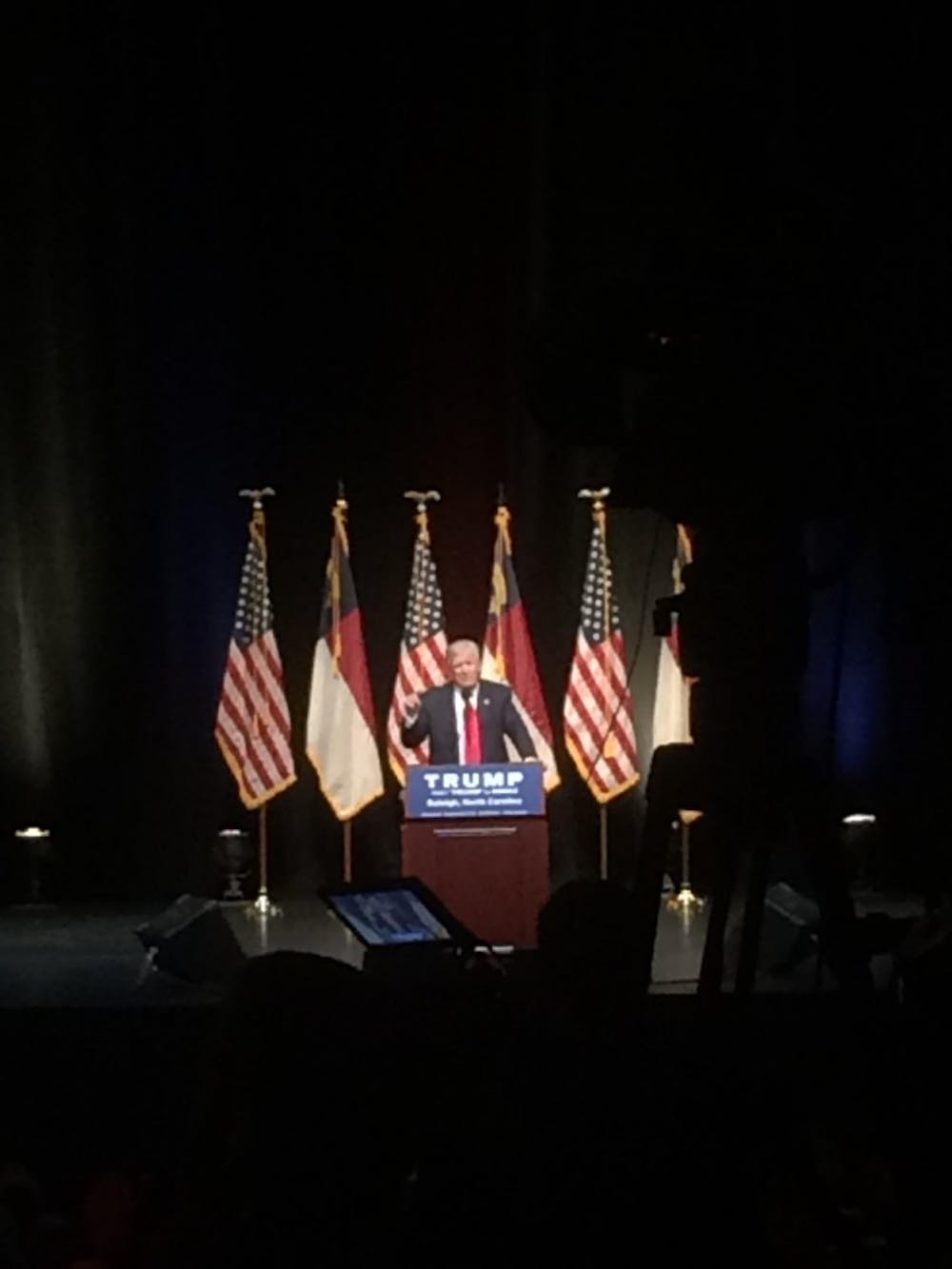 RALEIGH — Even as he strayed off on tangents, presidential candidate Donald Trump threw multiple verbal barbs at Democratic frontrunner Hillary Clinton at his rally at the Duke Energy Center for the Performing Arts in Raleigh Tuesday night.

Earlier in the day, the FBI said it wouldn't recommend charges against Clinton for her use of a private email server while Secretary of State. Trump and the speakers before him focused on the FBI investigation into Clinton, calling her a “crook” and “incompetent.”

In the presumptive Republican nominee’s third appearance in Raleigh in the past 13 months, Trump set the tone of the evening with an opening statement of, “The system is rigged, but we’re still happy to be together.” He spoke stronger on the topic half an hour into his speech.

“Today is the best evidence that we’ve seen that our system is absolutely, totally rigged,” Trump said. “We now know she lied to the country when she said she did not send classified information on her server. She lied.”

Trump hinted at multiple theories with regard to Clinton’s emails, one being that Clinton’s consideration of keeping Attorney General Loretta Lynch is “a bribe.” He also said that the enemies of the United States “may have a blackmail file on crooked Hillary, and this alone means that she should not be allowed to serve as president.”

Trump calls Clinton incompetent, says "She will be such a lousy president, folks."

Trump scheduled the rally four days prior in a move many believe was a counter to Clinton, who campaigned with President Barack Obama in Charlotte earlier in the day. Trump said he watched Clinton’s speech and said, “It was terrible. How boring was it?”

He also said he would be better for the gay community and better for women than Clinton would be on her best day. Trump also said that, “The last person these other countries want to see as president is Donald J. Trump.”

Trump also lambasted Obama, saying he is having “a lot of fun” in the White House and questioning the usage of Air Force One and its carbon footprint as well as the frequency of his golf outings, claiming Obama plays more golf than some professional golfers.

Taxpayers are paying a fortune for the use of Air Force One on the campaign trail by President Obama and Crooked Hillary. A total disgrace!

Trump also wondered about Obama’s appearance with Clinton on the same day as the FBI’s acquittal, accusing Obama of knowing the FBI would acquit her “because he wouldn’t be campaigning with crooked Hillary” if there were charges filed.

In addition to the comments on Clinton, Trump spoke of ISIS, saying, “We cannot let them get away with what they’re doing right now, terrorizing the world.” Trump called the people in ISIS animals, and said the beheadings the group carries out were from the Medieval Era. He also praised to Saddam Hussein.

“He was a bad guy — really bad guy,” Trump said. But you know what he did well? He killed terrorists. He did that so good. They didn’t read them the rights. They didn’t talk. They were terrorists. Over. Today, Iraq is Harvard for terrorism.”

Trump said he wanted to strengthen his borders, keeping his line where he asks the crowd who will build a wall and getting “Mexico” yelled in response. He also claim that Clinton wants to increase the number of immigrants from Syria, theorizing it could be a modern-day Trojan Horse for ISIS.

Trump: "If the right person asks them [Mexico], they'll be happy to pay."

Trump also claimed that he had drawn more people to Duke Energy Center for the Performing Arts’ Memorial Auditorium — capacity listed at 2,263 — than Clinton had drawn to the Charlotte Convention Center’s Hall C — capacity of 7,000. Both were reported as full.

In one of his many tangents, Trump talked about his father with regard to foreign policy negotiations, saying his father told him early in life he was too tough. He did say that Iran still “hasn’t figured out that the women are smarter than the men.” The tangents throughout the night could have been a factor why the crowd was not as raucous as previous Trump events, though the size of the crowd could have been a factor as well.

We're still waiting for Trump, but the crowd lets him know they are ready for him. pic.twitter.com/gnsZMd4Lp8

Crowd members chant, 'We want Trump!' as they wait for Donald Trump to take the stage Tuesday, July 5 in Raleigh.

In the end, Trump’s speech went on for around 65 minutes after a 30-minute delay, which happened partially because of two attendees who needed medical assistance before his speech. Both attendees were taken out on stretchers.

There were two protesters escorted out of the auditorium during the speech, both happening in quick succession. There also was a small group of protesters gathered outside the rally after the event, with the outpouring crowd throwing gibes back at the protesters.