Extra firepower is needed to gain votes for pivotal state 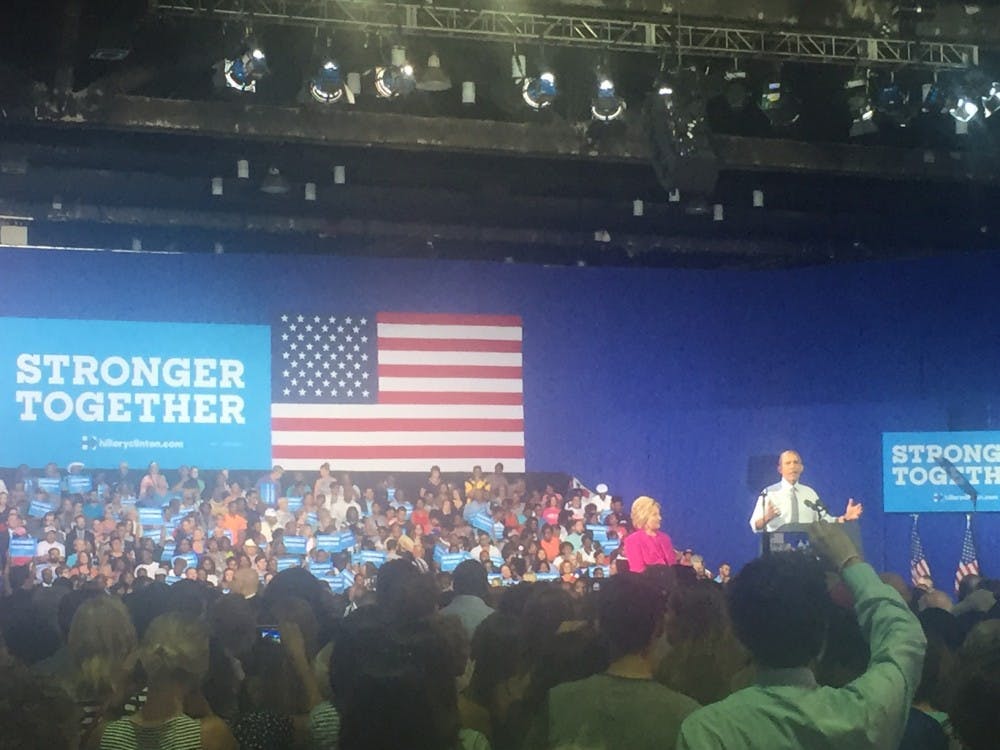 
President Obama repeatedly echoed why Hillary Clinton is more qualified for the presidency than Donald Trump.

CHARLOTTE — Democratic presidential nominee Hillary Clinton saved her biggest firework for the day after the Fourth of July— and it was aimed directly at Donald Trump.

In her second trip to North Carolina in the span of two weeks, the former First Lady,  accompanied by President Barack Obama, stressed the importance of togetherness and how she would champion the middle class.

Obama, in his first public campaign appearance with Clinton,  reiterated Clinton’s qualifications and his high regard of her, which he also stated in his recent video endorsement. Amid a crowd of thousands in Hall C of the Charlotte Convention Center, both Democrats emphasized the vitality of the 2016 general election while lashing out at Donald Trump, the presumptive Republican nominee.

“Despite all the progress we’ve made under [Obama’s] leadership — and we have made progress — we still have work to do,” Clinton said.

There's no one so qualified for the job as Hillary
Watch President Obama endorse Hillary.https://t.co/8oPGTAboNg

In the past 32 years, the Democratic Party has only won North Carolina once in a general election (Obama in 2008). Clinton currently edges out Trump in the Tar Heel State, leading him by merely two percentage points in a recent CBS Poll. Prior to the two main speakers stepping on stage, NC Democratic Party chairwoman Patsy Keever said, "the road to the White House runs through North Carolina."

Obama and Clinton have a history dating back to the 2008 Democratic primary, when they went head-to-head. Clinton then served as Obama's Secretary of State during his first term in office.

“I’m here for a simple reason,” Obama said. “I believe in Hillary Clinton, and I want you to help elect her to be the next president of the United States.“

Dressed in a pink suit, Clinton, 68, bulleted five ways she’ll improve the economy in her first 100 days of office should she become president. This was a tactical move for her, as Charlotte is renowned for its exceptional banking. The former New York Senator said she would make college debt-free by easing student loans, crack down on companies who outsource American jobs, hold millionaires to the same taxpaying standards of the middle class and create financial laws that adapt to the evolving living patterns of the typical American family, such as increasing the minimum wage.

Clinton drew upon her and Obama’s diversity frequently throughout the rally and said great leaders must be receptive of history while being versatile to changing, uncharted times.

“Just think about those early patriots who met in Philadelphia on that hot summer in 1776," Clinton said. "They knew we would all rise or fall together. Nobody who looked like Barack Obama or me (an African American or a woman) would have been included in that meeting, but we are here today because America is the story of hard fought, hard won progress.

“For 240 years our history has moved in that direction. As the President reminded us, the arc of the moral universe is long but it bends towards moral justice.”

Obama, 54, recalled instances he personally witnessed Clinton’s resolve and leadership, which he said merits her the title of the United States of America's 45th President. Her diligent and meticulous preparation during the 2008 primary debates, the positive opinion foreign capitals have of her and her first hand involvement in solving problems at home and abroad in the Situation Room such as the Bin Laden raid serve as tangible evidence of what she has proven she is capable of in a position of power, he said.

“Everybody can tweet but, nobody actually knows what it takes to be the president until you’ve been behind that desk,” Obama said in clear jab at presidential candidate Donald Trump, who is known for his use of social media. “You don’t know what goes into making life and death decisions until you’ve done it.

"[Clinton] participated in meetings where those life and death decisions have taken place. She’s seen the consequences of things working well and things not working so well. I know Hillary can do the job. I'm ready to pass the baton."

Obama had more negative words for the real estate mogul, who he said "has nothing to offer" the middle class as Commander-in-Chief. The President referenced Trump's well-documented temper and recent blacklisting of reputable media outlets such as The Washington Post. Obama, who blames the negative perception of Clinton’s tenure of Secretary of State as a product of the “political machine,” said Clinton’s levelheadedness and poise outweighs Trump’s impulsiveness.

President Obama urges the Charlotte crowd to vote against Donald Trump instead of just booing against the real estate mogul.

“When a crisis hits, you can't just walk off the set, you don’t have the luxury of saying whatever pops in your head,” Obama said. “You’ve actually got to know what you’re talking about. You can't just kick out reporters. You’ve gotta apply steady judgment even when things don’t go your way. That’s something that I’ve learned as serving as your president, and that’s something that Hillary learned as Secretary of State.”

While the atmosphere within the rally oozed support, and chants of “HILL-A-RY” and “I’M WITH HER," echoed throughout the event, animosity towards the Clinton campaign surged elsewhere. In Raleigh, Trump voiced his displeasure of Clinton and Obama flying to Charlotte together in Air Force One, saying it was a waste of taxpayers' money. He also called the justice system rigged because the FBI recommended no charges against Clinton for conducting state department business on a private email server, which FBI Director James Comey characterized as "careless."

Why is President Obama allowed to use Air Force One on the campaign trail with Crooked Hillary? She is flying with him tomorrow. Who pays?

Crooked Hillary Clinton is "guilty as hell" but the system is totally rigged and corrupt! Where are the 33,000 missing e-mails?

Clinton never addressed the FBI investigation or Trump’s comment about Air Force One, but she praised Obama’s accomplishments and asked if Trump would be better than Obama or herself.

“Can you imagine [Trump] sitting in the Oval Office the next time America faces a crisis?" Clinton said. “The world hangs on every word our president says and Donald Trump is simply unqualified and temperamentally unfit to be our president.”