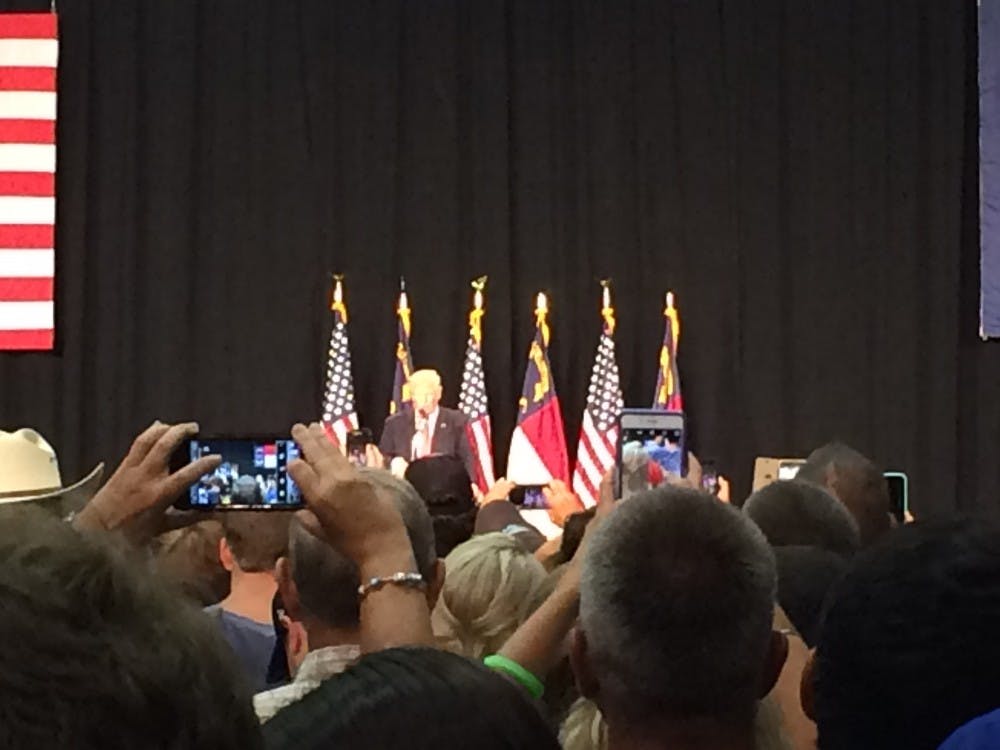 He spent most of the rally at the Winston-Salem Fairgrounds discussing the economy and criticizing his Democratic rivals, including soon-to-be presidential nominee Hillary Clinton, her running mate Tim Kaine and former Democratic presidential hopeful, Bernie Sanders.

Trump said he plans to bring jobs back to states, like North Carolina, that lost jobs to countries with cheaper manufacturing such as Mexico and China. He cited Apple in particular, saying he will force them to make their product in the United States.

Trump also disavowed the Trans-Pacific Partnership (TPP) and the North American Free Trade Agreement (NAFTA) and says he will be a better negotiator than Clinton.

"I'm a person that wants to make great deals for our country," Trump said.

Trump noted Clinton could have picked a more progressive running mate after Sanders' popularity during the primary, but instead chose someone more moderate.

He also critiqued Kaine's policy on refugees. Kaine supports Syrian refugees emigrating into the United States while Trump says he would establish safe zones in Syria instead of allowing them to enter the country.

"We don't know where these people are coming from," he said.

Trump said Sanders "gave up" after endorsing Clinton. He told the crowd he could get Sanders supporters to vote for him over Clinton in the fall.

He also discussed the success of the RNC, praised his family's speeches and criticized how the media interpreted his acceptance speech.

Trump told supporters he will take care of law enforcement and bring back law and order if he becomes president.

Trump's running mate, Indiana Gov. Mike Pence, was also in attendance and said he and Trump both stand with law enforcement and will not settle for less.

"Donald Trump knows the American people are tired of being told it's as good as it gets," Pence said.

Trump promised supporters that he will be back in North Carolina in the future.

"I'm gonna be in North Carolina so much that you are going to get so sick and tired of me," he said.

This was Trump's third appearance in North Carolina in the past 43 days.

McCrory was the only speaker to mention House Bill 2.

"And if you need to use the restrooms...if you have any questions you can go to Philadelphia where the Democrats are," he said.